A Conversation With Darius Arya—Classical Archeologist and Filmmaker

“There is nothing newer than looking at the past,” said Darius Arya, Rome based archeologist and filmmaker. For Darius, Rome is more than ancient history, it is living history and an ongoing story that Darius takes to lecture halls, the field and the big screens.

“Everyone dreamed of being Indiana Jones,” Darius said. “I figured I’d just do it. I wanted to be knee-deep in ancient inscriptions and underground sites, so I started with Latin.” While studying Classical Studies at University of Pennsylvania, Darius was accepted to participate in a semester in Rome at the Center for Classical Studies. While his focus was Greek and Latin, Darius was captivated by the active history all around him, which inspired him to continue his education with a Masters and PhD in Classical Archaeology at the University of Texas at Austin. He was awarded a Fullbright Scholarship at American Academy in Rome.

What anchored and still anchors him to the Eternal City is the unique comparison of past and present in its art, architecture and culture. “I tend to look at Rome from the past, like 2,500 years ago, and I constantly see those threads in contemporary life both here, as well as around the world,” said Darius.

His passion for classical studies and architecture is unstoppable, and over the past two decades, he’s done everything to share it. As Director of American Institute for Roman Culture, a non-profit that fosters conversation on Rome’s extraordinary cultural legacy through education, outreach and multi-platform storytelling, Darius created several education and new media initiatives. As a documentary filmmaker, he hosted the 2018 show “Ancient Invisible Cities” featured on PBS, and currently hosts the ongoing Italian television series “Under Italy.” (RA15)

I asked Darius a few questions 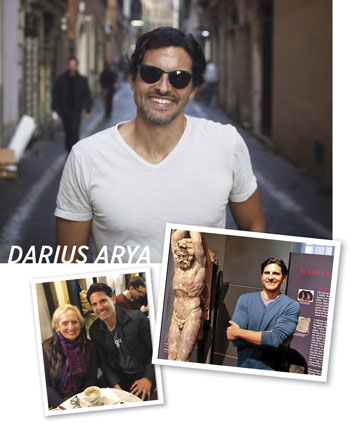 about his fascinating work:

What has been your biggest archaeological surprise?
A personal favorite and most fulfilling find came from a dig at the Park of the Aqueducts, a public park less than eight miles from the center of Rome. The park itself is amazing with its mile-long arcade of ancient aqueduct Claudio. We were in our third summer at excavations, already having uncovered a 50,000 square-foot, lavish bath complex with multiple stories and chambers and lots of in situ marble paneling. We were halfway through the day unearthing beautiful statue fragments when we uncovered a colored marble head. As we progressed, we realized we had an entire intact statue of the highest quality—a second century AD, red marble statue depicting Marsyas tied to a tree with beautiful, detailed musculature and one remaining bronze inlaid eye. I was so concerned about its safety, I decided to sleep in the trenches that night for fear of looters. We extracted the statue the next day with a small crane and transported it to a warehouse for safekeeping. After a thorough restoration and cleaning, the Marsyas is now on permanent public display at Capitoline Museum Centrale Montemartini.

What is the biggest challenge?
Archeology is slow work—lots of study, research and documentation.

What is next on your list of accomplishments?  Keeping the next generations interested in classical studies! Visual storytelling is an essential component to social media and is integral to archaeologists and historians. It brings the audience directly to the material culture based in Rome, which is hands-down the most photogenic city in the world. It is easy to share images and live stream from the ancient world using social media. It’s an opportunity to expand and share knowledge and insights and interact directly with a global audience who has questions and wants to learn. History, art, architecture and the people of the past who created it all are coming alive to the next generations.