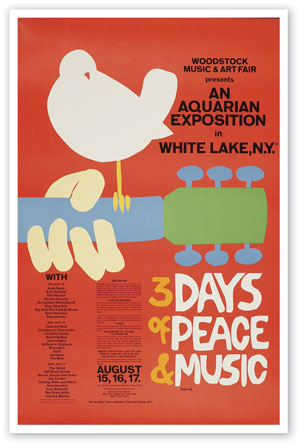 Woodstock was a music festival held August 15-18, 1969, which attracted an audience of more than 400,000. Billed as “An American Exposition: 3 days of Peace and Music,” it was a held at Max Yasgur’s 600-acre dairy farm near White Lake in Bethel, New York—43 miles southwest of Woodstock.

Over the sometimes rainy weekend, 32 acts performed outdoors. It is widely regarded as a pivotal moment in popular music history, as well as the definitive nexus for the larger counterculture generation. Rolling Stone Magazine listed it as No. 19 of the “50 Moments that Changed the History of Rock and Roll.”

The event was captured in the Academy Award-winning documentary film Woodstock, an accompanying soundtrack album, and Joni Mitchell’s  song “Woodstock,” which commemorated the event and became a major hit for Crosby, Stills, Nash and Young. Mitchell said, “Woodstock was a spark of beauty, where half-a-million kids saw they were part of a greater organism.” In 2017 the festival site was listed on the National Register of Historic Places.

Woodstock was designed as a profit-making venture. It became a “free concert” only after the event drew hundreds of thousands more people than the organizers had prepared for. Tickets for the three-day event cost $18 in advance and $24 at the gate; 186,000 advanced tickets were sold.
In April 1969 Creedence Clearwater Revival (CCR) became the first act to sign for the event agreeing to play for $10,000. Once CCR signed, everyone else jumped in line, and all the other big acts came on.

There were difficulties with the town to get permission for such a festival, but in the end there wasn’t much they could do to stop the influx of folks to Yasgur’s farm.  Yasgur’s land formed a natural bowl sloping down to Filippini Pond on the land’s north side. The stage would be set up at the bottom of the hill, with Filippini Pond forming a backdrop…and a popular skinny-dipping destination.

On the morning of Sunday, August 17, 1969, New York Governor Nelson Rockefeller called John Roberts, the festival organizer, and told him he was thinking of ordering 10,000 New York State National Guard troops to the festival. Roberts was successful in persuading Rockefeller not to do this. Sullivan County was declared a state of emergency.

Richie Havens opened the concert. The last act was Jimi Hendrix. Those in between ranged from Santana, Sweetwater, Arlo Guthrie, Joan Baez, Country Joe and the Fish, Sly and the Family Stone, The Who, Joe Cocker, Blood, Sweat and Tears, Jefferson Airplane and many more—32 in all.

After the concert, Max Yasgur saw it as a victory of peace and love. He spoke of how the gathering of nearly half a million people could have been filled with potential disaster, riot, looting and catastrophe. Instead the attendees spent three days with music and peace on their minds. He stated, “If we join them, we can turn those adversities that are the problems of America today into a hope for a brighter and more peaceful future.”