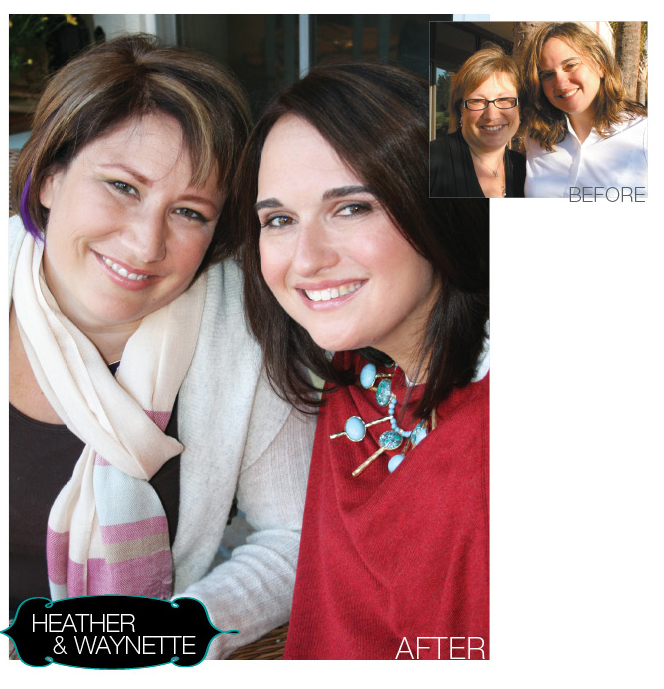 William Shakespeare once wrote, "A friend is one who knows you as you are, understands where you have been, accepts what you have become, and still, gently allows you to grow." For two women, Waynette Payne and Heather Steele, this couldn't be more true. These life-long friends met for the first time in middle school. After graduating from Beaufort High School, Waynette married her high school sweetheart and Heather moved to Columbia to finish school. As it often does, life happens and people go their separate ways. Heather found herself in Pennsylvania for a brief time, but when she moved back to Beaufort ten years ago, these two kindred spirits once again found each other, and have been inseparable ever since! ?

The two friends walked into Haircutechs together, their excitement apparent. The salon owner, Marcela Suaza introduced the ladies to their personal stylists for the day, asking them if they'd like coffee. Haircutechs is a modern and chic salon, gracing the Lowcountry with a staff that is as knowledgeable and capable as they are enthusiastic and beautiful. The stylists, Venesha Cochran and Amber Steedley, instantly made Heather and Waynette at ease, putting their expertise to work!

Waynette's Look: "My hair doesn't know what its doing! I have a Cherokee dad and a little red-headed Irish mom," Waynette laughed. "My hair has changed since I've had kids. It was really straight and
really long. Now it won't grow as long and it's wavy."

The mother of three usually hops out of the shower and hits the ground running. "I don't wear makeup on a daily basis. It's literally get up and go. I don't have a lot of time to get myself ready." Venesha surveyed the growing out highlights Waynette was donning and made the decision to darken her hair to a deep brown. "I'm reversing out the old highlights and creating rich mocha highlights underneath.

This way she won't have to deal with new growth." After the color had set and was rinsed out, Venesha began cutting layers to add volume to the style. She took four inches off! "When your hair changes, you have to change your approach to it." explains Venesha. "It's a very versatile look and a great update for a mom. She can still get a clip in it or wear it down, depending on the activity." Waynette's new do instantly elongated her face, and by cutting the dead weight, her hair became shinier and healthier.

Bridgette Hernandez, who I have dubbed the "makeup guru," is a true artist. She uses a person's face as a painter uses a canvas; their features become a living part of the painting. She began by waxing and tweezing Waynette's eyebrows. For Waynette, Bridgette rendered a dramatic look applying colors from the "spices" color palate. For the eyes, Bridgette focused on the inside contour because her eyes are big. In doing this, her eyes look smaller, yet still open. She applied sheer satin eye shadow on the lid, and black eye shadow on the contour and in the corners of the front corner of the eye, with black eyeliner. She used clear mascara to keep her newly shaped eyebrows in place. Next came the blush, lip liner, and long lasting lip gloss to finish off her beautiful new look.

Heather's Look: As a mother of two, Heather also has little time to keep up a morning routine. "If I have time for makeup, I do it. It's usually a fight to get everyone out the door by 8 a.m. Colored eyeliner is the bravest I get when it comes to makeup." Heather came into the makeover with short hair, so Amber's goal was to freshen the look. "I wanted to give Heather a richer color to bring out her fair skin tone and to make it look soft and healthy with subtle highlights" Amber explained. After she colored Heather's hair, she began cutting layers to give her more body and texture. "I want to give her an edgier look."  Amber masterfully darkened the eyebrows to make the eyes pop and darken Heather's fair skin tone. Amber added a purple streak in Heather's hair because November is Alzheimer's Awareness Month and her mother is the Executive Director of the Alzheimer's Family Services of Greater Beaufort.

Bridgette gave Heather a more moderate look by using the hemisphere color palate, which concentrates more on the eyes. Bridgette applied foundation and dark eye shadow on the contour to bring out her eye color that blends with greens, browns and bronze. Using bronze eyeliner she shaped the eyes making them appear open and expanded. Bridgette then adds the lip liner, lip stick and a top layer of lip gloss to finish off the look. She had so effortlessly created two masterpieces before my eyes!

The Clothes: Heather: To highlight her new look created with earth tones, Heather wore a brown tank top with a cream sweater. To accent her purple extensions, Anna Pepper Hewett, owner of Gigi's Boutique in Bluffton wrapped a beautiful scarf with purple hues to complete the look! Waynette: Her new rich, brunette locks went perfectly with a deep brick colored poncho. To add some drama and contrast, a turquoise necklace was introduced. The two friends were sexy and stylish!


Funniest friendship story? "We were in Yearbook together in high school and we had to go out and sell ads. We put a bunch of kids in the trunk of the car and just laughed and laughed. My kids know that story..they've just been warned NOT to do it!" Waynette giggled.

Do you have any friendship rituals? They try to go out together once a month with no kids, no husbands and just sit and talk, maybe get some food or a few drinks. "We've tried to incorporate other people in the past, but we have a lot of fun as just the two of us!" Heather stated. They call it "Mommy's Night Out."

Fun Fact of The Cat Venesha and Amber, the two stylists that transformed the girls, aren't just co-workers.they're SISTERS!

Pink Magazine would like to extend a very warm thanks to all those
involved in the November makeover. To schedule your own day of pampering stop by Haircutechs, located at 102 Buckwalter Pkwy, Bluffton, in Buckwalter Plaza, or you can make an appointment by calling 843-757-6210. Also visit www.haircutechs.com and follow Haircutechs on Facebook. Gigi's Boutique is located in beautiful Old Town Bluffton, at 40 Calhoun Street. Stop in to try on some of the freshest looks or call 843-815-4450. To be considered for a future Pink style takeover, send a brief statement and photo to This email address is being protected from spambots. You need JavaScript enabled to view it..