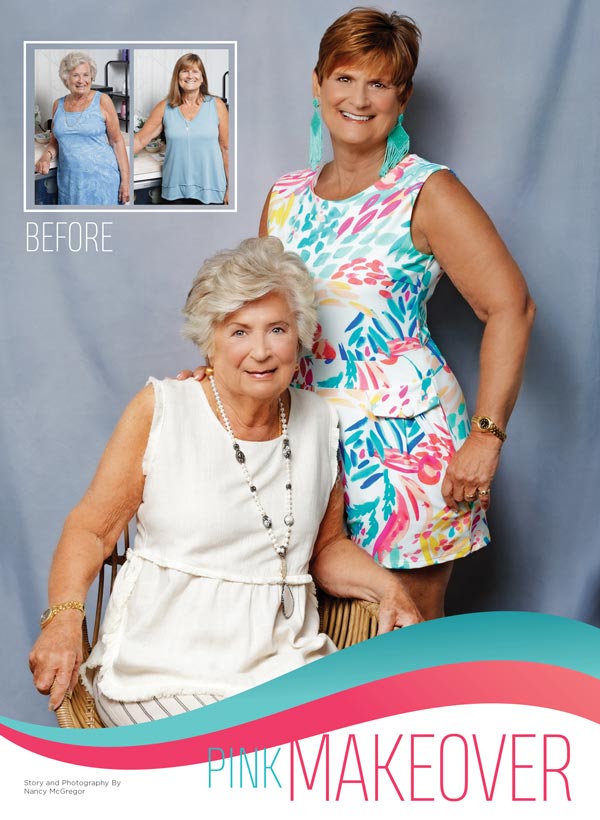 May 2022 Issue
Story and Photography By Nancy McGregor

In a celebration of motherhood, our renewed makeover feature turned its attention to an ultimate mother.

When Pink Publisher, Elizabeth Skenes Millen, asked her Facebook friends who needed a makeover, there was one particular voice that replied “Yes!” from her mother’s Facebook page. Shortly after, her mother chimed in and replied “She really does!”

Our attention was arrested by this mother, Karin, who wanted something pretty and special for her daughter, April. It was a generous and sweet thing. It was something a mother would do because when we look at the concept of motherhood, we’re really looking at unconditional love in action.

So our hearts had no choice. We chose them both for the makeover.

We already know a little about Karin because we featured her in Pink Magazine many years ago. To reintroduce you, not only is she a thoughtful mom, Karin is also an amazing foster mother. At age 91, she is only one infant away from fostering 100 babies. She’s been nurturing our smallest and most helpless humans for three decades. Karin has taken the time and her golden years to give that unconditional mothering love to babies who would have had none without her. She’s stepped in and held these infants safe against a cruel world that abandoned its duty to protect the innocent. Karin murmurs softly into tiny ears and sings gently to reassure a tiny soul that hope is real and unspoken prayers cried out in fear are heard.

Then, there’s Karin’s daughter, April, who is a 68-year-old wonder woman with a background in radiology combined with a stint in the Cardiac Cath Lab. She also traveled the world as a Club Med Water Skiing teacher. When she was 34 years old, she adopted one of her mother’s infant fosters when he was 2 years old. He’s now 30 and doing well in the field of Information Technology. These days, April is retired and tending the garden with her mom. They haven’t fostered an infant in their home since last May but are up for the challenge any time the need arises.

We think their story is outstanding, and so did the volunteers for this makeover. 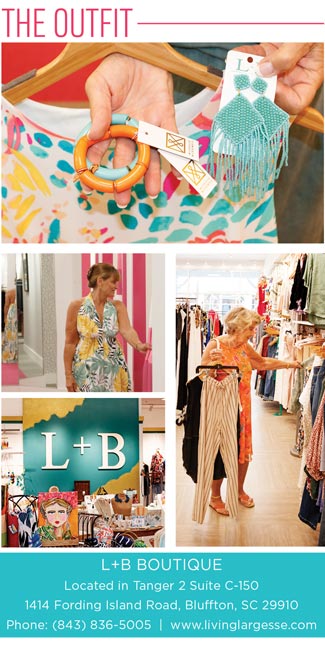 L+B Boutique said absolutely we want to celebrate Mother’s Day with you. Whip Salon owner, Amy Pal, jubilantly raised her hand. Makeup artist, Kathleen Duvall, packed her cases and drove over an hour to join in. And me. I’m the photographer and writer who is documenting the entire event.

We began at L+B Boutique in the Tanger 2 Outlet Mall. This is a locally owned boutique with a second store in Rincon, GA. This store has elegance and comfort tucked into every corner. It offers variety for both body and soul in its carefully curated selection of items for yourself and your home. The most amazing thing is, however, they are a faith-based boutique. In the back of this location is a Prayer Wall. Visitors write down items for which they need prayer and hang the request on the wall. It’s an undeniably sweet and powerful heart who decided this needed to be an integral part of this shopping excursion. L+B says their goal is to “encourage and help every woman possible who comes in our store. We hope they leave our store not only with something pretty, but with a new found confidence and love in themself. ‘We love because he first loved us.’ 1 John 4:19.”

After trying on several garments and styles, Karin and April made their selections. It was time to proceed, and so, after a consultation about hair, the process began. 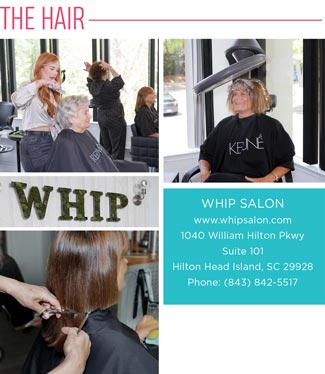 Whip Salon is a newcomer to the Lowcountry’s beauty scene, but it arrives comfortably experienced with three sister locations in Connecticut and a celebrity stylist on board. Amy Pal opened two salons and franchised a third in Fairfield County, Ct. These are full-service salons, and they have an arsenal of options. You can acquire anything from a simple blow out, including blow out membership, to a full makeover. In February, Whip found and optioned the amazing Dennis Stokely. Dennis was the hairstylist for Paula Abdul on seasons 7 and 8 of American Idol. His work has been strutted on the red-carpet at the Oscars, Emmys, Grammys and Golden Globes. Not to name drop but we know a few of his clients are stars like Martha Stewart, Carmen Electra and Eva Longoria.

For our monthly makeover celebs, Karin had a cut, glaze and blow out, plus styling for soft lift and curl. April went dramatic with color and a short style. You’re in good hands with the expertise available at Whip Salon. Let them guide you in the quest for your individual hair looks. 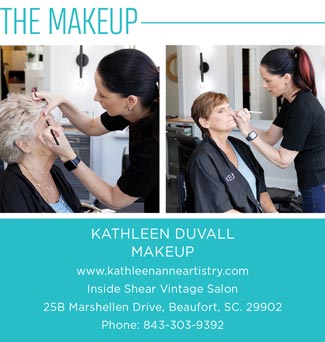 Then, Kathleen Duvall unpacked her makeup cases and set off to work. Kathleen is licensed in South Carolina as an esthetician, which means she knows about the many layers of skin and its healthy treatment before she begins applying makeup. She can work in any salon or medical spa in the state, but she has her own business where she’s the exclusive esthetician for her clients. She does wedding makeup, special events and works with local photographers on fashion, editorial and business sessions. She also gives lessons if you’d like to learn.

We think our Mother’s Day makeover went beautifully, and we thank all of the business partners who made it happen and our mother/daughter recipients, Karin and April VanName.