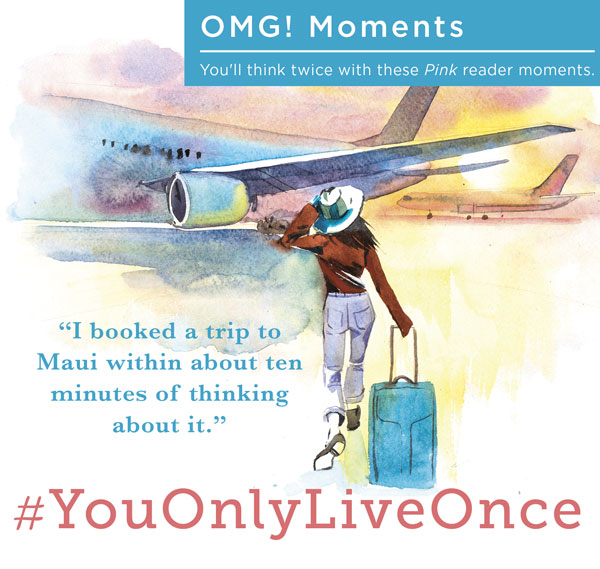 “I decided that instead of riding on the back of a Harley, I wanted to ride my own. I found a safety course, which I passed, then got my own Harley weeks later. I’ve been riding for 26 years now!”

“I did a Lucille Ball in the kitchen. I owned five restaurants and had just ordered two thousand dollars of fish from Charleston, but when I opened the refrigerator it was hot and the fish were spoiled. It was the last straw. I started throwing plates, food and pans until one of my employees found me in a pile on the floor—crying. He ran out and got my husband, who said we would close the first of the year. My goal was to never have another employee, and so I became a sculptress.”

“I decided I needed a vacation, so I went to the airport and bought a ticket to London. I just winged it and had a great time!”

“I was featured on Jerry Springer… twice!”

“I went to Chernobyl (in Ukraine) to volunteer with government military organizations. Unfortunately,
everyone I volunteered with DIED! I went back three years later for more excitement. I didn’t care about the exposure, I took NO precautions, and I’m still alive!”

“My first time as a widow, I went on a trip all by myself. I knew that I could make it and be okay!”

“Getting married in Vegas—BAD IDEA! Flying 5,000 miles for a blind date—GOOD IDEA!”

“After being diagnosed with breast cancer, I began to live my life. Didn’t matter if house wasn’t perfect, or the laundry wasn’t done. I just started living:)”

“When I was yelling at the top of my lungs from Mt. Everest!”

“I am planning a trip to Colorado—all by myself. I am staying in a hostel and I’m going to bike to over 14,000 feet!”