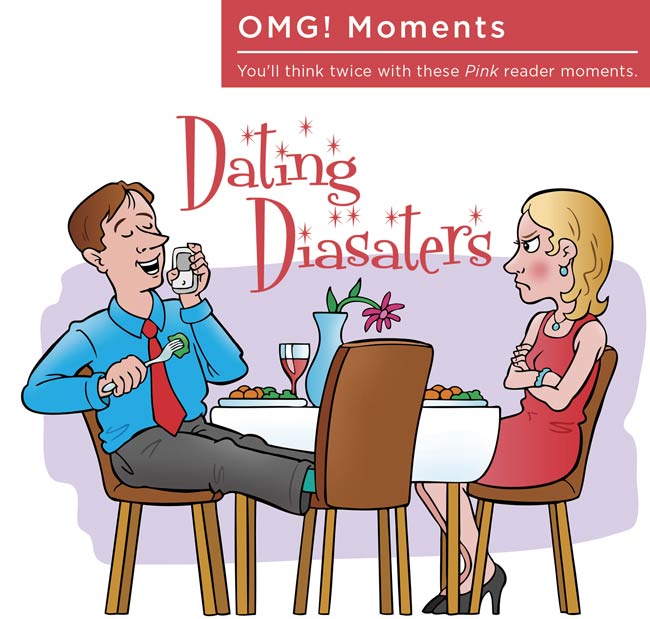 “I met a really nice, well-educated guy back in my single days of the early ‘70s.  He turned out to be a warlock. He put a spell on my roommate and the following week she lost her job and her cat died!”

“I dated two guys at the same time. When they both showed up at my house at the same time, one held me down, while the other wanted to cut all my hair off so no one would date me. LOL! It didn’t happen. I still have all my hair!”

“My blind date was so short he asked me to take my shoes off for a kiss.”

“I met a guy on match.com while in Atlanta. We met at Ruby Tuesdays; his table manners were awful. Plus, he was dressed horribly. Needless to say, I never saw him again.”

“My friends and I were at a party, and we were feeling pretty good. We were about to leave, so they convinced me to go lay a big kiss on a girl, who had been eyeing me, and then walk out. I decided I was up for the challenge. I walked up, grabbed her and gave her a big kiss, then abruptly ran into a glass panel that knocked me flat on my back. So much for my macho exit!”

“I was in San Francisco on my third dinner date with a film producer. The first two dates he ordered soup, and I had a three-course meal. Again on date three, he ordered soup!  I said, “Why aren’t you eating?  Are you on drugs, or can’t you afford this?” He pulled out a wad of $100 bills, threw them in the air so everyone turned and looked, and shouted, “Does this look like I have no money?”

“I am a twin and was fixed up by my sister and her boyfriend. We double dated for dinner. The party was lagging so we girls went into the washroom and switched clothing. Back at the table the boys were so uninterested they didn’t even notice!”

“Blind date: We met at the beach at 1:00 p.m, and he was on already on his second PBR.  He wasn’t working because part of his arm was eaten off by flesh-eating bacteria. He had ridden a bike because he didn’t have a car, and he lived with his mother, where he had to climb through the window because she lived in assisted living!”