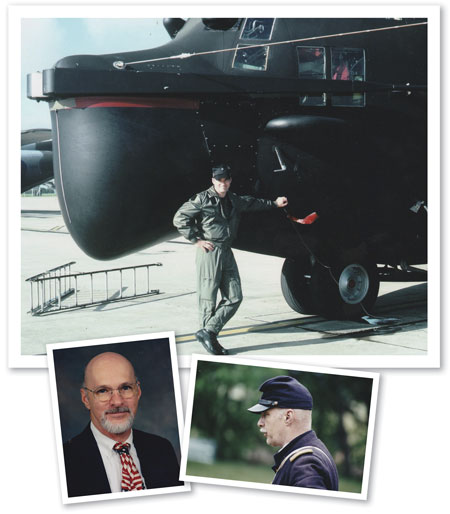 July is the perfect month to recognize and remember the ones who fight, and have founght, for our country. Stephen Bacon (Steve) not only served our country in the military, but still serves through the outlet of education for the past 29 years.

His story starts with a small history lesson. His grandfather was a “doughboy” in World War I; his father was a World War II veteran and Korean War pilot. With such strong role models, it was only natural for Steve to follow his lineage. At age 19 he joined the Army, and his life was changed forever. From the get-go, he was given much responsibility: His very first assignment: “Babysit” 18 Nike Hercules Missiles. (Look them up and be prepared to be impressed.)

Now with a wife and child, Steve enrolled in a multitude of schools and programs, which earned him two graduations: One from navigator school and the other from electronic warfare school. He also holds degrees in geological engineering, a Masters in international politics and business, and a Masters in military history. When his education came to a stopping point, he transferred to the Air Force, where he was stationed in Germany and became a member of the 7th Special Operations Squad.  Earning the title of 1st Lieutenant, Steve’s life seemed to be cruising in the fast lane, but quickly halted when assigned directly an Iran hostage rescue mission attempt. He lost five of his fellow soldiers, some of his closest friends.

Being away from his family approximately 270 days of the year and dealing with such intense operations, Steve started growing apart from his wife. Sadly the marriage couldn’t sustain itself with all its hurdles and “baggage.”  Shortly after divorcing, a new mission moved him back to the States to Headquarters Rescue, where he served 14 years and met Brenda, the love of his life. The two have now been married for 31 years and have five children: one from Steve’s first marriage; two children with Brenda and they adopted two more.

With so much expertise in different fields, it was hard to keep Steve on one mission for longer than a few years. His skills were recognized and put to the test when the Air Force asked him to be part of creating the 23rd Air Force. In simple terms, this meant the uniting of special operations with rescue operations worldwide—an operation still active today.

From there, Steve was stationed at the headquarters of the Military Airlift command. This was his favorite mission because he got to fly in MG130E combat planes. “This was one of the most interesting parts of my life. We were flying dark planes, at  low altitudes, in the middle of the night—flying weird people to weird places. It was crazy! To this day I cannot reveal any information; it was that classified of a mission.” After racking up 1,850 flight hours in six hectic years, Steve served his last mission teaching as a commander at an Alabama squadron officer school, working with over 120 students. This job pulled back a curtain to view a brand new era of his life. Sadly, here ended his military service reign, retiring as Major Bacon.

Steve had dipped his toe in the teaching pool, which would soon fill up with a multitude of opportunities at a number of schools, transitioning the badge on his shirt from Major Bacon to Mr. Bacon. He became a sought after teacher. A military college in Georgia, Wentworth Military College in Missouri and Howe Military College in Indiana all had the privilege to share “the Bacon magic” with their students. Steve’s teaching career lead him to Savannah, GA,  where he became the head chair of the history department at St. Andrew's School until he decided to retire from teaching and build another career path—real estate.

Steve looked  at me and laughed, “Guess how many houses I sold?” At the same time we both held up zeros.

At this point in the story, he has been out of the military for 11 years. One day tragedy struck, as the incredibly sorrowful terrorist attack of 9/11 became an American reality. Steve didn’t hesitate one second volunteering to go back into the Air Force. He served four years as a history teacher at the Air Force Academy in Colorado Springs, CO, sparking memories of his younger service years. Finally, he decided to re-retire and settle down in Bluffton, SC, where he currently teaches online at The American Military University and locally at Technical College of the Lowcountry, which happens to be where our paths crossed; he was my history teacher—Mr. Bacon.

Alongside his wife, 5 children, and now 11 grandchildren, he is loved by all, especially his students. From my experience, he could arguably be one of the best teachers I’ve had. He teaches for one purpose only: The students. “I believe students today are in trouble academically, and I’m trying the most I can to help them achieve the best they can,” he said.

Mr. Bacon prides himself on being a hands-on teacher, helping students thrive and experience the world. Over the years, he says he has seen a serious downgrade of the quality of students, and that’s why he hasn’t quit. He refuses to give up on students, helping them enjoy learning and being the best they can be.

“I take a group of high schoolers and college students to places all over Europe with chaperones, kind of wherever they want to go,” said Steve.

He shared one of his favorite memories from one of these trips: “I took some of my Air Force Academy cadets to Paris. We got to visit the beautiful city, Normandy’s  D-Day beaches, and we had the honor to place a wreath at the American Cemetery, which was a tear fest,” he chuckled. On another trip, he took a group to Belgium to see Waterloo and then up to Germany to see WWII museums and the remains of concentration camps. Lastly, one of his groups was invited to Luxembourg by the Ambassador, another of his fondest memories.

Steve is active in the Beaufort County community, as well. He is a soccer referee for the Island Rec Center and a volunteer tour guide at the historical Heyward House Museum in downtown Bluffton.

Mr. Bacon is not any ordinary teacher, and not your average guy, either. He has lived a unique, experience-driven life to its fullest. He and his wife have been on 13 cruises and have one planned, traveling the Baltic Sea. He told me if they “get their ducks in a row” they will be booking a trip to Rome, Athens and a true gem, Jerusalem, which is a place Steve has always wanted to visit.

People strive to live their lives to the fullest, with their bucket list in hand. Steve Bacon’s bucket is full, but as a man on a mission, he is a master at filling it even more.

Jack the Ripper: Steve could be considered a scholar on topics such as The Crusades, World War II, and he is a member of the Inner Circle, a group that studies the actions of the infamous serial killer, Jack the Ripper.

Spotlight: Steve can be seen as an extra in five movies, including Gettysburg and Andersonville. He was cast for these spots due to his experience in being a Civil War re-enactor.

Any Travel Advice?: “Go to the Philippines, the color green is everywhere, and it is brilliant. When in South Korea, don’t eat garlic— the main way to travel is by train and they are jammed packed. Go to Bodo, Norway; it’s one of my favorite places in the world.”