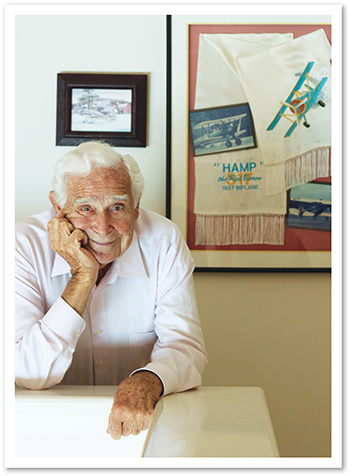 Hamp always had aspirations to become a pilot. “I wanted to be a lieutenant because the uniforms were beautiful,” he said. Instead, his seat was in the back of a dive-bomber as a gunner. The ship he was waiting on for deployment was sunk in Panama, and along with it, sunk his active duty in WWII. Instead, he attended medical school in Richmond, VA, and practiced dentistry for 30 years in Rochester, NY.

Retirement came after his long and successful dental career, and he and his wife Jane moved to Hilton Head. His son, Murray, was an executive at upscale hotels, which inspired Hamp to become a maître d’. “Nobody would hire me. They said I had no experience,” he chuckled.

Bored with retirement, he opened a dental office on Hilton Head, where he practiced for 30 more years. You may recall the dental office on William Hilton Parkway, near the Sea Pines Circle, that always had Santa Clause in the window at Christmas. Well, that was Dr. Hamp’s. His patients loved him.
Just because his dream of being a pilot in the military didn’t pan out, Hamp didn’t let that stop him. He became a pilot, owned several planes, and kept a hangar at Hilton Head Airport. “I used to put on my white scarf and goggles and fly up and down the beach,” he said.

“His hangar was like a museum,” said Lindsay Burnett, his daughter, who lives locally and co-owns Calibogue Catering. “I’m a terrible collector,” Hamp responded.

Both Murray and Lindsay showed up for Hamp’s interview. They are two of four children, and their admiration for their father is transparent. “I wrote an article one year on Father’s Day about Dad. I have the greatest father. He is an achiever, and he took care of everyone,” Lindsay said.

Hamp chimed in, telling us how much he loved his wife. They were married 62 years before her sudden death a few years ago. He still thinks she’s the most beautiful woman he’s ever seen. “We never had an argument. She was a good mother. Raised those kids and kept the books. The secret to our happy marriage is she let me have her way,” he said with a mischievous grin and a filled heart.

Being a collector of all sorts, Hamp was able to experience something extraordinary. A friend from his military days, who was on his deathbed, called Hamp and told him he had some things he would want; it was a rifle, a pistol, maps, silks and a flag with a red circle symbolizing Japan. These items had been taken from a dead Japanese pilot after his plane was shot down during the war. Hamp discovered the flag was a sash all the Japanese pilots wore. He took it a step farther, contacting the Japanese Embassy, and locating the pilot’s family. He and Murray flew to Seoul, then travelled to Miharu and personally delivered the remnants of their loved one back to the family, who was honored at such an act of compassion and peace. 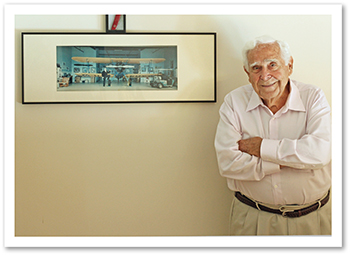 After hearing Hamp’s stories and realizing what a whole human being he is, I had to ask if he had a secret to living such a happy, fulfilling, amazing life. He began quoting a poem from memorization: “You don’t have to tell how you live each day. You don’t have to say if you work or play. A tried, true barometer serves in the place. However, you live, it will show on your face. The false, the deceit, that you bear in your heart will not stay inside where it first got its start. For sinew and blood are a thin veil of lace. What you wear in your heart, you show in your face. If your life is unselfish, if for others you live, for not what you get, but how much you give. If you live close to God in His infinite Grace, you don’t have to tell it, it shows in your face.”

Hamp’s genuine spirit and gentle light filled the room. We walked over to the white grand piano where he showed me old notebooks filled with positive affirmations, including lessons from Napoleon Hill, who he started studying in 1940s. Hamp’s long life and happiness was not by mistake or luck, Hamp and Jane purposefully and thoughtfully designed their life.

“I’m a continuous student of life and since early in my practice I got exposed to a doctor who was practicing positive living. I learned by balancing worship, play, work and love, I would have a successful career and a happy life,” Hamp said.

And you know what? He most certainly has.