Dedicated to Organic Gardening for Life 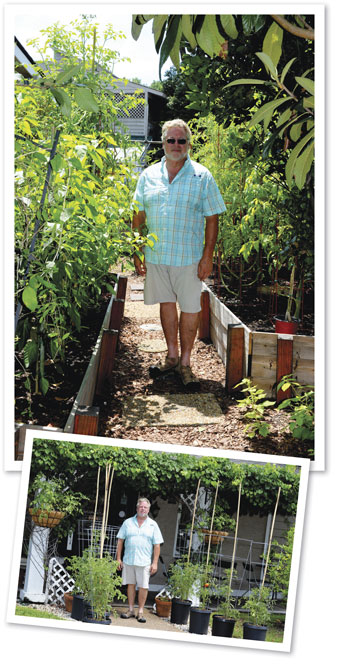 If Brent Wearren were a plant, he would be bending at every bow with fruit. Affectionately known as “Farmer B” by his understudies, Wearren is one of those people who overflows with energy and knowledge that he cannot wait to share. He has dedicated the rest of his life to organic gardening and to passing on his masterful skills to the next generation.

“My mother said that even as an infant I was always grabbing plants and staring at them,” affirms the Kentucky native and third-generation cultivator who now resides in Bluffton. “I don’t always understand humans, but I understand the plant kingdom. I live, eat and breathe plants.”

From the age of 2 or 3, Wearren was already shadowing his father and grandfather in the greenhouse, where the musty smell and heat from the woodstove were synonymous with comfort, and stories told by men around the grafting table were soaked into his grain. He went on to become the largest commercial grower of ornamental deciduous trees in Kentucky, planting 40,000 trees a year and shipping to sixteen different states. But it was his love of organic food gardening—learned from his paternal grandfather who never tagged himself with fancy labels when throwing manure on the garden—that was to endure the longest.

“No matter how busy I was, I always found myself going back to my garden in the evening,” said Wearren, who raised his family on the produce he grew. “There was a sense of peace and serenity there.”

In 2008 when the recession hit, Wearren was forced to shut down his commercial operation after 34 years in business. But as with many such life changes, it contained the seed of new growth. In 2014 Wearren and his wife got a fresh start in the Lowcountry, where they had been vacationing for years. Wearren took a job at a garden center and felt relieved to be “just some guy from Kentucky who knew a lot about plants.” He acclimated to the new climate and growing season, learned about local crops and pests. Later his son, owner of the vegetarian eatery Delisheeyo on Hilton Head, gave him the project of transforming the restaurant’s exterior into an edible sustainable landscape.

“I’m always trying to think out of the box, come up with something creative and aesthetically pleasing but also practical,” said Wearren, who put in everything from kale and chili peppers to pink guavas and lemongrass around Delisheeyo. A muscadine grape arbor and hanging cherry tomato baskets beckon diners through the front door. Meyer lemons, key limes, cold-hardy satsumas, culinary herbs, blackberry vines braided around a little fence, even raspberries and goji berries adorn the landscape. Semi-wild plants such as ground cherries and aloes hold their own, while more sensitive specimens like avocado and passionfruit command Farmer B’s special attention. The signature trellis he designed in a galvanized washtub—which withstood Hurricanes Matthew and Irma—has watermelons hanging from it in ladies’ pantyhose!

This one-of-a-kind environment attracted a lot of attention, and soon Wearren began his own organic gardening service, going to people’s homes and businesses as a hands-on consultant. Yet it’s evident that his true passion is the work he does as Farmer B, teaching children at May River Montessori to grow their own organic produce—and all the values that go along with that.

“My main focus right now is passing on the knowledge that was freely given to me,” he says. “I feel like it’s my responsibility. A lot of kids today don’t know where their food comes from; they haven’t been shown. But they are eager to learn, and they care about the journey, the process. Even after fifty years of doing this, I still get excited when I see a seed germinate and emerge.”

In Farmer B’s class, it’s not just about gardening—it’s about life skills. He teaches kids “The 3 Ps”: patience, persistence and perseverance, which he says lead to success. Germination rates and even crop failures are important teaching moments. He instills values like accountability, honesty and work ethic—what it means to get up early, put in a hard day and reap the rewards—and especially generosity.

“We practice sharing,” says Wearren, who hopes everyone will introduce a child to gardening, whether in a small pot or simply by talking to farmers at the market. “The earth gives to us, we give to others. The word ‘mine’ is not used in my garden. We plant together, harvest together and consume together, and 25% of our crop is donated to the local food bank.”

As for the adults he teaches through his consulting business and workshops, Wearren encourages them to see solutions rather than problems. “Get rid of the fear of failure,” he advises. “People tell me, ‘I kill everything I touch,’ and I say, ‘You’re not that powerful.’ The earth is very forgiving, plants are very resilient, and we garden to gain peace, not stress.”