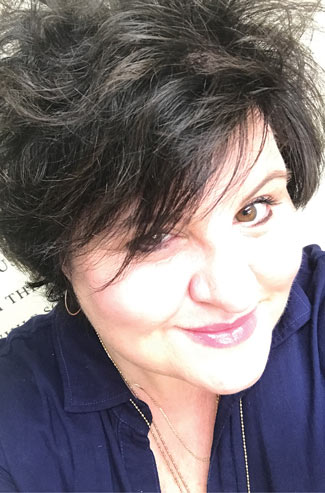 "Clean out a corner of your mind, and creativity will instantly fill it.”
—Dee Hock—

In founding the women’s publications Pink Magazine 18 years ago, and Paisley Magazine 14 years ago, I have talked to some women throughout my publishing journey—thousands and thousands of women to be more descriptive. What I have found is a common thread amongst the majority of women—most give too little to themselves. (Of course, there are always exceptions to the rule.)

Now, let’s park that thought and give creativity some air time. The theme of this month’s issue is #CreativeMinds and features mega-talented, creative women and other ways to perk up through creativity. However, I can’t tell you how many times I have heard women—and men—state: “I don’t have a creative bone in my body.” (Though men don’t use those exact words…) I’m here to say almost everyone has some talent, and grows that talent over a life time, thus exhibiting creativity in the growth itself. No one really ever counts this as creativity, but it is. Give yourself credit.

If you won’t, I’m here to fight for your creativity and convince your mind to release it and let it roam freely. When you think of creatives, people such as Georgia O’Keefe, Madonna (you have to give her props for creativity), Tina Fey or Banksy may come to mind. But what about stoics like Steve Jobs or Albert Einstein? They aren’t creative, are they? They are mathematical, technical, uptight, serious, all business.

Yes, Einstein and Jobs were those things, but they couldn’t have done any of their magic without creative thinking. I have no idea if they could sit down and paint like Monet or sing like Pavarotti, but that’s where we all go wrong in stereotyping if we are creative or not. They didn’t have to paint or sing. Their creativity came in non-traditional ways. Not all creativity has to be rooted in art. Have you ever heard, “If you judge a fish on its ability to climb a tree, it will go through life thinking it’s a failure”? I believe this is how people who think they aren’t creative have been judged, and thus they have adopted the shadow belief of “I’m not creative” as truth.

In today’s busy-ness and high-stress daily climate it is difficult to be creative. Creativity is like sex, you have to give it thought, time and space to materialize. I have found my most creative thoughts come during my most mindless times, like while getting a massage, or taking a shower. Come to find out, there is something to this mindlessness, and Einstein and Jobs both thrived on it. They scheduled “No time” into their days to boost their creativity. According to Steve Kotler, author of the book The Art of the Impossible and TED speaker, “No time” has to do with a quiet moment a person can isolate him or herself from the noise and demands of the world. When they scheduled “No time”, nothing or no-one was allowed to disrupt or interfere. Neuroscience has shown that “No time,” or disconnection blocks of time, have a profound positive effect on creativity and innovation. Basically, it gives you the necessary time for your mind to wander to places and ideas that stay hidden among distractions.

Even though I work in an industry where creativity is a must, I don’t schedule “No time” for myself. In fact, with the onslaught of technology, I fill my shower time with books-on-tape and my beach walks with high energy workout music. I even fall asleep at night listening to ten minutes of my Audible book. I have stolen the little “No-time” I didn’t even know I had.

So this all has to change for me immediately. I need “No-time,” and I need it now! What about you? I have an idea—Let’s start on July 4th, Independence Day, by honoring the day with independent thought. Wake up an hour before everyone else, find your spot, pour your coffee and get lost in silence. This is a special day that changed the trajectory of America and its citizens forever, so take some time on this day to do the same for yourself. You won’t regret it—Red, white and blue, make the first hour about YOU! God Bless America, and please pray for our country.