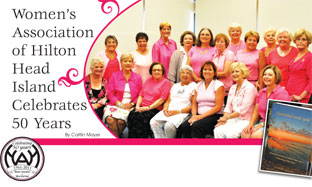 Take a minute to think about your last birthday or anniversary celebration. Whether it was a big blow-out or a small dinner with family, my guess is there were gifts involved, and whether you want to admit it or not, I bet those gifts made you feel loved and appreciated.

On May 4, the Women's Association of Hilton Head Island (WAHHI), the area's largest non-profit women's organization, will celebrate their 50th Anniversary. Rather than being showered with gifts, they are doing what they do best: giving back to the community they love and appreciate in a big way -- with a $15,000 donation to the Coastal Discovery Museum at Honey Horn.

The organization is excited about their gift to the community for two very important reasons that reach to the heart of everything they stand for. The first is because the whole community has access to Honey Horn, which promotes the core mission of the devoted women's group: to promote the natural and cultural beauty of the Island, encourage projects that benefit the community and facilitate communication among women in the area. The second reason for their joy is that their gift recognizes the organization's roots, as well as their first president, Billie Hack, whose family owned the museum property.

Some of you long-time Islanders may remember the Association under a different name: The Hilton Head Island Garden Club. The organization was originally started under this title in 1961, but was changed to WAHHI in 1965. During this time the organization also formed the first special interest groups, which are specialized groups developed to encourage the special talents and passions of its members. These groups range in topics from the arts, to games, to history and culture. Some of these specialized groups have even morphed into larger, more substantial parts of the society. For example, have you heard of "The Island Packet"? This well-known publication developed from a WAHHI interest group called the Reporter's Group, which became "Island Bulletins" and finally "Island Packet" in 1970. Throughout the years, WAHHI has had more than 50 interest groups at one time. They currently offer more than 30.

Another long-running program that has become fundamental to WAHHI is the annual Youth Community Service Awards, which encourages area youths to take on projects that benefit the community. Since 1980 the organization has given over 100 monetary awards to outstanding young people from both public and private schools who have served the community in an important way. Last year alone, the organization gave $3,000 in awards to four deserving high school seniors.

Besides the monetary contributions WAHHI has made to improve the youth of our beloved island, they have also donated supplies, time, and of course, an extra heaping of loving care to help promote the natural and cultural beauty of the area. If you have taken a walk around some of the Island's most popular locations, you have most likely seen some of the WAHHI's gifts at work. Some of their most noteworthy projects include: the donation of bricks for the sidewalk of the Arts Center of Coastal Carolina, a bench that holds a Walter Palmer pelican statue at Shelter Cove Park and funds to construct the study room at the Hilton Head Branch of the Beaufort County Public Library.

To commemorate their 50th anniversary and generous gift to the Coastal Discovery Museum, a plaque bearing the organization's name will be placed on the front porch of the Gabled Farm House on the museum's property. As if one gift to the community wasn't enough, WAHHI has also published a 50th Anniversary cook book, titled Garnished With Gold, featuring nearly 500 treasured recipes contributed by WAHHI members and local restaurants. The book also includes a history of the group, written by past president Jackie Cordray and beautiful Lowcountry photography by Ed Funk. This book is available to the public at the cost of $20. It will be on sale at the May Pink Partini at Reilley's-North.

After 50 years, this fabulous organization is more than 500 members strong and continues to make a difference year after year to the people and environment of the community they live in. The women who join WAHHI develop lasting friendships, share mutual interests with others and develop new passions for their involvement in the community. To the ladies of WAHHI: thank you for your dedication and support in preserving and further beautifying this Island that so many of us call home. You are truly an inspiration to us all. Congratulations on all your successes throughout the Island and in the hearts of many of the individuals you've touched with your generosity, and happy 50th anniversary!