On March 3, 2008 prominent Hilton Head Island couple John and Elizabeth Calvert vanished without a trace. Were they murdered? Are they alive in a witness protection program? What about the supposed “suicide” of Dennis Gerwig, who was named a person of interest after the Calvert’s disappearance? Gerwig was a trusted advisor to the Calverts.

On the tenth anniversary of John and Elizabeth’s disappearance, a book, Deceit, Disappearance and Death on Hilton Head Island by Charlie Ryan and Pamela Martin Ovens was released. It is a well written account of the events that occurred during that March more than ten years ago.  Though the authors were able to scour through more than 650 pages of additional information on the case, questions still remain: WHY did the Calverts disappear? WHERE are they? If they are dead, WHO killed them? WHAT is the truth?

I had an opportunity to have a thought-provoking conversation with co-author Pamela Ovens in hopes to gain deeper insight to this notorious unsolved mystery:
Donne Paine 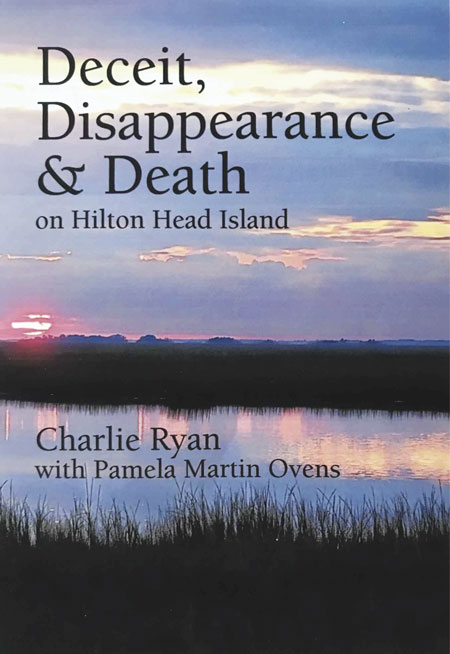 PINK: I am so happy to finally meet you and discuss the events of this infamous Hilton Head cold case. I guess the first question is what inspired you to tackle this event and write the book?

Pamela Martin Ovens:  I have been a Hilton Head resident for many years, and I knew all the key players.

PINK: When the Calvert’s come into conversation, there are many differing opinions regarding Dennis Gerwig, the Calvert’s accountant. He was the main person of interest in the case. As such, do you believe he was murdered, or did he commit suicide?

PINK: Why do you think it was suicide?

Ovens: I think he was trying to protect his reputation. Once the evidence of his embezzlement of the Calvert’s money came out, he would have been humiliated, and perhaps he felt this was his only way out.

PINK: Was it that much money? I heard It was a few hundred thousand dollars. In Hilton Head, I would think that is pocket change.

Ovens: I think it was more like 4.5 million and probably more than that.

PINK: Do you think the Calverts could be alive?
Perhaps in a witness protection program?

Ovens: No I don’t. I think Gerwig got involved with the wrong people, perhaps using some of the Calvert’s money for his own endeavors. Maybe money laundering. When Elizabeth Calvert approached him noticing irregular bookkeeping practices, he panicked and perhaps he hired someone to kill them. Once they were gone, Gerwig may have been filled with remorse and killed himself.

PINK: If your theory is true, why do you think he didn't confess in his note?

Ovens: He was filled with Benadryl; large amounts of Benadryl were found in his body during an autopsy.

PINK: He died from knife wounds, correct? If he had that much Benadryl could he have had the strength to cut himself?

PINK: About the Calverts, how do you think they were killed?

Ovens: Since there are no bodies nor any DNA evidence, I am only speculating: The Calverts were last seen going to a meeting at Gerwig’s office at Sea Pines Center. Maybe the hired killers were waiting at Gerwig’s office. They succumbed them somehow, maybe with an injection, wrapped them in tarps and after hours transported them to some dumping spot in the water.

PINK: Interesting opinion. If there is one thing you wish to know regarding this case, what would it be?

Ovens: I would like to know the truth. I am hoping eventually someone out there will come forward; there has to be more to the story.

PINK: Thank you so much. You have written two books. Do you have any upcoming projects you’d like to share?

Ovens: Yes, I’m working on a children’s book that has an influence from Shakespeare.
If you are curious or want to delve into inside investigation details about Hilton Head’s largest crime mystery, you must read the intriguing Deceit, Disappearance and Death on Hilton Head Island by Charlie Ryan and Pamela Martin Ovens. What do you think happened that night in early March 2008 when John and Elizabeth Calvert vanished without a trace? Perhaps one day this macabre mystery will be solved.