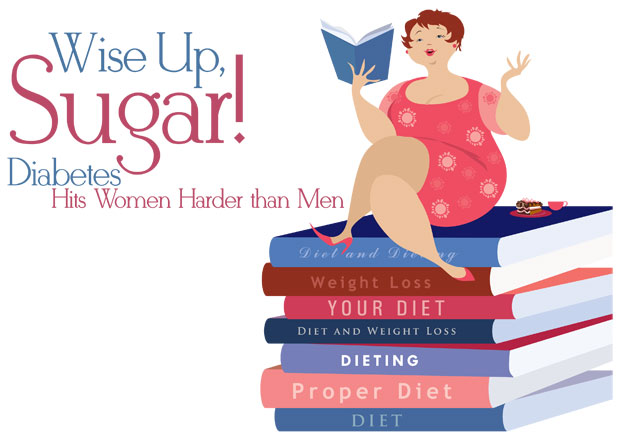 When it comes to the general population, women tend to live longer than men. But when it comes to women with diabetes, women seem to lose this advantage. The risk of heart disease, the most common complication of diabetes, is more serious among women. According to Marrianne Legato MD, FACP, Director of the Partnership for Gender-Specific Medicine at Columbia University, the risk for heart disease is six times higher for women with diabetes than those without. While men with diabetes also have an increased risk of heart disease, it is estimated to be only two to four times that of men without.

Women with diabetes who experience a heart attack have lower survival rates and a poorer quality of life than men. Some studies have shown the association between diabetes and death by heart failure to be stronger for women than for men. It has been suggested that the increased risk may be in part related to the fact that women are less likely to recognize their symptoms as a heart attack. Most people would recognize "chest pain" as a sign of a heart attack. However, women, especially those with diabetes, may only experience symptoms such as nausea, back or jaw pain, and shortness of breath during a heart attack. Early treatment can limit heart damage and save lives, but before a woman will seek help she has to recognize her symptoms.

Women experience depression about twice as often as men. The rate of depression in people with diabetes is much higher than in the general population. The link between diabetes and depression in women appears to run both ways. In a large prospective study published in the Archives of Internal Medicine, the risk of incident diabetes was increased in women with depressed mood. Conversely, having diabetes increased the risk of depression over a decade of follow-up, and the risk rose with the severity of the disease. Other research has shown that women with diabetes and depression are at a greater risk of premature death.

Many hormonal factors may contribute to the increased rate of depression in women-particularly such factors as menstrual cycle changes, infertility, pregnancy, miscarriage, postpartum period, pre-menopause, and menopause. Many women also face additional stress due to responsibilities both at work and home, single parenthood, and caring for children or aging parents.

In addition to biological factors, sociological factors may also influence women's health and contribute to the toll diabetes can take on a woman's body. For example, economic barriers sometimes block quality health care for women with diabetes. Poverty is a major concern for women of childbearing age who have diabetes. Also, women may put their own health last on their list of priorities.

While this information may get your attention, many Americans still don't recognize diabetes as a serious matter. It is proven that there are important lifestyle choices that women and men can make to lower the risk of developing type 2 diabetes. It is also known that controlling factors such as blood pressure, cholesterol, and blood sugar can dramatically lower the risk of diabetic complications. With 12.6 million (10.8%) of all women aged 20-years or older having diabetes, nearly 26 million children and adults in America living with diabetes, and another 79 million at high risk for developing type 2 diabetes, it is critical to take it seriously. Recent estimates by the Center for Disease Control predict that if trends do not change as many as one in three Americans will have diabetes in 2050.

In recognition of the American Diabetes MonthÆ 2011, both Hilton Head Hospital and Coastal Carolina Hospital are encouraging people with diabetes to take charge of their health. Each hospital will be hosting "Diabetes University", a free, half-day community education program on Saturday, November 12, 2011. The Hilton Head Diabetes University will take place at First Presbyterian Church from 8:15 to noon. This program is open to all people affected by diabetes or for anyone who would like to know more about diabetes. Area physicians, hospital staff and other health care professionals will present topics related to understanding and controlling diabetes.

Diabetes is among the top ten leading causes of death in both Beaufort and Jasper counties. Our goal is make sure residents have access to information that will help them lead healthier lives.

?Are You at Risk for Diabetes?
You have an estimated one in 600,000 chance of being struck by lightning, a one in eight chance of developing breast cancer if you are a woman, and, for people born in the year 2000, a one in three chance of being diagnosed with diabetes. Does that mean any of these three things will definitely happen to you? No. These risk estimates are referring to the probability that something may occur, not guaranteeing that it will.

Risk estimates for diseases such as diabetes are developed by studying large groups of people and evaluating categories and characteristics that may be associated with increased or decreased risk. While there are seven significant risk factors for developing diabetes, it is important to keep in mind that even if you have similar risk factors as another person, you can have very different disease experiences.

Obesity
Being overweight or obese (having a body mass index higher than 25) increases your risk for diabetes. This is the primary risk factor for type 2 diabetes.

Family History
If you have a parent or sibling who has been diagnosed with type 2 diabetes, you run a higher risk of developing the condition.

Increasing Age
Scientists believe that as the pancreas ages, it doesn't pump insulin as efficiently. People over the age of 45 should be tested for type 2 diabetes every three years if results are normal and if they have no other risk factors for the disease. If results are borderline, or there are other risk factors, the test should be repeated more frequently.

Genetics
African-Americans, Hispanics, Native Americans, Pacific Islanders, Alaskan Natives, American Indians and Asians are more likely to develop type 2 diabetes. However, a genetic disposition doesn't guarantee someone will or will not get diabetes. Lifestyle choices are an important part in determining who gets diabetes.

High Blood Cholesterol and High Blood Pressure
The risk of developing diabetes increases if your HDL (good) cholesterol level is under 35 mg/dL or your triglyceride level is over 250 mg/dL. High blood pressure of 140/90 mmHg or higher also increases diabetes risk. These two risk factors are often linked to obesity, a high fat diet, and lack of exercise, all of which can also lead to type 2 diabetes.

You can have all seven risk factors for diabetes and never develop the condition. Or you could have just one and be diagnosed with the disease. Researchers are not sure exactly why some people develop diabetes, while others do not. And even though there is no cure for the disease, you can lower your risk by exercising regularly, eating a healthy diet, losing weight, and lowering blood pressure and cholesterol levels.

Talk with your doctor if you are concerned about your risk of developing diabetes or if you notice any symptoms of type 2 diabetes such as increased thirst, frequent urination, fatigue, weight loss, blurred vision, or slow-healing sores.

For more information about diabetes, talk with your doctor or visit the National Diabetes Information Clearinghouse Web site at www.diabetes.niddk.nih.gov.

Sign up to attend these informative sessions offered in two locations:

For more information or to register for Diabetes University, call 877-582-2737.  Select "1" for Coastal Carolina Hospital or "2" for Hilton Head Hospital.  Register by Monday, November 7th.

Elizabeth Huggins MESS, RD, LD, CDE is the Outpatient Diabetes Education Coordinator at Hilton Head Hospital. She is a registered Dietitian, a Certified Diabetes Educator, and a certified insulin pump trainer for Medtronic. She has more than 20 years of experience in helping people to improve their health through lifestyle modification involving nutrition and fitness. She can be reached at (843) 682-7348.