It Will Light Up Your Life 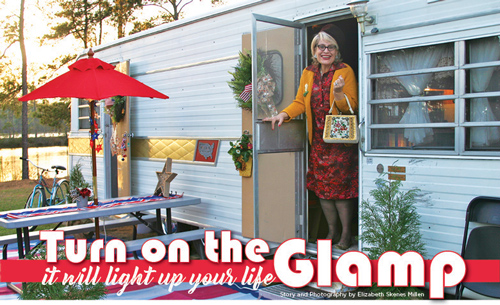 Get outside and glamp! That’s not a typo; glamping is a recent trend where women have taken over campgrounds all over America in their glammed-out, adorable campers all for the sake of a little R&R with their girlfriends. Glamping is taking “girls’ weekends” to a whole new level of fun—and connection. They are called Sisters on the Fly, a national group of more than 8,000 women, who take camping, sisterhood and adventure serious. Well, not that serious. These camping trips are all about fun! The “sisters” are able to escape their daily grind by getting out in nature and celebrating life and friendship together through the simplicities of camping, bon fires, story telling and cookouts.

Jennifer Megliore, owner of Art Ware Designs and experienced glamper, invited me to join her and other local Lowcountry glampers at Camp Lake Jasper, a beautiful camping resort right off Highway 278 before you get to I-95 (camplakejasper.com). I arrived on Thursday afternoon and was met by Peggy Randall, Sun City resident and glamper extraordinaire. She showed me around the campground, pointing out each camper in their group. They were like life-sized dollhouses, and what woman doesn’t want that? Some ladies have tiny campers called T@Bs, while others have well over 20-foot long, rolling penthouses. None of them are the same, but what they all have in common, is each on is a reflection of the lady of the house.

In case you haven’t noticed yet, I have not mentioned one single man. That’s because men are usually not invited, and absolutely not allowed if it is an “official” Sisters on the Fly event.  What that means is these women have trailered, hauled, driven, parked (which can include backing up) and set up their own camp. All of them remarked on how empowering this is—knowing you can do something like that on your own.

“Women take care of everybody. Here, you’re just taking care of yourself,” Peggy explained. “We like to say we make girls out of women,” she added. We stopped by a 35-or-so-year-old Holiday Rambler owned by Hilton Head resident Christine DeLong, who is new to glamping. She found her “old gal” on Craig’s list, bought it solely through texting, sold her car for a tow vehicle and headed to Des Moines, Iowa, to claim her baby.

“It just sat in a field with the lights on every night. It was missing a hubcap, had a cowgirl motif and was very tired,” Christine said. She has revamped it all in motif and memory of her grandmother because she had such a fun time camping with her grandparents as a child. “I have to keep this old girl rolling. She loves to roll,” she smiled, adding, “I’m having the time of my life!”

She invited me to come back because she was going to change into a vintage outfit reminiscent of her grandmother. When I returned, she took us back to the ‘50s and we all admired her style and had a huge laugh right there in the middle of the day, which is what glamping is all about!

We continued to make our rounds, visiting with women as they set up camp for the weekend. In the distance I saw a glamper with dragons painted on the outside and knew I was in for something different than Christine’s grandmother. Vicki Itana Brown from Atlanta, Georgia, met us at the door. She is a dragon lover, a belly-dance enthusiast and a free spirit. When I entered her “weekend home,” I felt as though I had stepped into Morocco. It was exotic and rich with color. Every little trinket and wall hanging had a memory. It was a reflection of her, actually a spitting image. Before we moved on, I had to open my big mouth and say, “I don’t understand how belly-dancers moved their butts so amazingly, without moving from the waist up.” Hence the commencement of a belly dance lesson on how to shake it but not break it! And, guess who really has the moves: Jennifer Megliore!

My final glamper tour before the dinner gathering was at Mrs. Rebecca Amerson’s glamper, which was a sight to behold. First, I call her Mrs. Amerson because she is a retired high school librarian. Second, her camper is what legends are made of. I kept getting asked, “Have you seen the bookmobile, Have you seen the bookmobile?” I have now seen the bookmobile and it is nothing short of amazing. Mrs. Amerson hired a muralist to paint the outside of her camper and she gave him very specific, do-what-you-want instructions. The masterpiece wraps all four sides and every part of it has meaning. She gave the artist 50 book titles to include, along with a picture of her son when he was young and of her grandparents. She also brought him trinkets and asked if they could be included. The creativity and thought behind this camper is extraordinarily special. I’m just glad I got to hear the whole story and see it in person.

The stories could go on and on about this tribe of women, who have hitched up and become best buds through the fun and excitement of glamping. It’s the appreciable spirit of building each other up that have made these “sisters” click. And, they are always looking for more to join in. They welcomed me with open arms. The motto of Sisters on the Fly is “We have more fun than anyone!” Indeed, they do.