Not What You Expect

Last year, Dennis Lauzon of Hilton Head Island was one of those men. He was hanging out at the pool with his family when one of his daughters noticed a lump on his chest. “That looks funny, Dad,” she said. Dennis said he’d had that lump since he was a teenager, nearly 60 years. As a kid he had it checked out, and back then doctors reassured him there was nothing to worry about at his age, and it was probably a swollen gland of some sort, and that had been the end of it. It wasn’t only Dennis’ daughter who expressed concern. His son, a surgeon, who was also at the pool that day, took a closer look and encouraged him to have it checked out.

As Dennis relays the story to me, his wife Anne Marie interjects, what is in her mind, a key factor in the series of events. A close friend of theirs, Steve, flew in from Texas for their daughter’s wedding. Steve had been diagnosed with breast cancer and was undergoing treatments. His visit and the conversations that ensued coincided with the family discussion at the pool that day, prompting Dennis to see a doctor sooner rather than later. 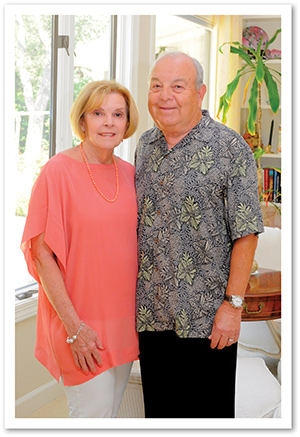 He explained to the doctor he’d had this lump for 60 years, and it had never changed. The doctor felt certain it was probably nothing to worry about, but ordered a mammogram, followed by a biopsy just in case. The biopsy confirmed it was breast cancer. “I guess the lump turned into cancer. Who knows what happens to cells in time. I’m 74 years old,” Dennis said.

Dennis had a mastectomy on Monday, October 3, 2016, and two days later evacuated because of Hurricane Matthew. Dennis and Anne Marie went to Sumter, S.C. to stay with their son. There, Dennis was able to receive daily post-op care from his son, a surgeon who has performed breast cancer operations.

A closer look at the removed cells revealed Dennis had an aggressive type of cancer. So, the doctor recommended he undergo four rounds of chemotherapy. According to both Dennis and Anne Marie, that was the hard part. Each round took him nearly a week to recover from. Each taking a toll on his body, wiping out his immune system, leaving him hospitalized with an infected port and shortly after, an infected nail bed that swelled up with a giant blood blister, looking more like a plum than a thumb. Of all the things Dennis had endured, this one was the most painful. “A 12 out of 10 on the pain scale.” He showed me how the chemo had affected all his fingernails, which are still growing out.

I asked Dennis if there was a history of breast cancer in the family. Interestingly, no one on Dennis’ side has ever had cancer. Even so, the family is no stranger to hearing such news and tackling cancer at the line of scrimmage. One of their daughters was diagnosed with a brain tumor as a teenager. Their granddaughter had Leukemia, and after she finished her treatments, her mother (one of their other daughters) was diagnosed with both thyroid and uterine cancer. So far, the Lauzons are kicking cancer’s butt, with a winning record of 5-0.

Anne Marie credits both their faith and their positive, take-care-of-business attitude for their success. “So many people are afraid of the word ‘cancer.’ After receiving the news, we just say ‘Ok, what do we need to do? Let’s get on this!’ Attitude has a lot to do with healing.” Anne Marie went on to say, “We are prayerful, faith-filled people.” The Lauzons invited and welcomed prayers from anyone who offered. “The power of prayer is overwhelming.” It certainly seemed someone was looking over Dennis that day at the pool as his kids insisted he have a lump that he’d had for 60 years checked out, and just as it had begun to metastasize. Some might say it was fortuitous, but it seems like a divine intervention to me.

For now, Dennis has moved on to the five-year plan. This involves a yearly mammogram of his other breast for the rest of his life, as well as PET scans to make sure the cancer doesn’t show up somewhere else for a rematch.

Before I left, I asked the Lauzons what advice they would give to others. Dennis said, given the rarity of breast cancer in men, it’s not like men need to run out and get mammograms, but they should be aware of changes in their bodies and have anything suspicious checked out immediately. Anne Marie added that even though mammograms for men seem unnecessary, “You can always check your chest.” She also said sometimes wives may need to be the ones to encourage their husbands to be proactive when it comes to seeing a doctor.

We are thankful to the Lauzons for sharing their story with Pink Magazine. We hope it brings about awareness, while empowering you to take control over the future of your health.