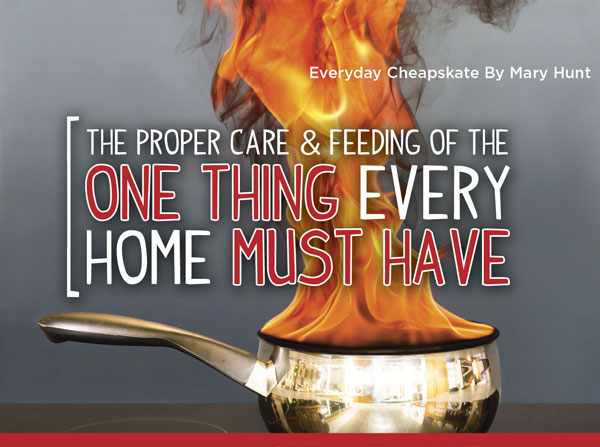 My heart was pounding, and the smoke alarm was screaming, and I was in full-on panic mode. Flames were reaching toward the adjacent wood cabinets. It happened so fast! I didn’t have time to run to the pantry to search for baking soda.

I had a rip-roaring fire on my hands, and I was in slow motion thinking about how sad it would be to be homeless for Christmas.

I’d turned my back for a few seconds to find a utensil. When I returned, small flames were shooting from the burner. My quick thinking told me to smother the grease fire, so I grabbed a pot lid to do that. But the lid wasn’t airtight, and soon the flames were double the size—and spreading.
That’s when I locked eyeballs with the fire extinguisher that had been sitting on the counter for so long it blended into the decor.

I’d never engaged a fire extinguisher before. I had read the instructions once, but that’s about it. Not knowing what to expect, I grabbed that thing, jerked out the red plastic ring (it came out easily), pointed the nozzle and pulled the trigger. It put out the fire with one mighty blast of fine yellow powder so strong and powerful it nearly knocked me off my feet.

SHOCKING STATS: My experience not only woke me up but also sent me into research mode. What I learned is sobering, if not shocking: Each year, fire kills more Americans than all other natural disasters combined. Eighty percent of all fire deaths occur in residences. Where do those residential fires start? In the kitchen!

FIRST, CALL 911: As grateful as I am, I did not do everything by the book. A fire extinguisher is no substitute for the fire department. One-third of all people injured by fire are hurt while trying to control it. Fire safety professionals tell us to call 911 first. Then, use the extinguisher.

Be sure that you can get out fast and that the fire is small and not spreading. Grab that thing. Stand back 6 feet. And engage!

P - Pull the Pin: By pulling the pin, the operating lever should unlock and allow you to discharge the extinguisher.

A - Aim Low: Point the extinguisher hose or nozzle at the base of the fire.

S - Squeeze the Lever: This should discharge the extinguishing agent. Some extinguishers may have a button or other means of activation. Know your extinguisher!

S - Sweep from Side to Side: While you are aiming at the base of the fire, you should sweep back and forth until the fire is extinguished. If the fire reignites, repeat the process.
If the fire does not go out quickly, close the door to the room; get everyone out of the house; and exit the premises promptly. Meet the fire department in front, and direct them to the location of the fire.

LIFESPAN: Fire extinguishers do not have infinite lifespans. They expire. The typical portable extinguisher that has not been opened remains in good condition for five to 15 years.
But you don’t have to guess or wonder whether it’s fully charged and ready to go. Keep your eye on expirations dates and/or gauge readings. The last thing you want in the face of a fire is an extinguisher that won’t respond!

Look for the pressure gauge on the extinguisher itself. Make sure the needle on the gauge is in the green zone. That indicates that it is still good. Once that needle moves into the red zone, it should be replaced or recharged. (Small extinguishers for home use are often single-use products and cannot be recharged. Read the labels.)

GET IT RECHARGED: Many traditional extinguishers are rechargeable. This process should not take longer than 10 to 20 minutes and can commonly be done at local fire stations or through private service companies.

Keep in mind that it may be more cost-efficient to purchase a new extinguisher if the one you have is for household usage. By the time the recharge has been done, the new one could be purchased for the same price, if not cheaper.

Mary invites questions, comments and tips at EverydayCheapskate.com, “Ask Mary a Question.” This column will answer questions of general interest, but letters cannot be answered individually. Mary Hunt is the founder of Debt-Proof Living, a personal finance member website and the author of the book Debt-Proof Living, Revell 2014. (C) 2019 CREATORS.COM