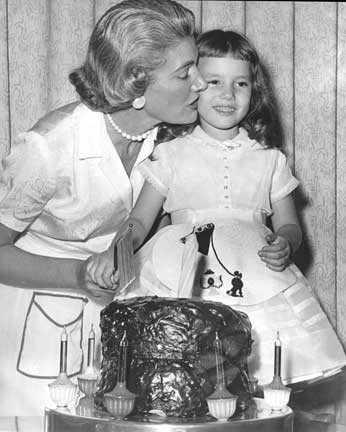 Fifty-six years ago on St. Patrick's Day I went to the doctor and learned that I was to become a mother. It was an answer to a much prayed for longing. Our child would be born around the end of March. The reason for the short gestation period was because this beloved child was not conceived in my womb, but in my heart. God meant for me to be an adoptive mother.

My first concern was for the woman who had decided to give up the baby. I told the doctor that if she changes her mind, I would still be responsible for the charges and would be very happy for her. He assured me that she was from out-of-town, and wanted nothing more than to have help keeping this a secret so she could go back to her life as though it had never happened.

As the end of the month neared, my husband and I were filled with anticipation. By March 31 we felt something like mental labor pains. My husband interrupted a class I was teaching, which he would never do unless it was extremely important, to tell me the doctor had called and said, "We better get down to the hospital right away. We are going to have a baby before the night is over!"

At ten minutes to twelve the nurse put the newborn child in my arms and said, "You have a beautiful daughter." We named her Pamela and painted a sign over the door to her charming new room addition that my husband had built. It read "Pamelaville." 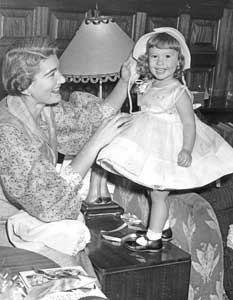 Pamela was scheduled to be released from the hospital five days after her birth, which would have been the Monday after Easter. Upon my request, the doctor agreed to allow us to bring her home the morning of Easter Sunday. He said this child made everyone happy. She unburdened the girl who bore her. He used the funds we paid for her prenatal care and delivery to go on his honeymoon, and we happily welcomed her to a stable and caring home.

We lived a sophisticated adult-oriented life with many divergent interesting friends and tenants in the building. They were all a part of Pamela's life. I always felt that Pamela belonged to the world. I was privileged to be responsible for her care and upbringing, but somehow she kind of belonged to everybody.

She was given an immense amount of freedom and was very secure and outgoing even at a young age. She would wander through the halls of the studio apartments of the artists and tenants. They all welcomed her and took an interest in her. One day she took her crayons and coloring book and asked, "Papa Gross, would you artist for me?" He was one of the most famous artists in the country and there he was with her on his lap coloring with her crayons.

She went everywhere with me: work, golf, travel, family vacations, lunches and not just as a bystander. She was involved in all of my work from teaching classes to modeling to working conventions. During a trip to Cuba, we were at one of the finest supper clubs. Pamela was dressed real pretty and we gave her a quarter to tip the attendant on her way out of the ladies room. On her way back she had made friends with a diner that she thought looked like Santa Claus and was detained sitting on his lap and talking. The hostess came over and asked if little Pamela could stay with him for a little while because Ernest Hemingway, who was one of their best customers, was enjoying her company.

She was so special. Unspoiled, uncomplaining, and prematurely responsible, she tried hard at everything she did. Year after year when I would go to her teacher conferences, they would all tell me the same thing, "Pamela does well, but she doesn't do herself justice. She is always concerned about somebody else." After a while, I began to respond, "That's not so bad. There should be more people that way." That still is the most wonderful thing about her. She is the most selfless person I have ever known.

My mother always thought I was the bee's knees, and I kiddingly say she gave me a wonderful false sense of security. This is the same thing I passed on to Pamela. She married, had two children 11 months apart and is now passing it along to her grandson too. She takes him everywhere in her work and gives him the love and confidence of which she has so much.
Pamela brings so much love and joy to my life. When she was small, I will never forget when I did something spontaneously to help her she said, "Good I got you. If it weren't for you, I might have been an orphan." I emotionally answered, "Good I got you too, Honey. If it hadn't been for you, I might never have known the joy of being a mother."