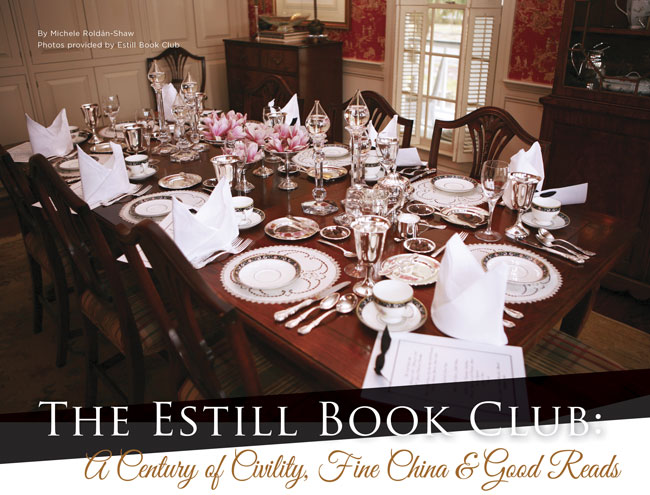 The Estill Book Club, a hallowed institution founded by twelve women in 1913, has yet to interrupt its activities despite wars, depressions, and the Internet Age. Membership is not something you pick up and put down like a second-hand beach novel. It’s sacred, time-honored. You don’t choose to join the Estill Book Club; you either get invited, or the membership is simply handed down matrilineally. There are only twelve spots in the club, and new ones don’t come open often. The only membership requirements are that you live in Estill, and you love to read. In 105 years the club has never once missed its monthly meeting.

Having held official status since 1962 (though she passed dinner rolls at her momma’s Book Club meetings long before that) Lawton is the club’s oldest living member. “You don’t miss Book Club if you can help it,” she says. “And you don’t plan to do anything after Book Club. Nobody makes doctor’s appointments on the second Wednesday. Everybody goes in their calendars and writes Book Club. All year long you’re thinking, ‘What book am I going to select? What am I going to serve? Then you break out your crystal and your china and your fresh cut flowers and linens, and you have a lovely meal when the meeting’s over. It’s just a gem.”

From its very structure, this is no ordinary read-of-the-month club. Rather than convening to discuss the latest in a pre-selected list that comes down to them, all twelve members pick a book they know and love to announce at the first meeting of the year. Then, in alphabetical order, they pass their personal copy to the next member. Member B reads Member A’s book and makes her report at the next meeting, even though most of the others haven’t read it yet. Meanwhile Member B’s selection is read and reported on by Member C. It won’t be until the last month of their calendar year (which starts in September) that all twelve members have read all twelve books and can openly discuss without spoilers.

“You’ve got twelve times to go over that book,” says Lawton, whose choice this year was Moloka’i, about a little girl in a Hawaiian leper colony, and who’s currently reading The Bishop’s Pawn, a historical thriller about Martin Luther King. “It gets to be a friend.”

Each of the twelve ladies chooses a month to host Book Club at her home. Talk during the meeting doesn’t stray—members tell what they liked or disliked about the book, maybe that it opened their eyes or provided a great escape. People speak their minds freely, but it never descends into contentiousness or ruffled feathers. In addition to giving an opinion on the book, their report includes reading out a particular passage that struck them, which they have underlined in the physical copy belonging to who selected that title. Lawton still has every single one of her Book Club books and loves going through the marked quotes. Members also share a news item—a community fundraiser, a current event, an article, whatever they wish to announce, and Pink Magazine is a frequent showpiece; Lawton declares she must have passed out 50 copies of Publisher Elizabeth Millen’s editorial about thankfulness last year. Proceedings are duly noted, and the club’s records date back to the original member and book lists, as well as minutes from all the meetings, the earliest of which are in an old-timey ledger book, now held by USC’s South Caroliniana Library.

“We know who said what, who’s house they met in, what they served, their opinions on the books, that it was so hot the ice cream melted,” says Lawton. “Delightful minutes! My cousin Sarah Lawton said that during World War II, when everything was rationed, they used to go to Bluffton and catch shrimp and crab, and that’s what was served at Book Club. Everything was about Book Club. Ms. Lucille Rhodes used to make peach pickles: You take a whole peach and stick a clove in it, and then you make a syrup to pour over it. They’re very difficult to make. Somebody would say to Ms. Lucille, ‘Gosh how I’d love a peach pickle!’ and she’d say, ‘Oh no, those are only for Book Club.’”

Estill is a forgotten railroad town, over an hour on country roads from anywhere, in an underserved part of the state. In 1913 the population was less than 1,500, and today it’s scarcely more than 2,000. One surmises the Book Club has exerted a worldly and broadening influence on all the minds associated with it. Outsiders are fascinated by the group’s quirky longevity and old-world sensibilities. With little else for Estill to claim besides Civil War history and the restored Bull Durham Tobacco mural, The Estill Book Club has been lauded by the press, including the Charleston Post and Courier who sent a reporter out for the Club’s 100th anniversary.

“He (the reporter) said he only needed to come once, but he ended up coming four times,” recalls Lawton. “He wanted to keep coming but they told him he had to quit. He was the first man ever to attend, and he was engrossed from the minute we started talking. It made the front page of the Sunday edition.”

The charm of The Estill Book Club has a lot to do with small town Southern history, nostalgia, and the languid pace of bygone days when life centered around the kitchen table. It has to do with old-fashioned manners and recipes, and husbands proudly laying down fresh straw in the yard before meetings. It’s about social graces that come naturally rather than being forced. Nobody minds their P’s and Q’s at meetings; civility is just second nature. And the next generation seems poised to claim this heritage despite a world around them in which “kids are fed chicken fingers in the back seat of a car with their faces in cell phones,” as Lawton ruefully puts it. For better or worse, Estill is a land development forgot. But for twelve ladies, it’s heart, home, and Book Club.

“I used to work in public schools in Bluffton and Hilton Head,” said current president Lois Harper, who’s quick to point out that her office and that of secretary simply rotate every year through all twelve members. “People would tell me they left their homes, families, and jobs to move to Bluffton, and I’d say ‘Well I left my Book Club—that’s so much worse!’”

Thankfully, Lois is back. For her, Lawton, and this wonderful cast of intergenerational readers, the last page on their beloved Book Club has yet to turn.