HomeFeaturesInstilling the Value of a Dollar in Your Kids: Part II

A Journey of Hope and Miracles 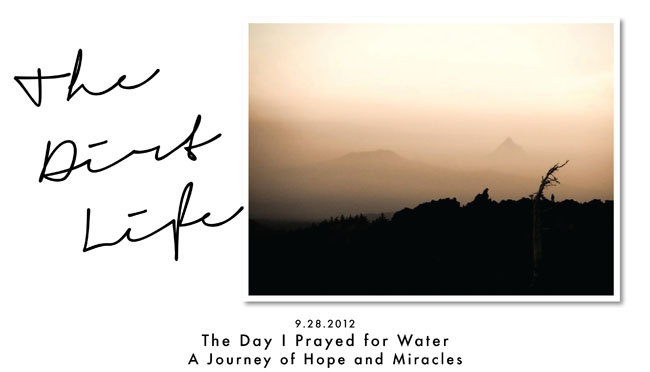 This is a story that’s hard to share, but only because it means so much to me. And I want to preserve it’s memory with the meticulousness of mummifying a great Egyptian Prince. Sometimes, in sharing, I feel like I lose my sense of ownership-like someone might take or change my memory. But this story is meant for here. God was meant for such glory.
A year ago today, my husband and I finished hiking the Pacific Crest Trail (PCT). It took us five months to the day, and I felt every mile, all 2,655 of them, in each and every foot bone, in the stretch of my calf muscles and in the depths of all that I am. Many have heard me mention my journey a time or two; heard me say that the God I met in the woods changed my faith forever. Some people have even asked me, “How?”

This is an incredible anniversary.

It was another hot day along the windy and ruthless trail that lie west in California. I had expected the heat, we were in the desert after all, but I didn’t expect my water supply to deplete so quickly. I was knocking myself for purchasing a Camelback, a hiker-friendly water carrier that came with a tube that could be strung through the shoulder strap on my pack for slurping. I had originally bought it so that I could have access to my water with the simple squeeze of the tube-straw style. The down side to such convenience was blindness when monitoring water levels. The bag that held all the precious liquid was buried deep within my pack, and I was only aware that it was no more once I heard the deafening dry slurp of the last droplets of water as they left my tube and puddled on my tongue. No big deal, I thought, I’ll fill it up with the remaining water I’m carrying in my spare Powerade bottles.

I walked a mile more, ignoring the thirst and rising temperatures, knowing that it was just another day along the Pacific Crest, where I blink the sweat out of my eyes and lick my hot teeth. Soon, I could bear no longer the feeling of each and every taste bud shouting for water. I set my pack down as my husband and a fellow hiker went ahead. I looked in my side pocket on the outside corner of my pack. The familiar black lid sealing the stained and browned plastic bottle was a symbol of comfort and life, and I barely contemplated it on most days. But as I yanked on it, I felt the depressing lightness of the bottle, and knew it was empty. There were two other known empty bottles strapped on the front of my pack that I only filled when I knew that we’d go very long stretches, 30 miles or so, without hitting water, so I didn’t even pay them mind. Instead, I turned towards the other side of my pack, sewn with a matching pocket, where I kept a near identical bottle to the first. It, too, came up empty.

I must have blinked 500 times in a row, holding my barren bottle, knowing that I had decided against refilling at a small stream miles ago. I had an overwhelming desire to literally dislocate my hip and kick myself. I reached for my data book, one of many paper guides used along the PCT to find my way, know visual markers, expect roads and dirt roads, plan town stops, and, ever so important and pressing in that moment, expect the next water source. A small, unreliable spring was sighted as “trickling” by the kind soul who scoped out those known sources and documented our 2011 water report. It was a mere two miles from where I stood. I can handle that, I thought. So, I hoisted my pack for the, what seemed, one thousandth time onto my shoulders. And the weight that usually caused a crinkle in my brow and a shooting pain in my back felt weightless, as I nearly raced to fill my bottles.

The path bended endlessly. The boys were far enough ahead that I could hear every faint sound among the trees. With that, my mind began tricking me—it took power over the silence of the void. And the smallest turn of leaf sounded like the word I read in black and white: Trickling. It was burned in my brain. I will fill each and every bottle this time, I thought, I will sit hunched and strained to brim my containers, even if I must cry to get through it.

But the path bended endlessly.

I began wondering if I was in a time warp. Had not the time passed for the two miles? Had not the 40 minutes come and gone? I had not a watch to know. Hunter was wearing it that day. I began wondering if I passed it in my hurriedness. Water sources aren’t magically spouting out the side of a mountain RIGHT on the trail, in plain sight. You nearly have to work for them. It’s not unusual to climb uphill or slide down to reach one, they aren’t marked or noted among the trees. It’s the wild, after all. And it was as if I were part of the wild then. I was hunting for it like a bear just out of hibernation hunts for a fast kill. Sensibility was no longer driving my every move. Instead, thirst had taken the front seat and it was maneuvering with reckless abandon.

And then, suddenly, there it was: A sight I had longed to see. Both of the boys were sitting down, packs off, snacking on packaged goods. “Is there water here?” I shouted, surprising myself with the panic in my voice. “No,” they replied, clearly distraught. They, too, had run out of water. They, too, had looked in their data books. They, too, had been rushing to fill up. And they, too, were disappointed when they realized that they had hiked two miles beyond the documented trickling stream, only to still come up empty-handed. We didn’t know if we overlooked it, or if it was just dried up. Like I said, it was the desert.

I could have crumbled into a wilted pile of tears—so thirsty that I felt like I understood madness at a level so deep, I empathized with people who talk to their own hands. We knew that our information didn’t list any more water for another ten miles. We knew that the heat was well into the 100s. We knew that what we were doing was extremely dangerous and painful. But a choice we had not. Just a day before, a hiker was found unconscious on the trail from heat stroke. We knew that was clearly our fate, unless our bodies could pull through a 15-mile hike on absolutely no water. It felt impossible.

I sat down. I said nothing. I think I closed my eyes. But I know that I prayed a prayer so innocent and heart-felt that all I could muster in my thoughts was, “God…please. Send us water.”

The miles drug on like an endless, shapeless maze. I’ve never wandered so mindlessly and desperate in my life. And just when I thought that the day would end with search and rescue, a miracle lie before us.

There was water where water should not have been. And I knew, that no matter what anyone thought or said, that God had sent it. And I drank from it like it was the source of Living Water itself, even though I already knew Him. But now I knew Him to be more tangible than if I could have physically wrapped my tiny arms around His big, big chest. And He had brought me the one thing I needed more than anything else in the entire world, and He brought it miraculously, graciously, and with the full knowledge that the emptiness was my own fault.

And THAT was the God that I met in the woods, on a day I didn’t expect Him to break into my world, and re-teach me the truth and reality of The Gospel—plain as night when the factory shuts down. And I was forever changed in one small day on the Pacific Crest Trail, among hundreds of endless days, where I was changed even more, and experienced the reality of His presence. If you’ve never seen God stop rain in the middle of a rain storm, or have Him provide you with a borrowed car to drive miles away from the trusted owner to buy food, or save your life as you fell in a raging river, or down an ice slope belonging to a mountain 14,500 feet high, you haven’t quite met Him the way that I have. I believe I’ve even heard him whisper to me through the tree branches.

Oh, but He’s just waiting on us to ask.

This truly is an incredible anniversary, and a beautiful tribute to a year that has come and gone since I hiked the Pacific Crest Trail.