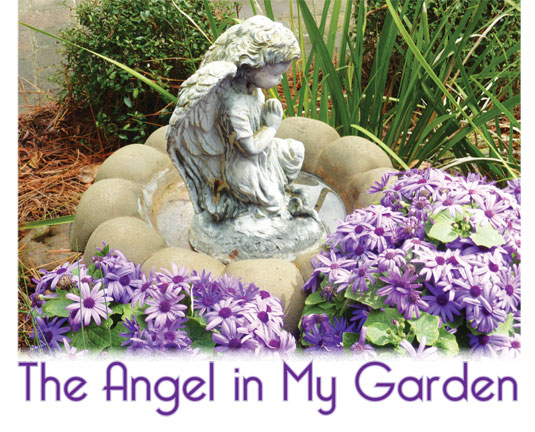 There was an angel in my courtyard! She appeared as angels often do...quietly, unannounced. In a hurry to complete my to-do list, I did not notice  her presence in my newly planted garden until early evening. Poised in the courtyard, centered in the birdbath, the angel statuary created an aura of peace and tranquility for the garden. The angel was placed into my busy life by an "earthly" angel to remind me of the art of living. Guiltily, disappointed in my lack of awareness, I parked myself in a lounge chair to gaze at the angel, flowers rising beneath her, hands folded in prayer. Smiling, I thanked God for my friend's thoughtfulness, and slowly became aware again of nature's bountiful creations and the special world in which we live.

That awareness followed me to the bank the other day. I randomly asked the tall, suited friend in line in front of me when he had last walked beside the ocean. Pausing a moment, he declared, "At least two years ago. I often enjoyed the beach when we first moved here from D.C." His cell phone intruded on his thoughts and our conversation. Handling it with polite efficiency, he turned back to me. "I moved here to escape the pace," he smiled, as his cell yelled again. "I must admit it gets hectic here, too. We forget how beautiful it is." Sigh...clutching his iPhone, "When I return to D.C. for a few days, it puts everything in perspective again."

Consider the graceful arches of trees decorated with lacy Spanish moss that reach over many Lowcountry roads, rainbow sunsets from numerous locations, the soothing sea and its romping dolphins and swooping seagulls...our gifts each day. Years ago, I interviewed  friend and artist, Nora Bottari, known as "the cloud lady." Now deceased, her magnificent paintings left us a poignant message: look up and behold. In fact, look up, down and all around, being sure to take the time to live, as well as to make a living?

Some retirees declare, "We're busier than when we worked!" Thus proving once again that the pace we generate for ourselves leaves less and less time for thankfulness, self-reflection, and spiritual connection. Often in our scurrying, we miss breathless scenes about us, which can quickly enrich, renew, and most importantly...remind.

Good morning!" resounded cheerful, busy investment advisor, James Moore. "How are you?" I asked. "Great! How could I not be in this beautiful place in which we live!"  Bingo! He gets it!

On a recent warm winter morning while eating breakfast, my husband motioned toward one of our birdbaths and exclaimed, "Oh look!" Three bluebirds fluttered about in glee. In pure Disney fashion they quickly scattered away. Later in the week  I was able to capture another treat: Mrs. Mama and Mr. Daddy cardinal enjoying a sunny bath just outside our window. Recently, rushing-once again-to my Village at Wexford office, I was stopped in my tracks. I quickly, but gently, backed up to my car for the camera. As if contemplating his own rushed life of gulping fish and charging across lagoons, the stately blue heron paused on top of a parked car! Hopping elegantly to the adjacent SUV, he gazed poetically, skeptically around at his new venue, and seemingly posed as I snapped!  Surely that parking lot gave even him new perspective and appreciation for lagoon living!

Our daily routines often interfere with relishing life, which can quickly or tragically slip away from us all too soon.  Let's grasp every moment, inject our lives with laughter and hugs, and pray thankfully for our freedom and all of life's blessings. Let's lift our heads each morning and sing for joy as Bing Crosby so wonderfully crooned: "You have to accentuate the positive, eliminate the negative, latch on to the affirmative, and don't mess with Mr. In-Between!" How precious are the birdbaths of life.it's time to jump in.