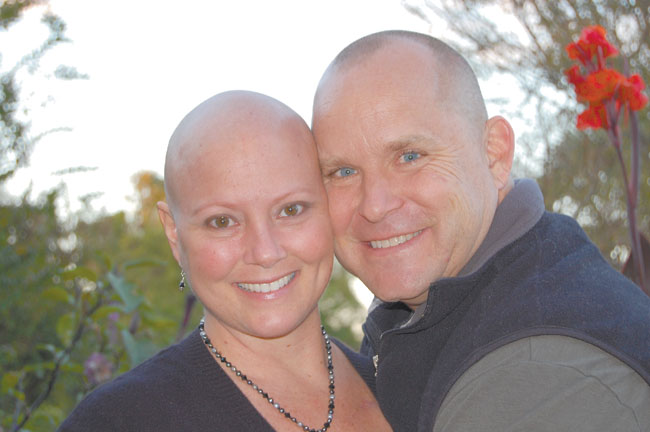 Check the list of top reasons why people divorce and Terry and Doug Bleam have experienced most of them just this past year - a move, a move back, a career change, a long-distance relationship, a few financial burdens and a catastrophic illness. However, for this couple, their hardships only drew them closer.

Terry was only 17-years-old when she returned home to Ft. Myers for spring-break vacation from her work in California. As she met up with friends on the beach, she became captivated by a young, good-looking 20-something playing volleyball.  She pointed him out and told her friend, "that's the guy I'm going to marry". Later, that evening, she passed that guy on the stairs of a beach cottage where everyone was hanging out. He stopped her to point out that she had something on her chin. When she asked what, he responded by saying, "my lips". Then Doug sweetly kissed her chin, which stirred emotions within both of them that would lead to a life of togetherness.

Love was in the air that night as Terry shared a drink from a styrofoam cup with Doug, she carved their initials into it, D+T, as to not mix their cup up with others. Doug picked the cup up and added = L. Little did they know that this simple equation, D+T=L, was the formula to their future marital bliss. By their second or third date, they were already talking about kids. D+T=L is still a mantra they live by today.

Only three months into the relationship, Doug packed everything he owned into his Mitsubishi and drove across America, from Florida to California, to be with his love. Upon his arrival, they met at a beautiful lookout in Newport Beach to greet each other. This romantic location became a landmark for their relationship. So much so, it was a stop both times on the way to the hospital when Terry was in labor with their oldest two daughters.

While two large sofas are available for seating in the Bleam's family room, Terry and Doug stuffed themselves, side-by-side, into a single oversized chair. They admit that they are still incredibly attracted to each other, in addition to "being best friends and a good team". Although romance has always oscillated through their relationship, it has not been all champagne and roses. Only one year into their 21-year marriage, Terry was diagnosed with a blood disorder called ITP.  It would prove to only be the first in several more serious diagnoses to come.

In 2003, Terry learned she had Multiple Sclerosis, then in May 2010 she was diagnosed with breast cancer. Doug was by Terry's side every step of the way. "While waiting for the surgery, we felt helpless. At least when the chemo started we were physically doing something about it," said Doug, who went to every single chemo session where they played Cribbage every time. "She is 15 and 0 and I taught her how to play!"

Knowing what was coming, the Bleams were proactive to Terry's hair loss. Doug said, "For years, I had always made it a point to tell her how much I loved her long hair. So I knew we had to do this together." First they both went short, and then they let their girls shave their heads. Terry recalled, laughing, "Doug blew me off with a leaf blower after the girls shaved my head!

It was great that he shaved his head too. When I was out by myself or just with the girls, people would look at me with pity. But when Doug and I were out together, with both of our heads shaved, people responded differently. It was like we were some modern, cool couple." October 27 was Terry's last Chemo treatment, and since then, Doug and Terry have been growing their hair back together.

With the worst behind them, Terry now faces the beginning of reconstruction, which starts in March with a 12-hour surgery. The good news is there are no signs of cancer, and miraculously, there is no longer any signs of MS either. "We learned long ago to quit forcing plans. If God opens the door, we'll go through it together," Terry explained. "We're ready for some normal years, not having to deal with the scary stuff," Doug said, adding, "Plus, I'm ready to have my snorkel buddy back!"

Children: Three daughters, Sarah, 17; Samantha, 15; Sabrina, 10; and Scarlett (the shelter dog)
Favorite Thing About Each Other: Terry - "He makes me laugh. Everybody likes him. He's strong and I like that he's a great guy inside and out." Doug - "She's easy to get along with. She has a great head on her shoulders.
Something that would surprise people about Terry: She was a big-time model, with magazine covers and all.
About the Two of Them: They still hold hands every time they watch TV together.
Doug's Secret to being a great husband: "I try to be less domineering and listen. I trust her decision-making abilities and her thought processes. I let her have her say.
Blessed by: The generosity of their church friends -the help, the love and the service. There was always food. They came over and cleaned and no one ever waited around for an "atta boy".