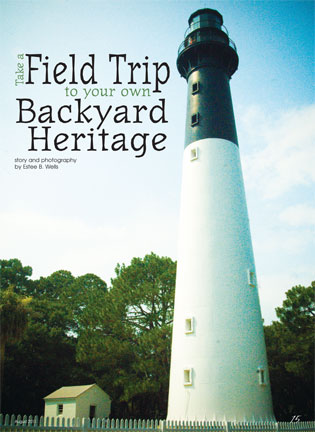 When was the last time you took a field trip . in your own backyard? A quick search on the Internet will locate hundreds of historically significant sites scattered across Beaufort County, like a connect-the-dot picture to a world of history. But how many of us even notice the markers, let alone pull over a half-mile later to turn around and appease our curiosity? And as a result, what are we missing?

The Hunting Island Lighthouse
One of the few lighthouses designed to be disassembled, the lighthouse on Hunting Island has stood tall since 1875. Displaying a spectacular view, the observation deck sits above 167 steps. After some delay with the Civil War, the lighthouse was built out of cast and wrought iron staircases and support beams. Its unique transportable quality came into play when severe beach erosion brought the tide 35 feet from the lighthouse keeper's front door. In 1889, the lighthouse, keeper's house, and outbuildings were moved a mile inland to its present location. Becoming a symbol of safety, the lighthouse served as a sanctuary for passengers of stranded boats during the Sea Island's hurricane in 1893. The lighthouse was retired from faithful service in 1933. Open to the public, the ancient tower continues to stand as a witness to more than a hundred years of history.

"How many of us even notice the markers, let alone pull over a half-mile later to turn around and appease our curiosity?" 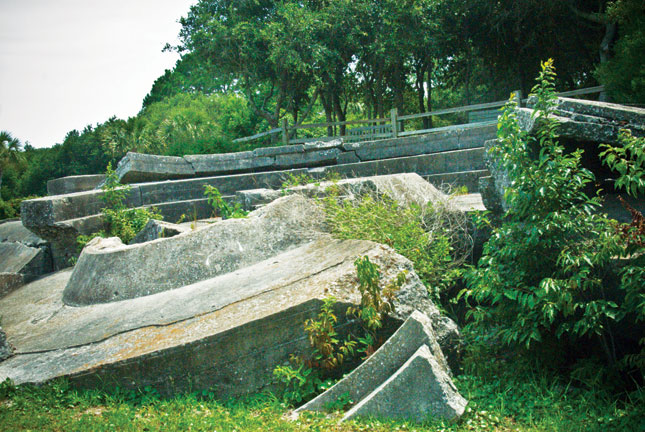 The Hilton Head Steamgun
One of the most poignant stories of the Civil War took place off the shore of Hilton Head Island. Thomas Fenwick Drayton and his brother, Percival Drayton, were both men of loyalty. One felt the call to defend the flag, and the other, the state. In the battle of Port Royal, the brothers faced each other in combat. Though they both survived, the brothers never reunited. Built to defend the very port for which the brothers fought, a steamgun's impressive ruins still guard the shore at Port Royal Plantation today. One of 13 produced, the gun was constructed in 1900. The 50-foot-long gun shot a seven-foot, dynamite-loaded projectile as far as three-and-a-quarter miles. Between 1901 and 1902, the steamgun was fired more than 100 times in defense of land and lives. 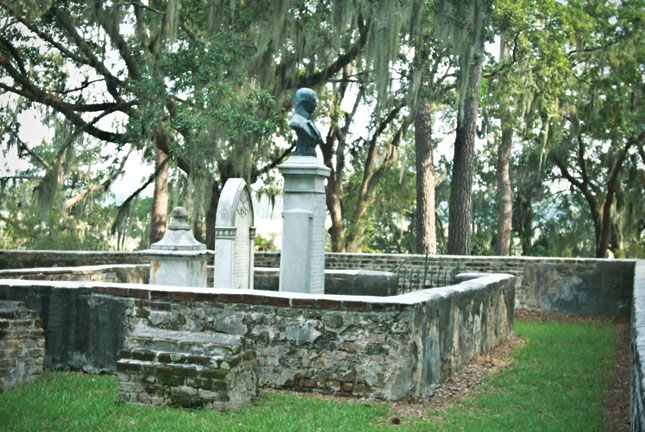 Tomb of Thomas Heyward, Jr. (Marker# 27-7)
A signer of the Declaration of Independence, Thomas Heyward is buried a few miles from my house, off of Hwy. 462. I pass the marker on a weekly basis but it was only after my boss mentioned her visit to the site that I even noticed its existence. I made the short trip to the marker and discovered -the site not only held the Heyward family cemetery, but also the location of the old plantation house. A national hero and an inspiration to all Americans, Heyward served on the continental congress and served as a representative of South Carolina. Commanding a militia force during the Revolutionary War, Heyward was captured by the British and imprisoned. After the war, he served as a judge. No matter where his travels took him, he always followed his heart back home to South Carolina and was one of only four South Carolinians to sign the Declaration in 1776. Retiring in 1798, he died March 6, 1809 and was buried at his home.

"These historical sites are memorials of gallant men and women, valiant sacrifices, and decisions that continue to affect our daily lives." 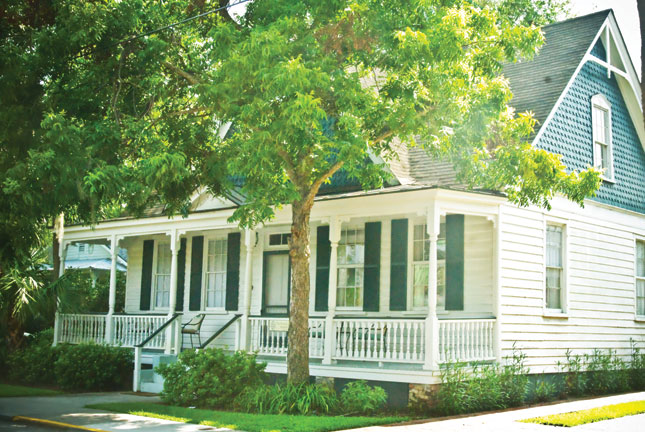 Beaufort Female Benevolent Society
Just miles away, downtown Beaufort is laced with historic buildings. On Scott Street sits a quaint old house built by the Beaufort Female Benevolent Society. Established in 1814, the society devoted itself to caring for children in need. After building and leasing the home, the society used the rental income to fund humanitarian projects throughout the area. Though the house was sold in 1982, the proceeds continued to help underprivileged children in honor of the passionate women of the society. Who can calculate the ripple effect their ministry continues to have in our community today? 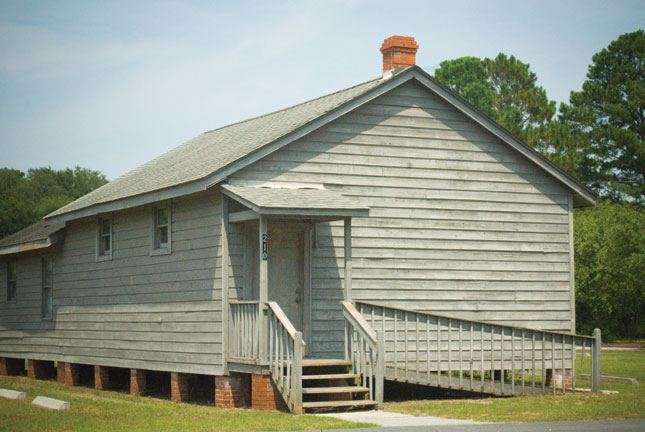 Mitchelville Site (Marker# 7-23)
Established in 1862 and located on Hilton Head Island, Mitchelville was one of the first freedmen towns of the South. Fleeing from the union, the plantation owners and residents of the island left behind 150 slaves. Increasing to 1,500 residents with the influx of escaped slaves, the neatly arranged town included a church, elected officials, education for ages 6-15, and a compulsory education law, which is considered the first southern law of its kind. Supporting itself largely by wage labor for the military, Mitchelville functioned as a tight community well into the 1920s. Mitchellville's successful story proved a model for many post-war towns across the South. Many people today trace their roots back to this little community.

Silent tributes amidst the bustle of modern living, these historical sites are memorials of gallant men and women, valiant sacrifices, and decisions that continue to affect our daily lives. A few historical trips around my neighborhood gave me a hands-on education of the local history and a deep pride in my land and county. This August, treat yourself to a local fieldtrip and discover the rich heritage in your backyard.