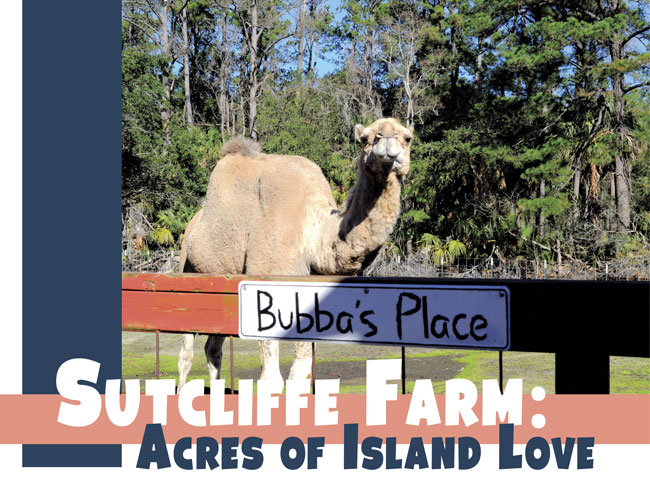 At the tip of Saint Helena Island, tucked away on Eddings Point Road, is a very special place. Sutcliffe Farm, as the sign modestly states, is a true refuge—a serene island sanctuary where animals of all shapes and sizes are kept safe, clean, healthy, and most of all, happy. It’s The Garden of Eden, Noah’s Ark, and Dr. Doolittle’s wonderful world all wrapped up into one.

Terry and Elaine Sutcliffe, the farm’s owners and operators, are both native Beaufortonians, who run a family businesses in Port Royal, and who followed their hearts and bought the waterfront acreage on St. Helena 47 years ago. They built a house, had kids, got a few dogs and cats, and added a horse. That was the start of it all.

Today, in addition to two more houses, where their sons and grandchildren live, Sutcliffe Farm is home to more than 70 domestic, wild, and even exotic animals. “Bubba, the camel is the star,” says Terry as he leads me to the camel’s pen. Indeed, Bubba has many videos on Facebook, particularly on Wednesday “Hump Days” when he “says hi to folks and let’s them know how he’s doing.” The camel is about 20 years old and huge, probably weighing 2,000 pounds, and his head and hump rise almost seven-feet in the air!

Of course, the obvious question is: “Where in the world did you get a camel?”

Terry and Elaine tell the story together, probably for the zillionth time, but graciously. There was an exotic animal auction near Jackson, SC, and Terry went and bid on Bubba. After he brought him home, he realized what a handful the camel was. Not mean, but so incredibly big, that the animal can sometimes hurt people accidentally. “We had to send him to camel school in Ohio” the couple admits in all seriousness. I can’t help but wonder if they’re pulling my leg, but indeed, it turns out there is such a thing as camel school. In Ohio, Bubba learned basic ground manners similar to skills horses learn, such as walking with a halter, not stepping on people’s feet, and so on. “No, we don’t ride him,” is the reply to my next obvious question. Bubba nuzzles Terry’s baseball cap, indicating he wants to be rubbed on his head.  The two have a special relationship.

Actually, Terry is great with all of the animals. 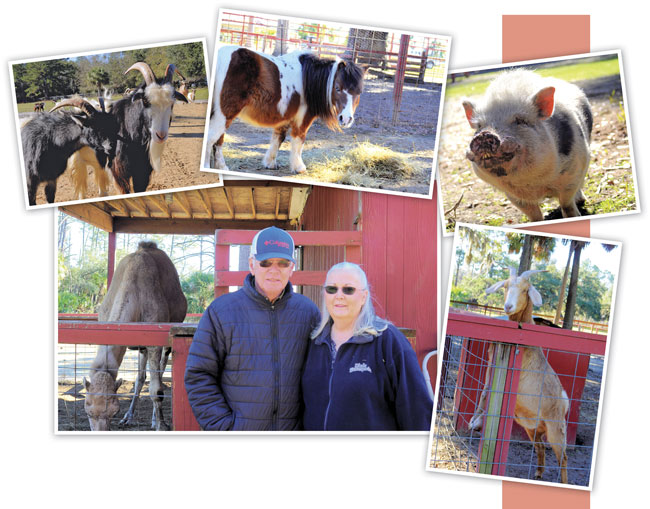 As if to prove it, Minnie, a huge pot-bellied pig, trots up seeking his attention. Minnie was abandoned by her owners because she grew too large to be considered cute.  Across the way, a 36-year-old horse hangs out in the warm sunshine, grazing on hay in a large pasture alongside a lovely cow. A miniature donkey hasn’t yet joined the meandering menagerie, and Terry goes inside the barn to investigate.
Sutcliffe Farm is remarkably clean. The animals are kept in raked, dry, and spacious pens, with irrigated water bowls, and food to munch on. There are rain shelters and lots of room to run.  Each animal has at least one buddy or more to hang out with, not necessarily of the same species. After 40 years of observing how animals get along with each other, Terry has it down to an exact science. “We have a few animals that have to be alone,” he says. “You know, they just can’t get along with anybody.” He grins. “Kind of like some people.”

A lot of work goes into caring for this many animals. They are fed, watered, and checked on before the couple goes into town to work at their golf cart business each morning. The process is repeated at night, and the Sutcliffe’s have one person who helps clean up for them. Elaine says, when they return in the afternoon, the entire animal farm comes rushing out to greet them.

A chunky chocolate lab accompanies us on the tour. His name is Brown, typical of all the names the Sutcliffe’s give their animals: short, sweet, and descriptive. Brown wags his tail constantly, and checks on all the other animals. He loves to play with a piece of PVC irrigation pipe, throwing it around, carrying it in his mouth, and bringing it to humans to admire. He’s a happy dog—just like every animal
that’s been lucky enough to find its way to Sutcliffe Farm.

“Two hurricanes in two years changed our lives dramatically,” says Elaine, pointing to the river behind their house. “Water came up two, three feet here during Hurricane Matthew. Flooded the house and everything.”
“What about the animals? I ask. “What happened to them?”

“We evacuated them,” she replies, as if the question were rhetorical.

Elaine and Terry both take up the story. It took four round-trips, going from the island inland to Denmark, SC—a trip of about 100 miles each way. “We keep several animal trailers of various sizes parked on the property for just this reason,” Terry explains.

“Bubba’s (the camel) trailer door came off accidentally during the last run, but he didn’t run off,” Elaine says. “I was able to stop the truck, and get the heavy door back on. Bubba just kept on munching his hay. Thank goodness he had been to camel school, and knew how to behave.”

They got all the animals safely to high ground during Matthew, but came back to an absolute mess in their house and on the grounds. It took months to get downed trees and other debris hauled off before they could even get to their flooded house. Then they did it all over again the next year with Hurricane Irma.

And, both times, they did it for love.

Terry and Elaine both have a deep love for these animals, and understand that the animals are getting older—just like they are, they joke. Most of these creatures have been dropped off by folks who can no longer care for them, or they are found hurt and injured along the road. People in the area know the Sutcliffe’s will take in almost any injured or sick animal, and give them a good home as well. They even have a special barn for sick or wounded animals. “It’s kind of like assisted living,” Elaine quips. An elderly sheep has to be picked up several times a day because of its severe arthritis. A deer with a brain injury, who will probably never recover, is treated with kindness and compassion.  A one-legged duck blinked at us with interest and absolutely no fear.

The Sutcliffe’s have followed their heart with respect and love for all creatures big and small that find their way to the farm. They are “living the dream” expressed in Albert Schweitzer’s famous quote:  “Reverence for life affords me my fundamental principle of morality.”

A great quote on their FB page from Ronald Reagan: “We can’t help everyone, but everyone can help someone.”

A partial list of Sutcliffe Farm residents: Birds: doves, pigeons (one really likes to perch on Terry’s head), peacocks, chickens, roosters, Canadian and other geese, Muscovy and other ducks, turkeys,  ostriches, emus. There is lots of bird talk going on.  Four legged critters: miniature and full size horses, miniature and full size donkeys (one really loud one!), rabbits, cats, dogs, pygmy and full sized goats, pot-bellied and regular size pigs, hogs, llamas, sheep, many deer, raccoons, possums.
A little scary: There’s a wounded buzzard on the farm named Buzz who looks you right in the eye (and gave me chills). They feed him canned cat food.

Exotic and undisputed star: Bubba the camel. Just watch out for his long legs and tremendous feet!