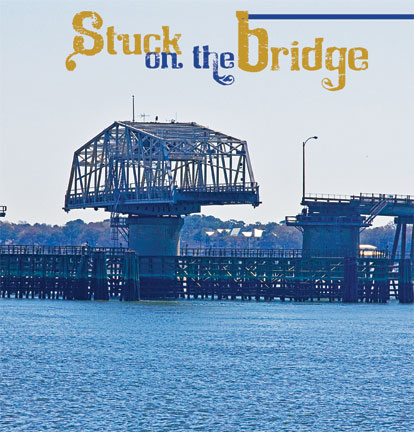 People in Beaufort have a real blessing in their lives, but they don't even realize it. Many see it as an annoyance, an aggravation, something to avoid, even  to the point of making a screeching U-turn and going the long way around. It's called being "stuck on the bridge".

I don't see it as a nuisance.. When I see the yellow flashing lights that warn the bridge is going to open, I breathe a sigh of relief. God, or karma, or the South Carolina Department of Transportation, however you want to see it, has just given me a "time out". I feel like a wise, caring teacher has put me in a corner, or a little designated chair, and I have to sit there and think about what I've done, or how I'm supposed to act. I like the fact that the bridge is open, and I have absolutely no power to change it. I tell myself to just breathe and enjoy the "time out".

Several times a day, the swing bridge going over the Beaufort Bay from downtown Beaufort to Lady's Island opens to allow boaters on the Intracoastal Waterway with masts taller than 30 feet to pass through. The motorists going over the bridge are alerted with flashing lights, while a barrier guard (repaired courtesy of Gen. Jimmy Leach) swings into place to prevent a hapless driver from driving off the open end as the middle of the bridge swings around on its pedestal.

My aunt Nadine was famous for always dodging through the barriers on the old swing bridge. One day she didn't make it across before it started to open. The bridge tender, a cousin of hers, saw her gunning it like she always did, and flipped the open switch anyway. She was forced to slam on brakes in her '50 Cadillac, and ride it out on the middle as the bridge swung open. A ticket from her daddy, the police chief, was waiting for her as the bridge closed, and she drove into town.

"Being stuck on the bridge is a universal excuse for being late anywhere in Beaufort. The wait can last from five minutes to even longer, if traffic builds up on either side. Usually it's a short time period, but sometimes things happen. A car will break down, or the bridge will get stuck mid-opening or closing. Actually it's a miracle this doesn't happen more often when you consider all the gears, levers, motors, and human errors that can occur.
If you're on the Beaufort side there are not many spaces directly on the bridge approach to see the breath-taking view. Traffic can be backed up as far as USCB and Bellamy Curve, or pretty far down Bay Street, but you still get time to stop and think.

But if you are on the Lady's Island side when it opens, you are in for a treat. Thirty or more cars get temporarily assigned parking spots with a million dollar view. I like to put my car in "park", roll down the windows, and just breathe in the air. Sometimes I even get out and walk over to the railing.  I enjoy the view, and sometimes, even get a few insights or life lessons as I get to time to reflect.

The view stretches from Brickyard Creek to Port Royal Sound, from Marsh Harbor to Parris Island, depending on your place in line. I gaze at the two white church spires, the Baptist Church of Beaufort, and St. Helena's Episcopal Church. I think about playing the organs at both of those churches, and how much I love those old church buildings. Then I think about the people who make up those churches, and how much they mean to me. I wonder things like how much does a steeple cost, and I wish I could buy a nice, big fancy one for First Presbyterian.

I look at the sailboats docked at the Beaufort Marina and think about whether that lifestyle would work for me. I think about their tiny little showers and lack of closet space. Not for long, I always conclude, especially when it's cold and windy.

Sometimes there's a small cruise ship docked at the Waterfront Park, with lots of well-to-do cruisers disembarking to visit our beautiful little town. For years I tried to talk my mother and her best friend, "Berdie" to take one of those cruises. They went and visited the ship once, and got brochures, but were horrified and indignant at the prices. Only a year or so later they were both spending twice that much on assisted living, and later, nursing home fees. I wish now I had just "hogtied" them both, and made them take the expensive cruise, and enjoy their money while they could. Life lesson: Life is short. Enjoy it while you can.

I gaze at the stately old homes on Bay Street and wish I lived in one. My dream house, the solid brownstone, second on the left on Bay Street Extension is still for sale, waiting for me. The two million dollar price tag is still there too. Gazing at those homes makes me think about the people I know who live, or lived in the past on the Beaufort Bay. I recite them to myself: the Dowling's, the Thomas's, the Baptist preachers in the parsonage, the Bellamy's, the Logan's, the Brown's. How lucky they were, and are, to have a view like that. It changes twice a day, with the tides, and provides a parade of dinghy's, jet skis, fishing boats, kayaks, shrimp boats, police boats, cruise ships, and bateaux. Then I think about what their tax bill must be. Ouch.

If it's high tide all the mud is covered, but I remember where the creeks are. A wise boater always learns the river at low tide; my husband taught me. Life lesson: Things aren't always as they seem, and you can get an abrupt jolt and gash in your hull from an oyster bank when you thought all was well, just cruising along. All your plans in life can change in an instant: that's what I think when I look at high tide.

If it's low tide, you can see the oysters perched on their mud banks, spitting water through their shells. I see how alive, fertile, and pungent the marsh is. Hardy souls have walked out on the mud banks to catch shrimp, dig for clams, or rake oysters into their recycled paint buckets. When it's low tide, you see how the river meanders into the grass bringing nourishment from the ocean, but changing a little bit every day. Another life lesson: Nothing stays the same. The sandbar that was here last year has now changed its location a little.

In the river, on a truly lucky day, you can see a dolphin family playing together. I enjoy seeing their slick grey backs rising and falling as they swim by, do flips, make circles, and then dive under again to reappear further down the river. It is pure joy to watch them.

In this brief time out, I always try to say prayers for my friends and family. I ask God to look after them, protect them, and direct their paths. I hand them over to Him while on the bridge, and tell Him that I know He is in control of all things.  That resolve usually lasts only as long as the bridge is open however. When I'm back driving again, I usually take their problems back as well, and my mind races with "fixes" for all of them.

Only too quickly for me, the boat that caused the opening has passed through, and the bridge swings back together. The roadway fits back into one piece again, the barrier guard swings back into place, the crossing arm goes up, and my time out is over. It's time to get it in gear and move on in an orderly line. I can almost hear the teacher as I am released: "Did you think about what you've done?" "Are you ready to join the group? Do you promise to play nicely?" I take a deep breath and say yes, thank you. I needed that.