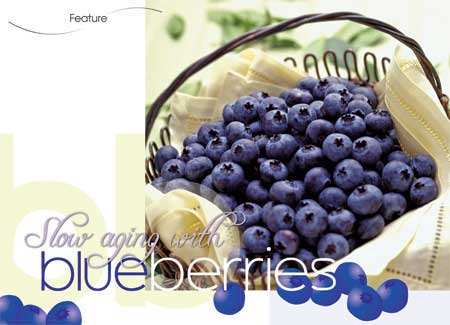 Millions of people enjoy blueberries because they taste good and are
versatile enough to be part of many different menu items. Blueberries,
however, are also nutrient-rich and offer a host of health benefi ts, one of which may be slowing down the aging process. This isn't to say that blueberries can turn back the hands of time, but they may help slow down some of the typical side effects of aging, most notably diminished mental capacity. In a USDA Human Nutrition Research Center laboratory study, researchers fed blueberry extractions to lab mice. The extractions were the equivalent of a human eating one cup of blueberries per day. The mice were then run through a series of motor tests. The mice who were given the blueberry extractions performed better than the control group on motor functions and memory. They also showed an increase of exploratory behavior.The antioxidant components of blueberries that give them their vivid color help reduce oxidative stress, as observed after looking at the brains of the treated mice. Oxidative stress is damage to cell membranes and DNA from free radicals. Antioxidants are known to fi nd and eradicatefree radicals. Oxidative stress is thought to be
a main culprit in many of the dysfunctions and diseases common to aging.The research on mice bodes well for people, primarily because the senior U.S. population continues to grow. By 2050 it is estimated that more
than 30 percent of the population will be over 65. It's likely that these individuals will be interested in looking and feeling their best for years to come. Because of their neurological, motor-function link, blueberries
may be essential to reducing the severity of neurological diseases, such as Alzheimer's and other dementias.Apart from anti-aging properties, blueberries and their antioxidants can help with general health as well. There have been links to diets rich in blueberries and urinary tract health due to reduction of the adhesion of bacteria. Plus, blueberries may play a role in preventing certain cancers and cardiac issues.Individuals interested in adding blueberries to their diet can do so in many ways. Whether enjoying blueberries atop cereals, on muffi ns, added to salad,
or simply straight out of the refrigerator, incorporating servings of this fruit into a diet can be beneficial and delicious. For more creative and delicious blueberry recipes, log onto www.blueberrycouncil.org. 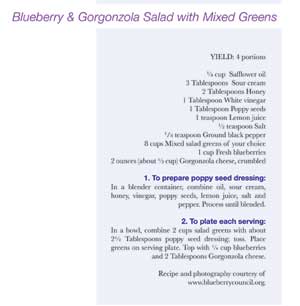