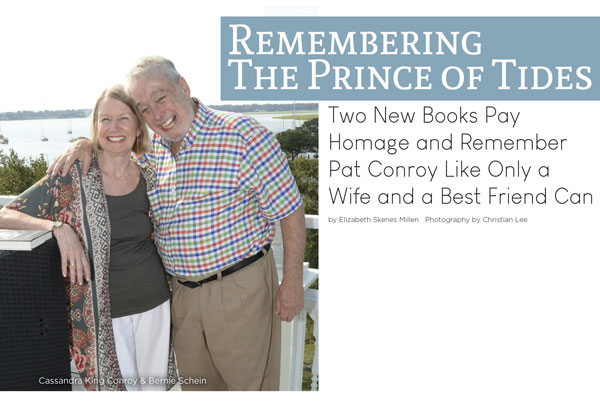 Some say life is only as good as the people you surround yourself with. For Cassandra King Conroy and Bernie Schein, life has been great…interesting, intriguing, exciting and loving. One a wife, and the other the ornery best friend, these two became intermingled because of the love that surrounded them from one legendary man—Pat Conroy.

I arrived at Cassandra’s home in Beaufort, SC,  to talk to her about her new book, Tell Me a Story: My Life with Pat Conroy, which hits the news stands on October 29.

Cassandra, an award-winning, bestselling novelist, was married to Pat Conroy for the last 18 years of his life. They met at a literary festival in the mid ‘90s in Alabama, where Cassandra is from, and he never let her go. “We met in LA,” she laughed, “lower Alabama!” We both cracked up with laughter and settled in for what became a comfortable two hours of reminiscing, swapping stories and talking about Pat.

“The first two years we had a phone relationship. As far as I knew, we were just friends,” Cassandra said of her courtship with Pat. “I was in Alabama and he was here.” I pointed out that the back cover of the book (pre-release copy) says he partly married her because he hated the commute. We looked at each other and cracked up again. Pat Conroy knew exactly what he was doing when he married Cassandra, and though the commute may have been shorter with her living in the same house, his heart longed and belonged to her.

Pat’s untimely death in 2016, after a short bout with pancreatic cancer, left Cassandra empty. What do you do when you’re married to the love of your life, who also happens to be a legend, and suddenly that legend is gone? For her, she found solace in remembering Pat through story and turned to her craft to tell her own story about her husband, the man she adored and shared with the world.

One of the funniest stories she told me was how she had to call for her own ambulance one day. And, she tells these stories with deadpan expression, which makes them even funnier. “Pat and Bernie were in the den, engrossed in being Pat and Bernie, and I told them I didn’t feel good. Well, neither one of them did anything about it. So I called 911. The ambulance came and got me and took me to the hospital, and neither one ever knew. Pat called my cell phone a little later and asked me where I was. I told him I was at the hospital.”

Tell Me a Story, Cassandra’s sixth book, is a loving tribute to her husband. “Pat was a fantastic storyteller. He was fascinated with everyone’s story. I couldn’t have named it anything else. I’m excited about sharing stories about Pat. He was such a joy. It just means the world to me and keeps me going.”

Fun Facts:
> Pat Conroy wrote everything by hand.
> Cassandra says she needs music, specifically bluegrass,
in the background while writing—“to get into the mindset.”
> Tell Me a Story started out as a cookbook mixed with some stories about Pat. Her editor told her it was too “light” and directed
her to lose the recipes and go deeper into memoir.
> Cassandra was 50 years old when her first book came out.
> When Pat was really sick, he made Cassandra promise
she would get back to writing. 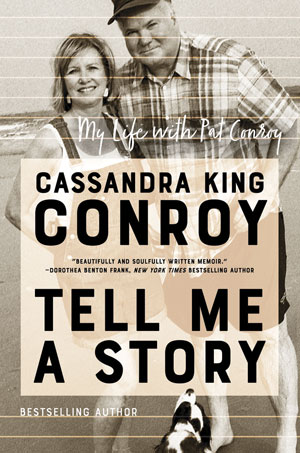 About the Book (Publisher's Notes)
Tell Me a Story: My Life with Pat Conroy
(William Morrow, October 2019)

The story begins in 1995 when Cassandra travels to a literary conference reception in Birmingham, AL, where she would go the next year to present her debut novel. The honoree is Pat Conroy, but Cassandra arrives late and assumes she has missed the opportunity to meet one of her favorite authors. She consoles herself at the refreshment table until she is interrupted by Pat, clad in rumpled khakis and a lumberjack shirt. She thinks he’s a spouse of one of the attendees; he thinks she’s the caterer.

Despite their inauspicious start, Pat and Cassandra develop a close friendship, limited to lengthy telephone calls since their schedules constantly conflict. Cassandra, a very private person, describes talking to Pat in a way she’d never done with anyone else, how he became her closest confidant. Their relationship remains platonic until two years later they meet for dinner in Atlanta. Sharing feelings and in-depth stories of their former lives and spouses, their romance begins in earnest. Eventually Pat confesses he loved her from the first time they met.

In this poignant, intimate memoir, the woman Pat called King Ray looks back at her love affair with a natural-born storyteller whose lust for life was fueled by a passion for literature, food and the Carolina Lowcountry that was his home. As she reflects on their relationship and the 18 years they spent together, she reveals how the marshlands of the South Carolina Lowcountry ultimately cast their spell on her, too, and how she came to understand the convivial, generous, funny, and wounded flesh-and-blood man beneath the legend—her husband, the original Prince of Tides.

Be a Part of the Book Launch
Cassandra’s book will launch in Beaufort on October 29 at the home of Dr. Lucius and Daryll Lafitte. Limited tickets for this cocktail party  from 5:30-6:30 pm, which include a signed copy of the book, will be available through the USC Beaufort Center for the Arts website: www.uscbcenterforthearts.com. Cassandra will speak later that same evening at a free event, which is open to the public at 7:00 pm titled “Cassandra in Conversation” and  hosted by the  USCBeaufort Center for the Arts on the USCB campus.

At the front door of The Conroy’s home is a welcome mat of sorts; It states, “Go Away!” As soon as Cassandra Conroy opened the door, I was laughing at the unwelcoming sentiment. It just seemed so apropos for Pat Conroy. She immediately took me to the back door and said, “You have to see this one.” There, the mat stated: Oh Shit Not You again. She said this one is for Bernie Schein, Pat’s ornery BFF and frequent fixture at the Conroy home.

“I love talking about Pat every chance I can,” said Bernie Schein. This fact is evident in Bernie’s new book (released September 10) Pat Conroy: My Lifelong Friend (Arcade Publishing 2019). Talking to Bernie about Pat is beautiful and easy. He absolutely loved the guy, and Pat loved him.

“What makes the book special is Pat. Not many people in the world get you, and Pat just loved me to death. How can you not want to talk about somebody who just loves you to death? I felt the same about him. If Sandra calls hers a romance, I call ours a bromance. He talked about me all the time publicly, everywhere he went. I thought that was crazy as shit,” Bernie laughed.

“Writing this book was a healing process for losing a life-long friendship with Pat Conroy. There was a time when we didn’t speak. Even when we weren’t talking to each other, we couldn’t stop talking about each other. The last 10 years were so beautiful, and his capacity for change and growth was amazing. We were like an old married couple who finished each other’s sentences.”

“There’s a scene in the book: I went to say goodbye to Pat at MUSC, and we all knew he would die that night. I said, ‘Pat, who am I going to talk to? There’s no one else.’ The next morning, when he was surely supposed to be dead, he wasn’t. Pat got up: “I’m getting dressed, I’m going to Beaufort, to Bernie’s there. He doesn’t have anyone to talk to.”

“How can a person who felt he was incapable of loving and being loved, love more than anyone else in the whole world. Maybe that’s the way you do it. Pat's life was as joyous, as it was painful. He was the world. He was the whole f*&^ing world,” Bernie expressed.

“I will tell you Elizabeth, and there’s no doubt about it, he is such a loss. To have him come back into my life (through this book) is a great thing for me. My best friend was an asshole. Boy did I love him. So kind, so sensitive, so wonderful. He was a great writer because he was a great man. What he did for people was incredible.” 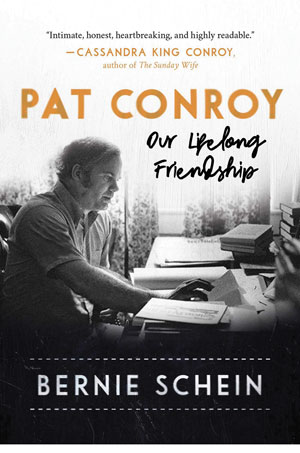 About the Book (PUBLISHER's Notes)
Pat Conroy: My Lifelong Friend

For Pat Conroy fans, Bernie Schein’s new book, Pat Conroy: My Lifelong Friend, is a loving, laughter-filled homage to a loyal, big-hearted friend. Pat Conroy, the bestselling author of The Prince of Tides and The Great Santini among many other books, was beloved by millions of readers. Bernie Schein was his best friend from the time they met in a high-school pickup basketball game in Beaufort, South Carolina, until Conroy’s death in 2016. Both were popular but also outsiders as a Jew and a Catholic military brat in the small-town Bible-Belt South, and they bonded.

Wiseass and smart aleck, loudmouths both, they shared an ebullient sense of humor and romanticism, were mesmerized by the highbrow and reveled in the low, and would sacrifice entire evenings and afternoons to endless conversation. As young teachers in the Beaufort area and later in Atlanta, they were activists in the civil rights struggle and against institutional racism and bigotry. Bernie knew intimately the private family story of the Conroys and his friend’s difficult relationship with his Marine Corps colonel father that Pat would draw on repeatedly in his fiction.

This book collects Bernie’s cherished memories about the gregarious, welcoming, larger-than-life man who remained his best friend, even during the years they didn’t speak. It offers a trove of insights and anecdotes that will be treasured by Pat Conroy’s many devoted fans.