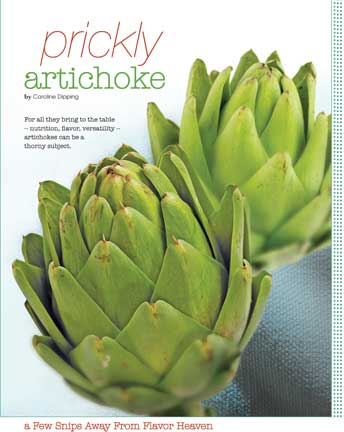 To the uninitiated, not only does this member of the thistle family seem bewildering to prepare, it can seem just as perplexing to eat. Are you really supposed to eat the leaves, needlelike tips and all? What about that fuzzy stuff in the middle?

Actually, with a few basic guidelines -- and a pair of scissors -- artichokes are as foolproof to prepare as they are delicious. They can be boiled, steamed, baked, microwaved, roasted, stuffed, sauteed and stir-fried. Every bit of it, except for the thorns and the fuzz in the middle, is edible. 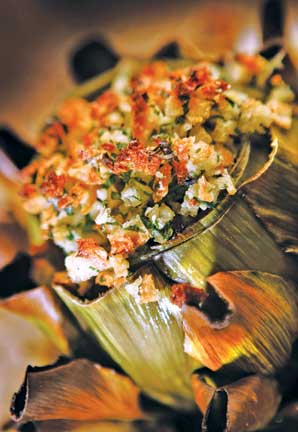 Nutritionally, artichokes are no slouch, either. A medium artichoke is 60 calories, has 10 grams of fiber and has a higher level of antioxidants per serving than any other vegetable.

"It's a dieter's secret weapon," said Kori Tuggle, spokeswoman for artichoke growers Ocean Mist Farms in Castroville, Calif. "In terms of health, it's great for you, unless you add all the cheese and stuff."
While they can be found year-round in the supermarket, artichokes are at their peak right now through May.

Dubbed the "Artichoke Capital of the United States," Castroville is the main growing grounds for this country's artichokes, with about 6,500 acres. In the early 1900s, Italian growers began planting this Mediterranean native on California's mid-coast, and the vegetable flourished in the mild temperatures.

Tuggle has spent the past five years trying to help demystify the artichoke. She knows that while their appearance is fascinating, it can contribute to the intimidation some have for the vegetable.

"I divide people into two categories," she said. "You have the artichoke amateurs and the artichoke masters. Even the masters need a little guidance sometimes.

"I know it's self-serving, but our Website (oceanmist.com) has more pages devoted to artichokes than any other site on the Internet. We really are a go-to resource.

"But I promise you. Once you figure it out, you will want to cook artichokes again and again."

Tuggle's favorite way to prepare an artichoke is to simply bake it. After cleaning it and snipping off the thorny tips, she spreads open the petals and drizzles on a little olive oil, double wraps it in foil, then bakes it for an hour to an hour and a half in a 425-degree oven. 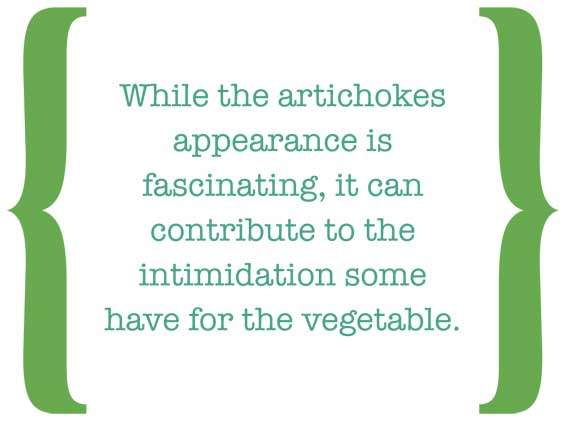 "You can cook one or a dozen that way," she said. "It comes out fabulously every time."

French-born chefs Marc Ehrler and Patrick Ponsaty of Loews Coronado Bay Resort grew up with artichokes as a staple. They are fortunate to have artichokes growing in the herb garden at the bayside resort, and they both favor baby artichokes (picked before they become hulking specimens) for flavor and tenderness.

Ehrler makes the most of them by roasting them, then dunking the leaves in a vinaigrette. He also likes to shave the raw heart into salads and steam the whole vegetable until it's really tender.

Chef Ponsaty likes to slice artichoke hearts into thin strips and saute them with a little olive oil, then use them to top pastas. He also likes to make barigoule, a traditional Provencal dish of braised artichokes in a white wine broth, which he uses as a topper for sea bass and scallops.

"There are so many options with artichokes," said Ehrler. "Purees, soups. What you can do with them is absolutely amazing.

"You can use them in any dish," he insists. "Artichokes could be the next chickens in America."

Caroline Dipping writes about food for The San Diego Union-Tribune.

4 large artichokes
Ω of a day-old baguette, made into crumbs by pulsing in a food processor
1 bunch of parsley, chopped
Ω cup extra-virgin olive oil, plus more for drizzling
2 cloves garlic, chopped
Salt and freshly ground pepper to taste
1 lemon, cut in half
Makes 2 servings, plus leftovers

Preheat oven to 375?.
In a bowl, with a fork, prepare the stuffing by mixing the fresh breadcrumbs, chopped parsley, olive oil, garlic, and salt and pepper. Set aside.
Prepare the artichokes by cutting off the stems. To prevent discoloring, rub the exposed cuts with one of the lemon halves. With kitchen scissors, cut the thorns off the tips of the leaves and rub the exposed cuts with lemon. With your fingers, open the center leaves to expose the inner leaves and choke. With a spoon, scoop out the center to the heart (inner leaves and furry stuff).
Stem side down, arrange the artichokes in an oven-safe pot or baking dish. With the leaves and heart open, stuff the artichoke with the bread mixture. Add about Ω inch of water to the pan. Drizzle artichokes with additional olive oil, salt and pepper, and squeeze the other lemon half over the stuffed artichokes.
Cover tightly with a lid or foil and bake until tender, about 45 minutes. Remove from the oven, remove the lid, and increase the oven temperature to 425?. Roast the uncovered artichokes until golden brown, 10-20 minutes. Remove from oven. Let rest 10 minutes. Serve.
-- From chef Marc Ehrler, Corporate Chef Loews Hotels