Continues the Literary Legacy of the Beloved Lowcountry Storyteller 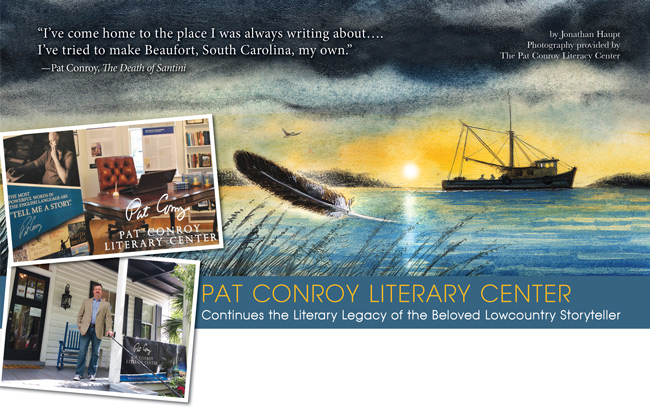 Stepping into the Pat Conroy Literary Center has brought many literary pilgrims to tears. The antebellum home that houses the Conroy Center at 308 Charles Street in Beaufort had no overt connection to the internationally celebrated best-selling author Pat Conroy (1945–2016)—but the diverse artifacts and myriad storytellers to be found at the Conroy Center reverberate with Conroy-esque intimacy and charm. There is, at once, both the presence and the absence of that larger-than-life author of a dozen beloved books, including The Water Is Wide, The Great Santini, and The Prince of Tides. This moving experience has already been shared with more than 2,500 visitors coming from 38 states and 9 countries since the Conroy Center opened to the public in October 2016.

The nonprofit Conroy Center was established following Pat’s death from pancreatic cancer on March 4, 2016. It was Pat’s widow and fellow southern writer Cassandra King Conroy who first noted the significance of the date—March Forth—as a final directive from her late husband to continue in his stead. The Conroy Center honors Pat’s legacy as a teacher, mentor, advocate, and friend to readers and writers alike.

At the Conroy Center, visitors can immerse themselves in Pat’s writing and teaching life. The galleries include Pat’s Fripp Island writing desk (at which he wrote, longhand, some part of his books from Beach Music onward); the flight jacket and medals of Pat’s father, Col. Don Conroy, The Great Santini; manuscripts; letters; photographs; awards; and much more. Visitors are often surprised by the breadth of the visual arts represented at the Conroy Center too, from movie posters to fine art prints of artwork from Conroy covers painted by Wendell Minor to a mural painted by Beaufort artist Aki Kato and a quilt made by Pat’s sister, Kathy Harvey. The Center’s collections also include pieces created by local high school students—a metal sculpture and donation box crafted by May River High School students and a recently added Little Lowcountry Lending Library created in partnership with Beaufort High School.

The Conroy Center has already been recognized with two national distinctions in our first year of operations. The Center was selected as South Carolina’s first (and only) affiliate of the American Writers Museum and as the Palmetto State’s second American Library Association United for Libraries Literary Landmark. Both honors make the Conroy Center part of national registries of literary tourism sites dedicated to fostering the legacies of American wordsmiths.

There is much more to the Conroy Center than just the interpretive center at 308 Charles Street, however. As part of our educational mission, the Conroy Center also hosted or participated in 70 public events in five states in 2017—from book club discussions and writers workshops to lectures, English teacher professional development, a visiting writers series, and our own annual literary festival. Here’s a preview of just some of what’s on the horizon for the Pat Conroy Literary Center:

Camp Conroy: Build a Book
June 18–29, The Mather School, Technical College of the Lowcountry, Beaufort
This new two-week camp for middle-school-aged students will teach burgeoning writers and artists how to write, illustrate, edit, design and publish a book. Advance registration required at www.tcl.edu.

2nd Annual Lowcountry Book Club Convention
Oct 6, Technical College of the Lowcountry, Beaufort
Free to all local book club members (or those interested in joining a club), this day of learning about literary community-building will be highlighted by a keynote conversation between writers and librarians James E. McTeer II (Minnow) and Annie Spence (Dear Fahrenheit 451: Love and Heartbreak in the Stacks).

To learn more about the year-round educational programs of the Pat Conroy Literary Center, or to donate in support of this nonprofit, visit the Conroy Center in person at 308 Charles Street in Beaufort (Thursday–Sunday, noon to 4:00 p.m.) or online at www.patconroyliterarycenter.org.