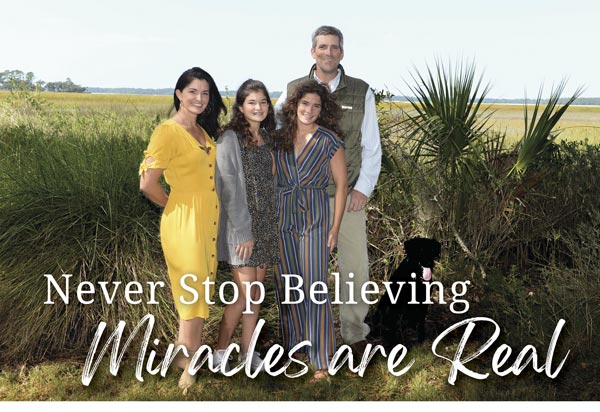 
One year ago, the Hilton Head community bore witness to a nightmare. Michael Perry, beloved fishing guide of Papa Bear Charters, was back home in Tennessee, visiting friends and family, when he suffered a horrible hunting accident. By medical reckoning, no one should have survived it. But the fact that he’s here telling us his story is, to him and many others, proof of the existence of miracles.

It was a darkening eve of rain turning to sleet—the perfect scenario for a late-fall bow hunt in Tennessee. Michael was on one of his annual pilgrimages, while his wife Sarah and their two young daughters held down the fort on Hilton Head. Michael was Sarah’s prom date in their little hometown of Paris, Tennessee, and he followed her to the Lowcountry when she came to SCAD 25 years ago. Despite never having fished saltwater before, this third-generation fishing guide was thrilled to make a life for himself here as a charter boat captain, while she got to be the artist and queen of the castle. But nobody could have foreseen the harrowing twist their lives would take as Michael hurried to reach his deer stand that night.

“In a mad rush, I left my safety harness in the truck,” Michael recalled, who grew up on a freshwater lake dock, cleaning fish every day after school. “As I started to climb the tree, I had a moment where I could either go back to the truck and get the harness, or climb up like I’d done a thousand times before. I chose to keep climbing, but as soon as I put my foot on the platform, the cables securing it to the tree just snapped.”

It’s doubtful that retrieving his harness would have changed the outcome, as he wouldn’t have had time to clip it in before the stand failed. But in any case, Michael plunged 25 feet straight down and was impaled by another tree that had been cut off to open a shooting lane. The 6” to 8” diameter trunk entered his front on the belt line and went all the way up his torso, breaking three back ribs under the shoulder blade without piercing skin on his back. He was stuck like that for two hours, on his tip-toes and barely able to support his weight, shifting from toe to toe in unspeakable pain. All alone with the temperature dropping, he felt himself fading out.

“It was that fight or flight scenario, and I chose to fight,” says Michael. “I was talking to God—yelling at Him—saying ‘You’re not going to take me yet! I can’t leave my family; I can’t leave my girls.’ Then I took a deep gasping breath and started coming around. I screamed NOOOO as loud as I could, and suddenly it was like this shower of warm golden light and comfort came over me. It was literally like someone hugging me and telling me everything’s going to be okay. From that moment on, I knew I was going to live.”

After thanking God, Michael snapped into the reality of what he needed to do to survive. Despite the isolation and lack of cell service, he managed to get a few broken calls and texts through to his friend. They cut down the tree with a little portable bucksaw so at least Michael was on the ground with the pressure taken off; but he still had 40-inches of tree in him. EMS did a heroic job getting him out of the woods on all-terrain vehicles, but helicopter flight was impossible due to inclement weather. Michael had to make the slow and excruciating journey by ambulance in snow, sleet and black ice to Vanderbilt University Medical Center in Nashville. Even with everything working against him, his confidence remained unshaken—seven hours with a tree hanging out of his stomach, yet he never went into shock, or lost consciousness until they put him under at the hospital.

“I get a little emotional talking about it because I feel like I called on God, and He answered,” said Michael, who shares his tale with anyone who wants to hear it, even strangers. “I don’t know what else He has planned for me, but I think there’s a positive meaning in this story. From a hunter’s standpoint, a lot of people (including myself) don’t go through every protocol to stay safe because it’s just extra work and a pain in the behind. So my message to hunters is to not cut corners—take every single safety precaution to heart and live it. To everyone else, I would say never give up. Have faith and always believe there is someone who can help you, whoever they may be. I’ve chosen God and Jesus Christ as my savior, and I felt His power.

So just trust—it may not be the outcome you want, but believe there is a reason. It’s too hard if you don’t believe.”

On a call to Sarah from the ambulance, Michael was able to transmit this reassurance. “His friend had called me when it first happened,” Sarah remembered, “but he couldn’t stop crying, and all he could get out was, ‘There’s been an accident, I’m so sorry.’ So I knew something had happened but I didn’t know what. When I talked to Michael he was so calm, so chill, it was almost like one of those ‘do you want me to pick up some bread from the grocery store’ type calls. He told me it was going to be okay, and that was all I needed to know.”

Michael went into emergency surgery and spent six days in a medically induced coma. He occupied bed No. 3 in the “fish bowl,” meaning he was the third gravest patient in the ICU at Vanderbilt, an institution they credit with saving his life. Seasoned trauma nurses were shocked he pulled through at all. “We didn’t understand what a miracle it was at first,” said Sarah, “until the nurses kept saying, ‘We don’t have a reason for him to be alive. It’s just a God thing—that’s what we call it here.”

And yet, as they’ve come to put it since then, “There’s no drive-through for miracles.” The journey of survival has been incredibly tough. Michael has undergone 10 surgeries and innumerable daily struggles, while his wife shoulders a load he wishes she never had to bear. Their daughters—Audrey, 15, and Olivia, 13—have grown up too fast, learning to dress wounds and flush PICC lines even as they keep up with school and athletics. They’ve shown exceptional strength and resilience fighting for the father they dearly love. But in spite of the humor and faith, with which the whole family has faced this ordeal, down days are inevitable. Michael has been through all the dark places of trauma, being half out of his mind on pain medications, and trying to make sense of his experience.

“Why am I alive and some people don’t make it?” he questions. “I’ve had a hard time with that, knowing there are people who deserve to live and don’t. That’s a real emotion. I called a very religious friend and said, ‘Okay, talk to me about this, pray with me. How am I ever going to repay this gift?’ He said, ‘Michael, you don’t have to repay this—it’s a gift from God. He has a plan for you, as long as you keep wanting to survive.”

Throughout his recovery, support from well-wishers has been crucial. The outpouring started at Vanderbilt, where people came from other floors just to meet “the tree guy.” It continued when they returned to Hilton Head and were embraced by a community ready to bolster them in any way possible. And it goes on even now, in the form of daily messages through Facebook and Instagram that buoy Michael’s spirits. “It’s hard to keep up the positive vibes in a lull,” he admitted, “but there’s no way I’m going to let everyone down by having a bad attitude.”

“We’ve seen the most immeasurable amount of kindness and generosity,” Sarah affirmed. “You’ve got to take the joy and love where you can get them, and it’s not always at the top. Like people say, oh, I have the top surgeon. But my coffee guy Omar brings me just as much joy. The guy at Subway tells me he made my Italian sub full of love and miracles—who does that? There’s so much goodness; we’ve been fortunate to see it every day and it lifts us up. Hilton Head has really been good to us.”