Perfect for the 4th! 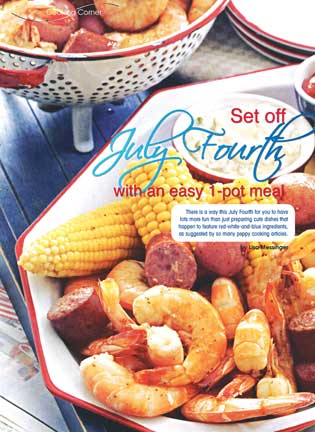 "Cooks simply turn out the ingredients on a table covered in newspaper. When everyone's finished eating, just roll up the paper and throw it out. It's a perfect paper plate meal."

Playing volleyball on the beach with your family would probably be more fun than slaving over such dishes, as would splashing in the pool or riding the Ferris wheel and roller coaster at your clan's favorite amusement park.
July Fourth spreads often consist of large buffets of homemade items that take lots of effort, as well as the obligatory red-white-and-blue themed recipes, however, what if you could combine lots of your favorite July Fourth ingredients in a single easy one-pot meal that's much more dazzling than those individual time robbers?

A "low-country boil," which shot to prominence in the low country (the coast
between Georgia's Savannah River north to Pawleys Island, S.C.) is just such a dream come true. It was served for the fi rst time publicly in South Carolina in the 1960s by National Guardsman (and later seafood company owner) Richard Gay, who was throwing together a quick dish of leftovers for 100 of his fellow guardsman. The dish (also at that time referred to as Frogmore Stew - where Gay was from in South Carolina and his family had made it at home for years - or Beaufort Stew - where he was stationed
in South Carolina) has become a legend enjoyed at millions of outings every summer.

There's good reason. The dish is a melange of fresh shrimp, potatoes, fresh corn on the cob, smoked sausage and plenty of Old Bay seasoning. Through the years, cooks at the beach where the stew is often prepared, also have added lobster, oysters, crab and crawfish. The recipe easily adapts from a yield for a small family to that of a large group, since every
ingredient is measured per person. "The rule of thumb here is the bigger the crowd, the bigger the pot," noted Coastal Living magazine, which covers that part of the country.

Even better than this being a one-pot recipe is that it also can be a no-dishes recipe. Often cooked outdoors over an open fl ame, when it's ready, cooks simply turn out the ingredients on a table covered in newspaper. When everyone's fi nished eating, simply roll up the paper and throw it out. It's a perfect paper plate meal, with a fork being the only utensil needed.

Famed Georgia low-country gal Paula Deen, star of the TV Food Network, awardwinning Savannah restaurateur and best-selling cookbook author, is so enamored of the dish she makes it all summer long and featured it as the July offering in her popular recipe calendar book and rightly calls it more of a "technique than a recipe." Her directions that follow here are just like Gay's famous original version. And then - talk about a gourmet, but still easy, variation - Bon Appetit's version includes mussels, lobsters (cooked briefl y in their own pot) and lots of pale ale.

Lisa Messinger is a first-place winner in food writing from the Association of Food Journalists and the author of seven food books, including "Mrs. Cubbison's Best Stuffing Cookbook" and "The Sourdough Bread Bowl Cookbook".

Fill large pot with enough water to cover all ingredients.
Add sausage and Old Bay seasoning and allow to boil for about 20
minutes so that sausage can fl avor water. Carefully taste for seasoning;
add more Old Bay if desired.

Add potatoes and boil for about 15 minutes. Add corn and boil for
about 10 minutes. Finally, add shrimp and allow to cook for 3 minutes.
Carefully taste a shrimp and, if cooked through, drain immediately
and serve on oversized platter or, as many Lowcountry families do, on
a table covered with newspaper. Serve with tartar and cocktail sauces.

Meanwhile, drop lobsters headfi rst into pot of salted boiling water;
cover. Boil until cooked through and shells turn bright red, about 13
minutes. Using tongs, remove lobsters from pot. Split in 1/2 lengthwise.
With utensil, carefully remove corn, fennel, onions, potatoes and
mussels from pot (discard any mussels that fail to open). Divide among
6 large bowls. Place 1/2 lobster atop mixture in each bowl. Season
broth with salt and pepper; pour over seafood and vegetables. Serve
with melted butter and lemons. Also good with mayonnaise that's
been combined with fresh herbs and lemon juice.