HomeFeatures6 Tips to Help You Be a Most Awesome Mother-in Law!

My Journey Back to Health 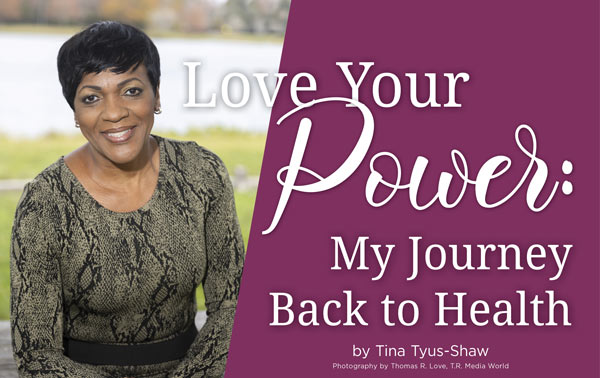 When I was a child growing up in Griffin, Georgia, I was tall with a thin frame. I loved playing outside and never turned down the opportunity to show my athleticism during pick up games of kickball, basketball, football, dodgeball, or jump rope with my friends from the neighborhood. How much I weighed was the last thing on my mind, but as I became a teenager, my boyish frame sometimes landed me at the brunt of jokes by the “pretty girls,” who had hour-glass figures that caught the attention of all the guys at school. However, I found a way to use my scrawny build to my advantage. I became a runner on my high school track team. The 400-meter race became my hideaway from my body-shaming critics, who were silenced when I was victorious.

After college going out into the work world, I learned to accept my slim build simply as who I was. And although there were things about my body I didn’t like, I worked around the imperfections, and instead, concentrated on things I saw as my strengths…my hair, smile and stride were signature “Tina Tyus!”

On the anchor desk, the cameras alway add about ten pounds. I bought my on-air suits and dresses from department store racks and had a master seamstress take in the extra material in all the right places so I had a dapper fit. I was a young reporter on the move, and back in the ‘80s, thin was in; I got little resistance from colleagues, bosses, or audiences about how skinny I was. But, there was always a small voice whispering to me that I wasn’t good enough, or pretty enough because I was “skinny.”  For years I attempted to ignore those negative thoughts, and managed to ward off the negative vibes to get my job done and make it in the television news business. When WSAV-TV in Savannah came calling, I was all too thrilled to accept the offer.  Little did I know that making the move would not only advance my profession, it would lead me straight to my love, James Shaw.
After we got married, I quickly began turning my attention to being a good wife while holding down my career. James never demanded I be the type of wife who had dinner on the table every night, or that I “spit-shined” every corner of the house, but I wanted to be all of that.  I guess you could say it was my fairy tale. I became pregnant with twins and immediately felt my body changing. For the most part, it was a healthy pregnancy. I gained the proverbial baby-weight, and for the first time, I had a “full” figure that I liked. But my world and life were ripped apart when my twin boys both died at birth. Regaining my consciousness after an emergency delivery, I barely opened my eyes, and just beyond the anesthesia-induced haze, I could see my husband, teary-eyed, sitting beside my bed.  He broke the news that made me want to die. Something went horribly wrong, and we wouldn’t be taking our babies home with us.

Our miracle baby-girl, Celine, came almost a year later to the date. We were both so happy to have our new baby. We smothered her with lots of love and attention, while continuing to mourn the loss of our boys. With marriage, three births, the loss of two babies, and a new baby to take care of,  I instantly became overwhelmed. My postpartum body, while still relatively young, was starting to show signs of fatigue, bloating, pain and weight gain. Even more overbearing than the physical toll were the mental and emotional crosses I had to bear. I had too much to be grateful for; my beautiful Celine, a husband who loved us and shared in my grief, and a work family at WSAV who supported me through it all, providing me with the love and space I needed to grieve and recover. But something was still out of balance. Eating became my emotional crutch. I ate all kinds of unhealthy foods. Fried foods, sugary foods, fast foods were daily staples for me. As a working mother of an active child, drive-thrus became the norm. James was up every morning at the crack of dawn to go teach his cadets at the high school where he was a ROTC instructor. He got his workouts in most days. As for me, I rarely moved, except to make an early morning hair appointment to get me camera-ready for the newscast. 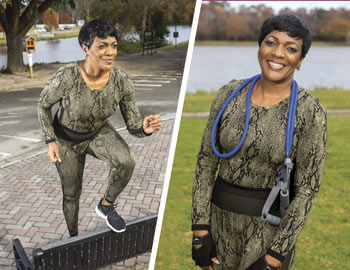 The pounds were creeping on. Not only could I see it, I could feel it.  At my highest weight, I tipped the scales at nearly 180 pounds in 2018. My reality check came one day when I was on the set, and out of the corner of my eye, I noticed the extra weight I was carrying  around my waist line. I was devastated to the point of tears. I confided to a good friend that I had let myself go, and I needed to find my way back to the “powerful Tina” I knew was deep inside of me.

I made an important decision. I set my mind to becoming a more powerful me. I started by adopting new eating habits. Instead of hamburgers and french fries, I favored salads and healthy wraps. Instead of sugary drinks and sodas, I chose water. With a little discipline just on the eating side, I started to see rapid results. Desiring to take my weight loss journey to a higher level, I hired a personal trainer, and we got down to work. Exercise was my least favorite thing to do, but the thought of being accountable on a daily basis motivated me. I began to feel empowered. If you had asked me 20 years ago if I would be the one who actually LOVED working out, my answer would have been a resounding “NO”.

Again, all it took to begin was a made up mind and just enough courage to take the first baby step.
There were days when I wobbled, and fell down, just like a baby, but I got back up and started again. It wasn’t long before I gave myself permission to be human, faults and all, and I started making my weight loss journey about more than just losing the weight. I made a commitment to LOVE MY POWER. I made my health a priority. I meditated and affirmed myself; raising my deserve-level. Subsequently, confidence followed and fueled a passion like none other. I listened to the positive voices within me that reassured me that I could accomplish any and everything I set out to do.

If I can impart any wisdom to your soul, it is to remain positive, and trust the process of your wellness journey. Having a positive mind and positive vision creates positive energy. It is critical to stay focused on yourself and your God-given promise to possess power. The scripture confirms that: “For God has not given us the spirit of fear, but of POWER and of love, and of sound mind…” (2 Timothy 1:7)

Many women tend to put themselves dead last in the hierarchy of life. They say there’s not enough time in the day. Trust me when I tell you, there is enough time for YOU. You CAN create time and space for yourself. In fact, you MUST. Take a 15 minute walk, or how about a hot shower, away from the frenzy of family? Get in the car by yourself and just meditate, then take a drive around the block. It’s all a part of your willingness to POWER YOUR LIFE. Things won’t turn around overnight, but stay the course and you will see change. By doing these simple things, you create a life of love for a better you. If I can do it, so can you! 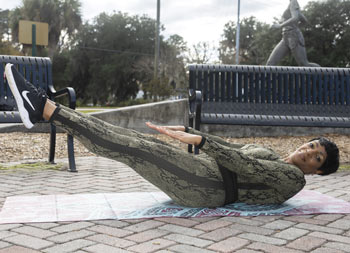