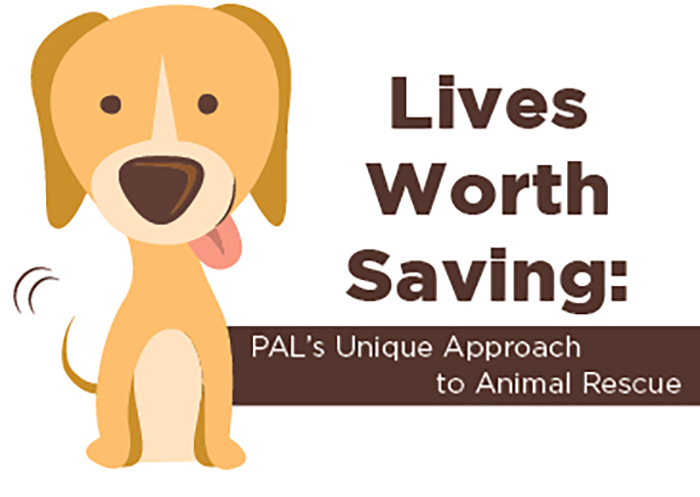 On a chilly morning last fall, a good Samaritan found a 5-week-old kitten unable to stand or even lift her head. Vets at the Palmetto Animal League Community Clinic in Okatie could find no underlying cause for the kitten’s paralysis. Staff members fed her with an eyedropper, but she showed no signs of improvement and they feared the worst.

As a last effort, they moved the tiny kitten—who they named Callalily –  into a foster home, and that’s when things began to change. In the loving presence of her foster mother, Callalily walked for the first time. The only lingering evidence she endured such a rough start is a cute little head tilt.

“I founded Palmetto Animal League (PAL) six years ago for one reason – to save more lives,” said PAL founder and president Amy Campanini. “In my line of work, I see countless traumatic beginnings, like Callalily’s, but I also bear witness to the very best humanity has to offer.”

According to Amy, within the four walls of PAL’s Adoption Center, you find a spirit of wholehearted, unconditional love from staff and volunteers.

“Our compassionate team makes a renewed promise every day—we never give up on a pet,” she said. “These are lives worth saving.”

In order to support its ”no-kill” rescue mission, PAL recently launched an aggressive campaign to save 1,000 lives this year.

The non-profit rescue is reaching out to the community to participate in its “1000 Lives Worth Saving” campaign by donating as little as $9 a month—or a one-time gift of $99 – to save a pet (although donations of any size are gratefully accepted and used to save lives).

PAL took the campaign one step further last month, by asking people to help spread the word by visiting the Adoption Center to take a few photos with a pet, then post those photos on social media asking friends and family to donate.
“We had dozens of folks in the community, including several local celebrities, agree to participate,” said Amy. “The power of social media has been overwhelming. Photos of our adoptable animals are all over Facebook and we have received donations and inquiries about adoptions from all over the country.”

But they still need more
“Every dollar we receive—and every animal who is adopted—makes it possible for us to save yet another life,” she said.
While donations are crucial to the organization, which receives no government funding, there are several other ways folks can help PAL reach its goal of saving 1000 lives.

Adopt – Many people find the love of their life at the PAL Adoption Center, located in Okatie’s Riverwalk Business Park, which serves as a temporary residence for approximately 200 dogs and cats while they wait to find a loving home.
Foster – Loving foster families make rescue a reality, as PAL can only save one life at a time at the Adoption Center. But each time a foster family accepts a pet into their home, another animal can be saved.
Volunteer – Whether snuggling with a puppy, planning fundraising events or working in the Thrift Store, PAL can always use an extra set of hands.