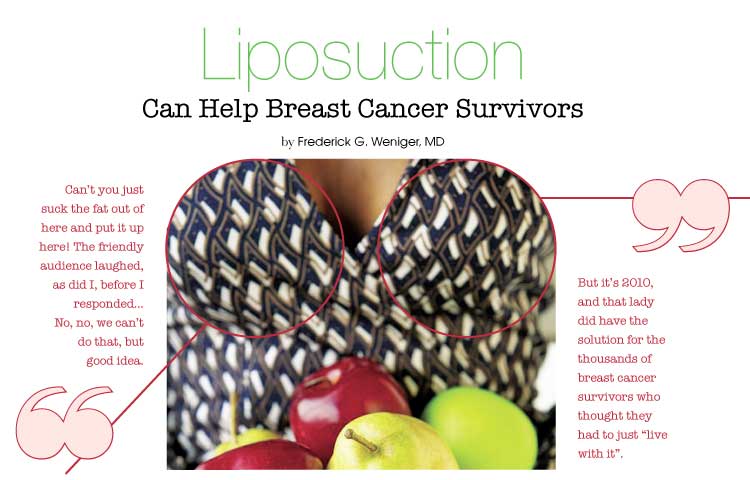 Breast Cancer gets a lot of attention, as it should. It is the most common non-skin cancer, and the second leading cause of cancer death. It is the leading overall cause of death for women ages 40-55. One in eight women in the U.S. will develop breast cancer in her lifetime.

The well-earned notoriety (or infamy) of this disease has been associated with a good bit of media exposure and imagery. In fact, how many diseases have a symbol as well-recognized as the Pink Ribbon? Or photos of girls, mothers, and grandmothers embracing? And mastectomy defects. That's right, photos of mastectomy defects. In fact, I recently saw a calendar that featured a different photo each month of a woman after the surgical removal of one or both of her breasts.

Well, if the goal is to get people's attention, that should do it. If we want to graphically frighten women of all ages to get their mammograms, those images might work. In fact, if we want to portray the fear that a great many women face as they realize that they have a breast mass, I would even argue that those mastectomy images might hit home.

But if we are trying to accurately represent the realistic physical and aesthetic challenges that most breast cancer survivors face, then the mastectomy defects show only a small part of the problem. In reality, the vast majority of breast cancer patients will never have a mastectomy defect because the vast majority of women choose breast conservation therapy (lumpectomy and radiation treatments) instead of mastectomy.

Unfortunately, the name "breast conservation therapy" may be a bit euphemistic, since up to 20% of patients who chose this option end up with significant cosmetic deformities of the breast. Many of these women end up after lumpectomy and radiation with unacceptable breast asymmetries, breast shapes, shrunken breast size, and divot-appearing depressions in the location of the lumpectomy. Simply because of the tremendous number of women who undergo breast conservation therapy, the number of patients who suffer from these deformities is significant.

Until now, this "silent majority" has gotten little attention, or "imagery", in the media. I am not aware of any post-lumpectomy defect calendars. Yet the group of breast cancer survivors affected by this problem is likely far larger than the number of patients facing actual mastectomy. One of the reasons that such patients have not received much help from the medical community is that not many attractive options exist to help these post-lumpectomy issues. Often, only smaller versions of full-scale breast reconstruction operations (flap procedures actually designed to recreate an entire breast) were possible. Such large operations with long or difficult recoveries were often deemed too drastic for "only" a lumpectomy defect. Patients were sometimes told, "You should be happy the cancer is gone." And maybe they should.

But now the same patients can also be happy that there exists a very simple, one hour, outpatient operation to help this extremely prevalent problem. Believe it or not, fat can be suctioned out of other areas of the body and then injected into the breast, where it can survive permanently. That's right, fat can be grafted from "there" to "here", including the breast. And for breast cancer reconstructions, including lumpectomy deformities, this is no longer experimental! Just as we can take some fat from the hips and graft (inject) it into the cheeks or lips, fat can be injected into the breast, too. Just like fat can be suctioned out of the tummy and waist, and placed into the buttocks (a.k.a. the "Brazilian butt-lift"), it can be used to fill in breast defects or even add volume to the entire breast. What's most amazing is that this is done with little-to-no pain or downtime, as a quick outpatient procedure, and with tissue (fat) that most women would not mind losing anyway!

At a recent seminar, I briefly talked about this and someone in the audience asked if I didn't think that this was amazing. I chuckled, and my mind flashed back to a talk I gave about seven years ago in Pittsburgh. A woman there stood up and enthusiastically suggested, "Can't you just suck the fat out of here (her hips) and put it up here (her breasts)!" The friendly audience laughed, as did I, before I responded. "No, no, we can't do that, but good idea." But it's 2010, and that lady did have the solution for the thousands of breast cancer survivors who thought they had to just "live with it".

I have to agree with the student in the OR today who said, "You guys do some really cool stuff!" Yes, we do some amazing, dramatic surgery. But there are few things we can do that are as elegant as helping so many women overcome their breast cancer deformities with small surgeries, minimal risk and minimal downtime, by using their own spare parts. Think of it as "green surgery" for the new decade.

Dr. Frederick G. Weniger is a third generation physician, Board-Certified plastic surgeon and member of the American Society of Plastic Surgeons.  A graduate of Notre Dame and University of Pittsburgh School of Medicine, his practice specializes in cosmetic plastic surgery of the face, breast and body. He can be reached by calling (843)757-0123 or log onto www.wenigerplasticsurgery.com.