Re-circulate your treasures and keep your memories

"I was afraid to let go.
As it turned out, the idea of getting
rid of them was harder than actually doing it. " 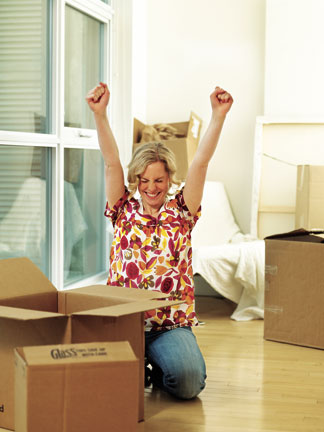 During one of my moves years ago I found a box full of memories. We moved a lot as a family so we spent way too much time in the car. So to ease the boredom of truck stops, my brother and I would have a two-tiered contest. Who ever returned back to the car first and with the most tourist brochures, won. We counted them, but we didn't look at them. We didn't intend to. It was just fun. Somehow, after all of those years and moves, I held onto a box of those precious brochures. I just couldn't let them go because, to me, they were a part of my happy childhood. I was afraid that without them as a reminder, the memories of riding and goofing off across America might escape me. I was afraid to let go. As it turned out, the idea of getting rid of them was harder than actually doing it. I realized that I have the stories and that is all I wanted in the first place.

I used to get so tired of moving the same box, only to never open it. So, I started opening the boxes, and in them I found everything from broken china to rocks (of course the rocks were on top!). I knew the china would never fix itself and that I would never remember where the rocks came from. But to get rid of it all seemed to disregard their significance. The rocks were collected in thoughtful moments wandering the beaches of wherever and the china belonged to my grandmother. How in the world could I just throw it away? I didn't think anyone would want it, but to throw it in the garbage seemed wasteful and wrong.

Now, I look at my "stuff" more critically. I decided it was becoming necessary to think a little differently about this dilemma.  So I came up with the idea of re-circulating my treasures. If I "toss" them back into the universe, their purpose lives on and they can still be enjoyed.  So I decided to try it. I salvaged two coffee cups and saucers from the china, which I use, and donated the broken chards to an art center to use for mosaic work. I took myself to the beach for the day and I skipped those rocks over the water right back into the ocean from where they might have come. Not only was it fun, but it also helped to release the hold I had on my own memory bank. It was almost as though my stories were all locked up in those boxes and the only way to remember them was to see those things. By re-circulating them, I was allowing myself to acknowledge their significance in my life and honor them by letting them live on for someone else.

All it takes is one visit to a second-hand store to see that we as a culture have been passing on our treasures for as long as we have existed. Not only is it exciting to think of what is out there, but it is also preserving our culture as well. Your great grandmother doesn't want her china in a box getting broken. She would be appalled and devastated. She wants it to be enjoyed and respected. The best thing would be to pass it on within the family for future generations. If there is no interest, try selling it: consignment store, antiques store, Ebay, Craigslist, etc. Try to think creatively. Ask yourself, "Who could really put this precious treasure to the best use?" Donate it to a charity and know that someone is going to find a use for it. Once you finally release it, you also are relieved of the inevitable guilt you had felt for not being able to care for it the way it should have been.

In addition, we obviously all have things that do not conjure up stories or remind us of anything. These things should be much easier to part with. The key is to remember that "stuff" is made to use or enjoy, it is not designed to be kept in cardboard boxes or unopened cabinets.

Let go of the notion that our possessions tell our stories. Determine what is truly special or useful, find a good place for it in your home, and get rid of the rest. By doing so, you are making space for new stories and memories.


Stella-Lee Anderson is a local Master Organizer and owner of Nitty Gritty Spatial Organizing. She can be reached via email at This email address is being protected from spambots. You need JavaScript enabled to view it. or call (843) 298-2280 mobile. To learn more log onto www.nittygrittyorganizing.net