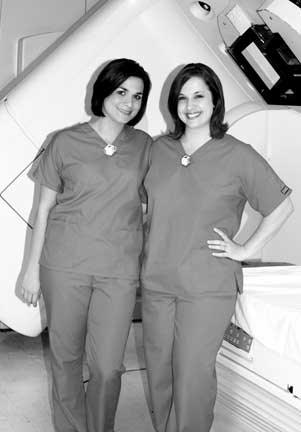 Almost in unison, they explained that their goal is to "treat
each of our patients like a well-loved family member."
Having similar experiences growing up, both
women lost loved ones to cancer. When at 18, her
grandmother died from cancer, Kelly - who felt helpless because
she was away, attending college - determined that she would
dedicate her career to helping those who battle the disease.

Alex had both a grandmother and uncle who fought cancer,
and remembers her grandmother speaking of the radiation
therapists that she had with such affection, leaving an indelible
impression on Alex, shaping her future career path.

The practice where this dynamic duo works sees approximately
30 patients a day, with the duration of therapy from two to nine
weeks. During that time, there is a trust built and a relationship
formed, established on a mutual goal of healing.

Radiation therapy, a localized treatment, involves a triangulation
of lasers which hone in on the treatment area while the patient
lies still on a movable, high-tech table. High-energy rays are then
used to damage cancer cells, stopping them from growing and
dividing, while minimizing damage to nearby healthy cells.

After getting the patient situated and adjusting the lasers
precisely, Kelly and Alex administer the radiation from the
adjoining room, able to communicate with and observe the
patient via an intercom and camera system.

Bonnie Allen, office coordinator, can't talk about Kelly and
Alex and their gifts to these patients without tearing up. "These
girls really care..a patient might be quiet and worried coming
in for their appointment, but, when they leave the office, they are
smiling or crying with gratitude. Alex and Kelly really take the
time to get to know each patient, put them at ease and explain
every step to them...they become like family. I call these girls
'angels,' and they are."

In addition to being co-workers, Kelly and Alex are great
friends beyond the office walls, even celebrating Kelly's 30th
birthday with a skydiving expedition. They started working at
the Hilton Head office simultaneously, four and a half years
ago, even beginning as roommates, which proved for a little too
much togetherness.

Alex said, "We'd get to work and wouldn't have much to talk
about!" Kelly, who is now married, agrees, "It works much better
now. We love to come in and rehash reality TV shows, and
whatever else comes up!"

When a patient completes the course of radiation treatment, the
team holds a small graduation ceremony for him or her, complete
with a diploma and the playing of "Pomp and Circumstance."

Kelly explains that it is "an extremely emotional time, because
usually the patient is not only finished with treatment here, but
because radiation therapy can be the final treatment for cancer,
after chemotherapy or surgery -- it is a very real "graduation,"
from the disease and, hopefully, into a full, healthy life."

Because these patients come to consider Alex and Kelly family
and vice versa, more than one has finished treatment, saying,
"I'm not going to miss lying on that table, but I certainly will
miss you two." Needless to say, tears and hugs accompany the
intimate and touching graduation ceremony, an apt metaphor
for the journey of healing that has been taken together.