HomeFeaturesVirtually Everyone Can Try This Tri! 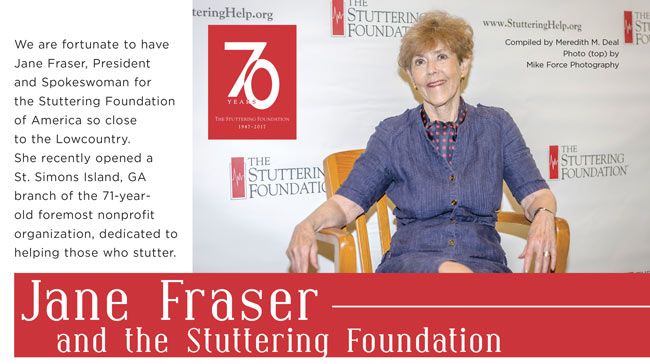 We are fortunate to have Jane Fraser, President and Spokeswoman for the Stuttering Foundation of America so close to the Lowcountry. She recently opened a St. Simons Island, GA branch of the 71-year-old foremost nonprofit organization, dedicated to helping those who stutter.

Focused on basic research, causes, treatment, and prevention for nearly three million people world-wide who struggle daily with this complex disorder, Jane shared the foundation’s simple goal, “To provide effective and accurate materials, up-to-date training, and hope to those who stutter, their families, and the dedicated therapists who help them.”

Jane has co-authored numerous foundation publications, served with many educational affiliates, such as the Michael Palin Centre based in London, England, and widely considered one of the premier treatment centers in the world for childhood stuttering, and received an honorary fellowship from the Royal College of Speech & Language Therapists. She is the daughter of the Stuttering Foundation of America’s founder, Malcolm Fraser, a successful Memphis, Tennessee businessman and stutterer, who dreaded public speaking. In 1947, Mr. Fraser established and endowed the nonprofit organization.

“My father was inspired by the story of King George VI, who also dreaded pubic speaking due to his stuttering disorder.” Praising the 2010 premiere of The King’s Speech, Jane remarked, “this movie has introduced a new generation of young people to the King’s inspiring story. A powerful role model, his broadcasts of hope kept the spirits of the British people alive during the dark days of World War II.”
The foundation’s website (www.stutteringhelp.org) includes a streaming video library, 67-video YouTube Channel, and a vast list of reading materials. They also support research into the causes of stuttering, which has a proven biological cause and can be treated.

“Stuttering usually begins at a young age,” Jane explained. “When teachers hear a child begin to stutter, the immediate reaction is one of concern, mixed with a host of urgent questions: Should they tell the child to slow down and relax? Should they complete words for the child? Should they expect the same quality and quantity of work from this student?

“Young children are busily learning to talk. As such, they may make speech ‘mistakes,’ such as effortless repetitions and prolonging of sounds. In most instances, this is very normal. If parents and teachers listen to and answer these young children in a patient, calm, unemotional way, the child’s speech will probably return to normal.

“Some children, however, will go beyond the norm and begin to repeat and prolong sounds markedly. They may begin to struggle, tense up, and become frustrated in their efforts to talk. These children need help.

“Teachers concerned about a child’s fluency should consult the school speech therapist, as well as the parents, to make sure their approach to the child’s speech is consistent.  It’s always good to talk privately with the child to reassure them of your support; let them know your awareness of their stuttering, that you accept it —and them.”

2. Don’t complete words for the student, or talk for him or her.

3. Help all members of the class learn to take turns talking and listening.
All students—and especially those who stutter—find it much easier to talk when there are few interruptions and they have the listener’s attention.

4. Expect the same quality and quantity of work from
the student who stutters as the one who doesn’t.

5. Speak with the student in an unhurried way, pausing frequently.

6. Convey that you are listening to the content of the message, not how it is said.

7. Have a one-on-one conversation with the student who stutters about needed accommodations in the classroom. Respect the student’s
needs, but do not be enabling.

8. Don’t make stuttering something to be ashamed of. Talk about stuttering just like any other matter.
Compiled by Lisa Scott, Ph.D., The Florida State University

• One million+ Americans have a stuttering disorder.

• Approximately five percent of children go through a period of stuttering lasting six-months or more. Three-quarters recover by late childhood, leaving one percent with a long-term problem.

• Studies show people who stutter are as intelligent and well-adjusted as those who do not. 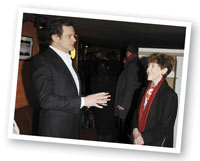 • Jane met with Colin Firth at the 2010 London premiere of The King’s Speech (38 total motion-picture awards, including Best Actor Oscar and Golden Globe for Mr. Firth)

The Stuttering Foundation: provides a toll-free helpline— 800-992-9392—and free online resources at: www.StutteringHelp.org, including services, referrals, a list of speech-language therapists, support to people who stutter and their families, as well as support for research into stuttering causes.