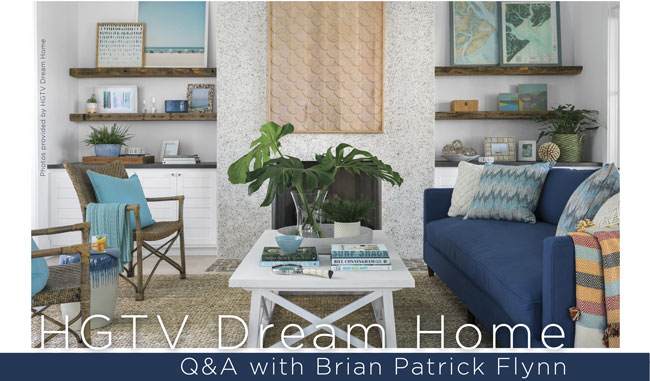 If you know HGTV, then you certainly know the buzz around the Lowcountry: The home for HGTV’s Dream Home Giveaway 2020 is in our very own backyard! We had an opportunity to peruse the newly built and fully decked out home inside Windmill Harbour on Hilton Head to get the inside information from interior designer Brian Patrick Flynn himself! This is Brian’s fifth year designing the HGTV Dream Home. In addition, he is the interior designer for HGTV’s annual Urban Oasis project, and has a full service production company of his own, FlynnsideOut Productions.

Q: What is the style and look of the home? Where did it come from?
Brian: The HGTV dream home is geared to be someone’s forever home. The one thing I did want to stick with throughout is the idea of coastal, so blue and white are a natural. It just makes sense here. But I wanted to experiment with color, so as you make your way from downstairs to upstairs, you’ll see really intense coastal colors. The green is not your average green; it’s much more tropical, like what you’ll find in Florida, or in Charleston. The aqua you see reminds you more of Miami Beach and Key West. The idea was to play with all coastal styles and create a much more transitional look.

Q: It seems like there’s a trend of simple living in this house.
Brian: Yes! Definitely. People are going towards minimalism. A lot of what we had in the 2000s was maximalism, where people loved stuff and had a lot of stuff, but I think it’s a trend that switches back and forth. Currently, people are just spending on the one or two things that are important in the room and foregoing anything else. Architecture has become a big thing for the younger generation; nobody wants to move into a regular square or rectangular box. Rather than something with a lot of space, the newer trend is to have something with character, and to use the space better.

Q: How much do you view these dream houses as a chance to experiment a little bit?
Brian: That’s a good question! Yes we can take some risks, but we don’t experiment all that much. The most important thing is that we want some lucky person to actually win this house. If each room was really out there, it would narrow our audience. There is a really fine line between pushing the envelope and sticking with what works. I work with all of our partners and they have specific things they want to see in the house, as well. It’s like playing a puzzle all the way until the very last flower is put in the last place.

Q: What three colors here are your absolute favorites?
Brian: White is definitely one of them, as can be seen throughout the house. The aqua in the upstairs bedroom, as well. I use aqua a lot. The exterior color of the house— blue gray—is my most used color. It’s super neutral and goes with everything and everyone. It’s never too much, or too little color. It’s just right.

Q: These colors really make a statement!
Brian: They're actually new! These colors are a brand new collection by HGTV called the Color of the Year palette. They’re made specifically for HGTV by Sherwin Williams so they don’t really exist anywhere else.

Q: Speaking of gray, there are blue grays, warm grays, yellow-tone grays, and purple grays. How would you guide someone to pick out a gray? Where do you start?
Brian:  I think the one rule for gray is that the only gray you don’t want to get—and this is a weird answer—is garbage can gray. Go to a home improvement store and look at their garbage cans; you don’t want that color! That color was made for that plastic trash can to fade away into the background and have no personality. When people think of gray and think of drab, it’s because they’re thinking of garbage can gray.

In choosing gray, go with either the charcoal family, meaning you’re using a lot of dark and black undertones, or go dove gray which has a lot of white. That way, you’re making a statement, and it’s still neutral either way.

Stereotypically, one of the colors on the spectrum that goes well with gray is purple. You put it next to any gray on the spectrum, and it works fine! The first house that I did was all gray and violet, so I never used purple after that! I was purpled-out.

Whites are actually the same way; they take on the undertone of everything else inside—and outside—of the house. It’s one of the things people don’t think of when they put white on their wall and suddenly wonder why it looks green! It has everything to do with what’s going on outside the window because you have a color influence of all the nature around you. 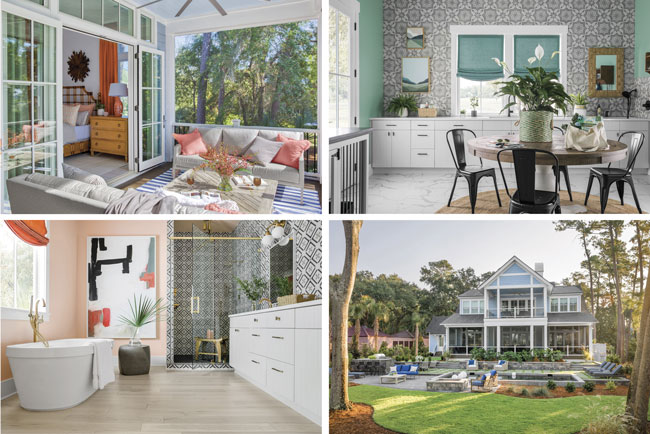 Q: Why do the ceilings match the room in color?
Brian: Generally, we paint the ceilings the same color as the walls. Why? Well, one of the things most people don’t pay attention to when they buy a house is that there’s more drywall space on the ceiling than on the wall because almost every wall has a window or door, so when you leave the ceiling white, your eyes go to see the ceiling, which is great if you want it to be the star!

Q: Since everyone can’t win the dream home, do you have any tips on ways people can freshen up their own homes?
Brian: First is that if you look at every piece of furniture in the house, almost each piece can be used in another room. There’s nothing in this house that is 100 percent just for that space; everything is meant so that it can be moved around. When choosing furniture, keep in mind you will one day get bored, and you want to be able to make the space seem new without spending a lot.
Second is the color of the exterior. A lot of times, people tend to be weary and want to go neutral, but blue gray or green gray are also now considered neutral. People try to stay safe with beige, gray, and cream, but for the same amount of money spent, you can get a really washed-out blue or washed-out green. All of a sudden, the house has more personality!

Q: One of the things I noticed is the mixing and matching of different tiles. That’s a risk people wouldn’t normally take.
Brian: Some people have noticed the tiles and some people haven’t, which is actually a really good thing. That’s the whole point when it comes to art-scaping the house, it suits everyone. When you go upstairs, you notice that one of the bathrooms has a very simple elongated tile. But it’s installed in a Herringbone style. That’s a lesson right there: You can make a big impact without crazy commitment by taking a tile and laying it differently. Conversely, the other bathroom has the super long tile in the deep shade of navy, which is more risky.

When you go into the master bedroom, which is gigantic, by the way, it has a dual effect. When you walk into the room, from your vantage point the first thing you see is the soaking tub and the natural light, so the blush walls help keep the focus on the tub. When you turn right and look at the master-closet sized shower, your focus goes towards the vibrant tiles, which is what I wanted. One area is meant to be more restful, and the other is meant for taking a shower, playing your music, and getting to work—two dynamics in one.

Q: What’s the newest trend you’re in love with?
Brian: I just love this idea of simplicity. I love the younger generation going more minimal: buy the right sofa, the right light fixture, a really good piece of art, and just let the architectural integrity of the house speak for itself. I think that’s the key to spending money on a house and keeping it forever. It doesn’t have to be the biggest house, but it’s sustainable.

You can Follow Brian Patrick Flynn on Instagram @FlynnsideOut.
The HGTV Dream Home 2020 Giveaway ends on February 19, 2020 at 5 p.m. ET. For more details about the home and how to enter to win, visit www.hgtv.com/design/hgtv-dream-home.