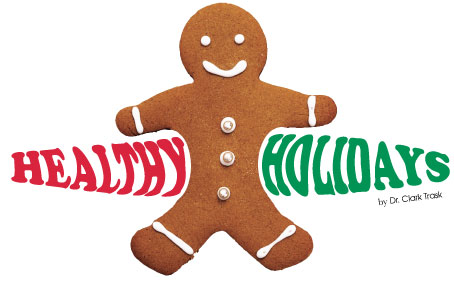 The average American gains one-to-two pounds during the Thanksgiving and Christmas holiday season. This gain may not seem like a lot (though 10% of Americans gain more than five-pounds during this time!), but for most, this weight is not lost during the remainder of the year.  Year after year, this one-to-two pound gain eventually adds up to ten, twenty, even thirty pounds of extra girth.

Weight gain is easy this time of year due to the barrage of calorie-dense foods and the endless opportunity for reflexive eating. The calorie density of food is the amount of calories that a given portion of food contains. Foods high in fat and sugar hold lots of calories, so instead fill up on lower calorie-dense foods such as fruits and vegetables.

Reflexive eating is the mindless nibbling and grazing that occurs when food is present at every turn. Those holiday cakes and cookies, cheese straws and salted nuts, delicious desserts and abundant leftovers may not be on your planned daily palate, but they make it down your gullet nevertheless. Reflexive eating is eating what is in front of you without thinking about it. It is instinctual, requires little effort, and is no different from a dog jumping at a piece of raw meat. It is in contrast to reflective eating which requires more thought and planning.

There will be times when you just won't have good choices to make, so a little reflective eating can save the day. One tool is to drink at least 16 ounces of water a half hour before meals. A 10-week weight loss study showed that all other things being equal, the group that drank 16 ounces of water prior to meals lost five more pounds in 10 weeks. Another tip is to "spoil your dinner" prior to going out. Eat a healthy late afternoon snack to help keep your hunger down for those evening calories.

The holidays can also be a time of great stress for families and individuals. Food is often the easiest method to cope with stress, so working on healthier coping methods can avoid the guilt and weight gain associated with stress eating. One of the healthiest ways to deal with stress is exercise, yet fewer than five-percent of Americans get adequate exercise. Use some of the extra time during the holidays to go for a walk, organize a game of flag football with family members, go dancing or do anything else that gets your body moving. Other stress relievers might include getting a massage, meditating or deep breathing. Remember, sleep deprivation compounds the effects of stress. Shoot for eight-hours a night and take naps during the holidays if you are suffering from chronic sleep deprivation.

Finally, different foods require different amounts of energy to be digested. If you go through the buffet line and have your blood drawn two hours later, there won't be small pieces of turkey, stuffing and cranberries coursing through your veins. Rather, those foods will have been broken down to molecules of fat, carbohydrates and protein small enough to be absorbed through your small intestines. The energy needed to digest food is called the Thermic Effect of Food. To digest 100 calories of fat, your body burns about 3 calories, leaving 97 calories in your body to be used or stored as fat. It takes approximately eight calories to burn 100 calories of carbohydrates, while it takes almost 30 calories to digest 100 calories of protein. Thus, filling up on more protein (turkey, shrimp, oysters, etc.) gets your metabolic fire burning and leaves fewer calories absorbed to be turned into fat!

Food and the holidays go hand in hand. Use some of the above tips to keep that fat on the table and off your waistline. As Henry Ford said, "Whether you think you can, or you can't, you are right."


Dr. Clark Trask is Board Certified by both the American Board of Family Medicine and American Board of Bariatric Medicine. He grew up on St. Helena Island and has practiced medicine in Alaska, Napal, New Zealand and Asheville, N.C. prior to returning to Beaufort with his family. He practices family medicine and weight loss medicine at his office on Ribaut Road across from Beaufort Memorial Hospital.