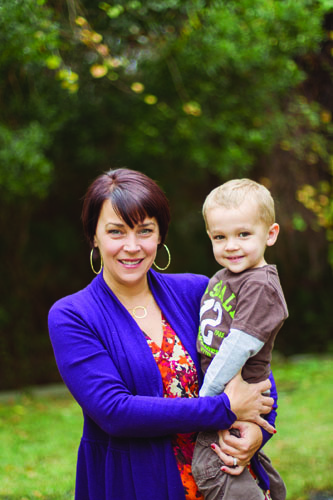 Christine McElroy has a story to tell. And it’s not your typical baby delivery tale, comparing notes with other mothers who have lived through the agony of labor. Christine has a harrowing story. When delivering her first child, almost three years ago, she nearly died when her uterus tore, resulting in severe internal bleeding that required emergency surgery.

Through her faith in God, a loving family, a medical staff she describes as “amazing,” and the largesse of the Blood Alliance, Christine made a full recovery. Today, she and her husband, Jared McElroy, are the parents of two sons, Reese, who will turn three in February, and Holden, who is 10-months-old. “I don’t remember a whole lot about the day my son (Reese) was born,” Christine said, shifting back to Feb. 4, 2011. “When I woke up, I was on a ventilator in the ICU and I had no idea I had a baby.”

Delivery day started out routinely for the Bluffton couple. Because the baby was on the large side—weighing 8 pounds—Christine was induced on her due date. After three hours of pushing, Reese turned over into a bad position for delivery. When the baby’s heart rate started to drop, the doctor resorted to performing a Caesarean section. During the procedure, a tear in the back of Christine’s uterus was discovered.

Surgery was performed, however, everything was not fine. “I wasn’t feeling well toward the end of surgery, Christine recounted. “I was cold and shaking, and I wasn’t sure if that’s normal or not.” Within the hour of delivering, drifting in and out of consciousness, Christine’s hemoglobin levels decelerated because she was bleeding internally due to a rupture in one of the arteries in her uterus. The artery was successfully repaired in a second surgery, but the ordeal amounted to more than a week in the hospital for the first-time mom, who described her recovery as “really hard.”

“The doctor kept us very well informed on what was going on,” said Christine’s husband, Jared, who, along with family members, anxiously waited for information during delivery. “After everything was resolved, the doctor came in and let us know exactly how serious everything was. She kinda told me, in a matter of an hour or so, I was almost a first-time father and a widower.”

During the surgery, Christine required six units of red blood cells, two units of fresh frozen plasma and additional platelets. The lifesaving needs were supplied by the Blood Alliance, a non-profit community blood bank that serves the area’s hospitals. Christine, who grew up in northern New Jersey, said she had not participated in giving blood since attending high school, but has a new understanding of the importance of donors. She and her family now make it a point to give blood more regularly. “People don’t realize, they could, or their family member could have something happen,” Christine said. “You can be in an accident, you can go in for a normal, minor surgery, or have a baby like I did, and end up needing blood to save your life.”

Since the birth of Reese, Christine and Jared’s family has grown with the birth of Holden, who arrived through a ‘‘routine” C-section delivery. Despite the frightening experience with Reese, Christine said she was told by her doctors there was no reason to believe there would be more complications. “They reassured me of that,” Christine added. “And we still want more kids.”

What is The Blood Alliance (TBA)?
A non-profit community blood bank that is the sole provider of transfusable blood products to 40 local hospitals and medical facilities in northeast Florida, and portions of Georgia and South Carolina, including Hilton Head Regional Health Care, Beaufort Memorial Hospital and Coastal Carolina Hospital.

By the numbers
• 400 units - Blood donation goal every month for Beaufort and Jasper counties and the Savannah area.
• Less than 10 percent - The percentage of Americans who give blood of the roughly 40 percent of healthy Americans who can.
• Every 2 seconds - How often people in America use donated blood.
• 110 pounds - Minimum weight of donor.
• 17-years-old - Minimum age of donor.

It’s Not that Scary:
The Blood Alliance wants to assure you that the slightly uncomfortable sensation of a needle injection when giving blood only lasts for a few seconds. It’s a small sacrifice to pay to save lives! “The actual experience of donating the blood is really not a big deal on the donor’s part. The fact someone is donating blood is a big deal,” said Michele Barker, TBA donor resource consultant in Beaufort and Bluffton. One pint of blood can save up to three peoples’ lives.

To host a blood drive
Companies, schools and organizations can help save lives by sponsoring a blood donation program on site. For information:
Call Michele Barker at 843-226-0722, go to Igiveblood.com, or call The Blood Alliance headquarters in Jacksonville, FL at 888-98-TBA-HERO (888-998-2243).