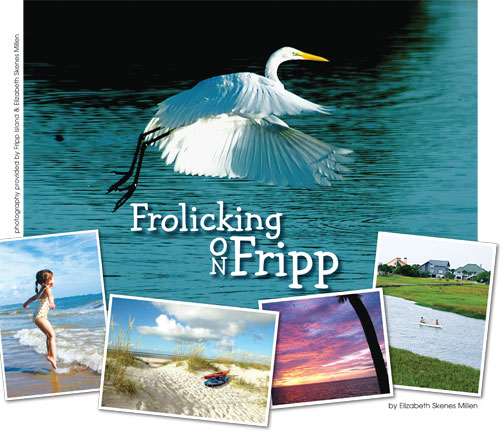 As I arrived onto Fripp Island on a sunny Friday afternoon, I felt a heaviness leave my shoulders. My breaths somehow seemed deeper, penetrating my soul and leaving me with a tranquility I hadn't felt in months. The drive from my home on Hilton Head Island had been enjoyable. My daughter, Jacie, age 12, and I were alone in my car and listened to a fun book-on-tape in between a lot of girl-talk and giggles. The boys, my husband Dana, son Conner, and his buddy Zach, had taken Zach's truck because I wanted to bring the bikes. Before I knew it, we were there. For me, the drive was the perfect amount of time-long enough to unwind and feel like I was getting out of Dodge, but short enough that no pit stops were needed to get out, stretch your legs, and allow your nerves respite from interstate traffic. In fact, no interstates were necessary at all, as our trip was as scenic as it was familiar. We did stop once, but only because a roadside boiled-peanut stand beckoned our taste buds. Amazingly, not one time did my daughter ask, "Are we there yet?" or "How much longer?"

I was excited about the weekend ahead of us, and as soon as we checked-in, it just felt good. When I was growing up, my family took trips to the beach every year. We usually took two cars because not only did we pack up all the groceries we would need for the week, we also packed sheets, towels, bikes, skateboards, beach chairs, radios, coolers, board games, the dog, and basically anything else that would fit in the back of the truck, except the kitchen sink. This "weekend Fripp trip" was inducing nostalgic feelings that remind me of my childhood vacations, only this time I was the adult. This made me feel very happy-and I didn't even have to bring my own sheets or towels.

Fripp Island is the most seaward of the beautiful Carolina Sea Islands. It is located 18 miles east of Beaufort, South Carolina. Rich with history, beauty, nature, and three-and-a-half miles of gorgeous beaches, Fripp Island offers something for everyone. Even Hollywood has found Fripp Island fascinating as well. In fact, it was at the Ocean Creek venue and the surrounding tidal marsh that was used as a film set for both Forrest Gump and Disney's The Jungle Book! Additionally, Jacques Cousteau has said that Ocean Creek is framed by some of the world's most fertile and pristine salt marshes.1 I would have to agree, and you would too if you woke up to the incredible view that sprawled from both levels of our Verandah Beach Villa.

We chose to stay in the Verandah Beach area because of its close proximity to the family pool (there is also an adult-only pool at the main clubhouse), the villas have full-size kitchens, and yes, the views are incredible. Our three-bedroom unit offered a screened porch right off the living area, where we kept a running game of dominos set up all weekend. With the breeze coming off the ocean, the porch was a cool resting place, rocking chairs and all, to take in the beauty that surrounded us. We saw a variety of birds swooping and stalking for early evening snacks. One afternoon a family of deer found their way to the back of our villa, while we sat quietly on our second level porch observing their graceful, yet calculated, movements. Another time, a father and son came slowly canoeing down the creek, one with a paddle in hand, the other leisurely fishing. One would have to work really hard not to relax on Fripp Island, but that doesn't mean it's a sleepy town.

Fripp Island is unique in many ways, but one of the most unique is that almost everyone drives golf carts. We rented our two golf carts before we ever went to our villa. The kids, two of them being licensed drivers, were thrilled that our main mode of transportation for the next three days would be four-seater carts. Being in the open cart allowed us to see so much more of our surroundings, breathe the salt air, and interact with other visitors on the island. It was almost as if there was an unspoken code of conduct, like in the boating world, that insisted upon friendliness. People would wave as they drove by, smiling, and even striking up conversations. I came to the conclusion that Fripp Island is a paradise for families, sports enthusiasts, and people who know how to stop and smell the roses. But even for those who don't, somehow this majestic land instinctively has a gentle way to remind you to do so.

As a Lowcountry resident and the mother of a 17-year-old, I found that one of the cool things about spending vacation time on Fripp was that some of my son's other friends could come and go. It proved to work out for us too, as we invited a few friends over one night for a big, delicious Beaufort Stew.

Within the first hour of settling into our villa, my husband and I had a meeting with the children. We went over safety rules of the golf cart, curfew times, and what food we had in the fridge. With a mutual respect in order and a solid understanding of the rules, the five of us decided right then and there, that whatever happened on Fripp, was to stay on Fripp. We then proceeded to have a grand-old-time.

Although, I can't tell you everything, because of our group vow, here's a synopsis of what we did (not all together mind you). That afternoon, we all went and played volleyball and checked out the General Store at the Fripp Island Marina. Later, Dana and I sowed some oats at the Sand Bar, listening to our buddy Tommy Beaumont and his band the "Groovetones". While there, we played a little Corn Hole and pool, danced, and engaged in a lot of chatter, making old South Carolina connections-one of my favorite things to do! The boys were on their own, which made them happy, except that they had to drag the 12-year-old sister along too.

The rest of the weekend we swam at the pool, body-surfed in the ocean, played volleyball, basketball, and beach bocce ball, crabbed with string and chicken necks, explored the island, pet wild deer, visited the activity center, talked with the resident naturalist, and put at least 247 miles on those two golf-carts. Fate would have it that the boys somehow got assigned the fastest cart on the island, so while we putted around, they flew by us, looking way cool, in hopes to see a pretty girl for Zach.

Well, I've said enough. This is where the vow kicks in, but I will share one more thing with you. We had the best time ever, both kids and adults alike. The fact is, we live less than three miles from the beach, but we are usually too busy to go. You know how it is when you're at home-always something to do like laundry, yardwork, walking the dogs, or grocery shopping. However, my trip to Fripp forced me to stop, unwind, relax, enjoy, and smile a smile so deep that I could feel it in my core. It's definitely one of those places that gets in your head and settles in your bones. The kind of place that you start planning your return as soon as you reluctantly drive through the security gate to go home. probably because deep down inside, you know you've just found a new home away from home.

IF YOU GO (and you really should):
Fripp Island Golf and Beach Resort
www.frippislandresort.com
Call (888) 741-8974
. Named one of the "100 Best Golf Resorts in North America" by Links Magazine, Fripp Island Golf & Beach Resort boasts two of the most spectacular golf courses in America.
. Racquet Club has eight Fast-Dry clay courts and two hard courts.
. Boating tours are available daily, as well as kayak and powerboat rentals.
. Shopping and dining all without ever leaving the island.