Drinking and Driving is Deadly

A look at drinking and driving/boating
through a millennial lens:
What we have to say, and more importantly,
what some of us are doing about it.

I always say “I love you” to my parents before getting in the car. It’s silly at my age, but there’s a reason for my caution. Driving is dangerous, and my young-adult life has been plagued by people I know becoming victims of driving/boating accidents. More specifically, drinking and driving/boating accidents. Whether you knew the victims, or only recognized their names from headlines, the accidents were shocking. They alarmed residents of the area and appalled me, a person who’s always assumed people my age (20-somethings) are indestructible. They show the dark side of a presumably safe state, the underbelly of a Lowcountry paradise. And they add to the statistic putting South Carolina towards the top of the list as the most dangerous driving state—the reason I make sure to say “I love you” before pulling out of my driveway.

A study by Safewise found that South Carolina had 6.22 impaired-driving deaths per 100,000 people. You may be questioning, what exactly does this mean? Here are the facts: In 2017, South Carolina had the second-highest DUI fatalities in the country, coming just below Wyoming. This has been a consistent spot for South Carolina, which was also ranked one of the top five most dangerous states for drinking and driving incidents in 2016.

Why does this state with “smiling faces and beautiful places” consistently rank top five in drinking and driving deaths? Safewise has found some interesting similarities between the states with high drinking and driving deaths: “Fifty percent of the worst states have no minimum jail time for first-time DUI offenders. South Carolina mandates between one and three days,” the safety-focused site says. They have also found that, “Among the 10 states with the most drunk-driving deaths, the average minimum fine for the first DUI conviction is $280, compared to $436 among the 10 states with the fewest drunk-driving deaths.”

While the statistics are crucial to understanding the state’s drinking and driving dilemma, it’s easy to brush them off as meaningless numbers. Numbers are worth looking into, however, when people’s lives are changed forever. After all, there is a face for each and every number.

Since the studies highlighting South Carolina as the No. 2 most dangerous driving state have been released, the state has increased its fight against drinking and driving. The South Carolina Highway Patrol has turned its focus on the Sober or Slammer campaign and creating stricter legislation. However, the problem goes deeper than legislation and campaigns. It comes down to the state’s culture and what citizens of South Carolina believe about drinking and driving. Do our citizens fully grasp the dangers of driving under the influence? Could there be some widely accepted myths about driving while drinking? Have you ever heard any of these before?

I’ve only had one…
Well, you’re not officially drunk unless you hit 0.8.
I’m going to wait a good hour before I drive.

These are the myths community members are working to debunk, and what better way to start than to show what can happen when you drink and drive?

Hanging out of a battered silver car was someone’s brother, son, classmate, friend or boyfriend. You never expect to see the person you love lifeless, but this is the sight that seems to shock students into the harsh reality. The good news is, while the person hanging out of the battered car is all of these things, they’re also an actor chosen for Beaufort Academy’s Prom Promise demonstration.

“We just wanted to make it more real,” Becky Bekemeyer, director of admissions at Beaufort Academy, explains. “Seeing their fellow classmates in a body bag just makes it more real. That was our goal; give them something they could see and not just hear grown-ups talking about…”

The program Prom Promise was brought to Beaufort Academy in anticipation of the school’s Prom celebrations last spring. Their main objective was to make prom “A Night to Remember, Not a Night to Regret.” The Lady’s Island/St. Helena Island Fire District partnered with the school to create real-life scenarios like sobriety testing, being arrested and seeing a deadly car accident. The local officers were also able to inform students about traffic-safety laws and the criminal and civil processes involved when a driver is charged with a DUI. “We just wanted to make sure our students are aware of the consequences and dangers that come with driving under the influence…what could happen if you’re in that situation,” Becky explains.

While at first there was pushback from students at the academy, many changed their tune after taking part in the program. “I actually had a lot of students say thank you,” Becky reveals, “We had students crying at the event. It was their boyfriend out there; it was their classmate who they’ve been with since they were 4 years old. I think it hit home and made them realize that bad things can happen.”

Going beyond education is Hilton Head Island native David Graupner. The senior Citadel Cadet was searching eBay when he saw a breathalyzer machine, and the idea hit him, “I thought ‘You know that’s awesome! I’ve never seen one of those before.’” When talking to David he makes the entire process sound like a piece of cake, but he assures me it was anything but easy. After coming up with the idea, scouring the internet for a reputable supplier and purchasing the machines, David had to pitch the machines to bars around Hilton Head and Charleston. “I definitely had a hard time, but eventually I was able to get good at it,” David chuckles. 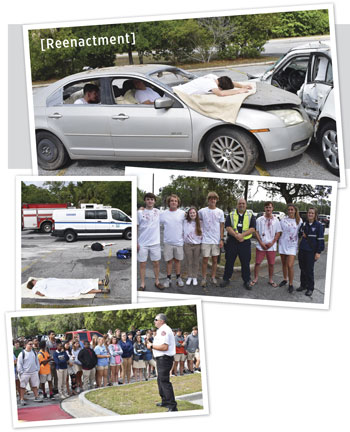 The machines, which are two dollars a blow, test users' Blood Alcohol Content, letting them know if they are above the legal limit. “I think it’s made people aware of how much they drink,” he explains, “it’s really good for the community…” Due to its success, David plans on expanding his business to more bars around the community, “Pretty much it’s always the No. 1 profiting machine in the bar,” he says confidently.

Machines like David’s allow bar patrons to make the right decision. But what do you do if you blow above the legal limit of 0.8? With ride-share services like Lyft and Uber, there is NO excuse. However, to ensure your safety, follow these tips provided by Uber, when ordering your ride-share service.

1. Request your ride inside to minimize the time you’re standing outside alone. The app notifies you when your Uber has arrived.

2. CHECK YOUR RIDE! The app offers the driver’s name, photo and license plate, as well as the make and model of the car.

3. Have the driver confirm your name before just hopping into the car. Ask them, “Who is this ride for?”

4. Be a back-seat rider, especially when alone.

6. Follow your intuition. If you feel you’re in an urgent situation, you can call 911 by using the emergency button located in the app. This will provide officers with your real-time location and trip details.

These positive changes in the community are helping to change the drinking and driving/boating culture in the Lowcountry. Studies suggest millennials are surpassing baby boomers in being less likely to drink and drive, mainly because ride-share is a part of millennial culture.

Now, there’s no excuse. It’s time we all do our part
and say NO MORE to drinking and driving.