HomeFeaturesHow to Invite Blessings Into Your Life 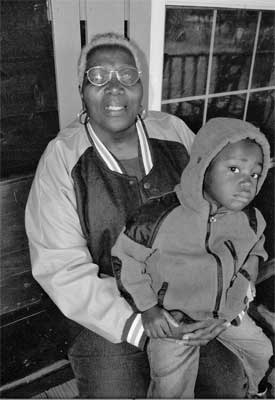 Mrs. Cornelia Bailey is one of the last true, born-and-raised Sapelo Islanders, resident of the only living Saltwater Geechee community left on the Georgia Sea Islands. Needless to say, she's led an interesting life. I could tell you how, for toys, she had the African grass dolls her mother made and a balloon fashioned by her father out of a hog's bladder. About how, at age 12, she was directed by church elders to go alone into the woods every night to pray and wait for a special dream that meant she was ready to be baptized in Blackbeard Creek. How her feisty, one-eyed, moonshine-drinking grandmother put a curse on her. How her family relied on fish, game, wild plants and scrappy subsistence farming to exist; how she didn't have electricity until she was grown and married; how the long winter evenings of her childhood were spent on a quilt in front of the fire while her Papa made cast nets and her Mama told Brer Rabbit tales.

But all that's been written about. In fact, Cornelia Bailey's fascinating memoir, God, Dr. Buzzard, and the Bolito Man, is widely available at local libraries and bookstores.

"Back then, the womens did everything the mens did...There wasn't much they couldn't do."

Instead, I'm going to tell you about one cold, rainy morning I spent with Mrs. Cornelia at her kitchen table, drinking hot Lipton tea and sucking the juice out of Sapelo-grown oranges. (Cornelia seemed happy to report that when she traveled to Sierra Leone to explore her heritage, she saw African children employ the same method she'd learned: gently mash the orange inside its skin, then bite the top off and suck out the juice.) As we talked, several of Cornelia's many grandkids came and went, her quiet husband Julius tinkered with a new air compressor he'd gotten to fix flats-one less thing he'd have to rely on the mainland for-and the phone rang approximately every 20 minutes as far-flung friends and relatives called to check in.

Though there are now just 54 full-time residents of Sapelo's only remaining black community, Hog Hammock (pronounced "H˚mmock" by residents), scattered relatives tend to stay connected, and Cornelia's kitchen seems to be the central switchboard. Perhaps this is because she is a living link to the old days of the island.

"Back then, the womens did everything the mens did," said Cornelia about Sapelo's rich legacy of capable females. "They could shoot, they could trap, they could make a cast net. They sewed, they made quilts, they took care of the garden. They would take care of the kids and do the laundry, then they'd go out and catch fish to fry for supper. There wasn't too much they couldn't do."

Though nowadays you may not see Cornelia setting traps for small game to feed her family, she reflects that same obstinate, make-do attitude of her forbearers. Only the struggle for survival now is different. It's no longer a matter of getting enough to eat this winter; the challenge is nothing less than ensuring the continued existence of an entire people.

"We trying to keep this community afloat," she said. "Every once in a while we lose somebody, but there ain't nobody replacing them. In a city, someone dies, someone else bein' born. We don't have that."

As with just about all the world's problems, the situation here boils down to money. First of all, traditional residents like Cornelia whose families have been here for generations, all the way back to slavery times, are hard pressed to pay property taxes that rise every time another "outsider" comes in and builds a big luxury home. Secondly, there are virtually no jobs on the island-no way for young people to make a living.

"We need to find a way to create our own economic base so our grands and great-grands can come back," said Cornelia. "We are gonna have to beat the odds because there are people betting that we here on Sapelo gonna cease to exist."

So what's her plan? To preserve the land, history and culture of the island while simultaneously providing jobs for residents. In 1993, Cornelia and several other community members founded the non-profit Sapelo Island Cultural and Revitalization Society (SICARS) and, thus far, one of their most important achievements has been the acquisition of 25 acres from the State of Georgia. (Though much of Sapelo was once owned by freed blacks, it now belongs chiefly to the state as a nature reserve.) Cornelia's vision is to see this land become a "cultural village," a sort of living, breathing educational exhibit where visitors can see how Sapelo Islanders have thrived "from Africa to now." Food, religion, dwellings, traditional crafts-the full scope of Saltwater Geechee culture would be there for people to see and participate in, whether they wanted to throw a cast net or try their hand at basketmaking.

Ironically, while outsiders have figured so heavily into the demise of the Geechee community, they are now being called upon to play a role in its salvation. "Hopefully there are some good people out there who are interested in culture and heritage," said Cornelia, estimating it will take $1.5 million to bring her cultural village to fruition. "Maybe they can help us. Some people say this is an African-American thing, but I say no; it's an everybody thing. We are all connected so everybody can be a part of it; but if we lose it, everybody loses."