Another Chance for Happily Ever After 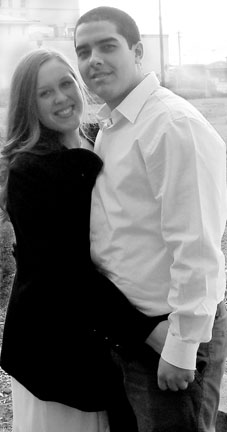 On May 5, 2009, while Cheryl was at school in Clemson, SC she met a boy through an online dating service. By June 6 they were engaged, and on July 18 they were married. "I have always been a hopeless romantic and everything that happened before we got married was like a fairy tale. There was a point before the wedding when I thought about calling it off, but I thought being spontaneous was part of the romance," Cheryl recalled.
However, three months into the marriage thing started to go downhill. He began to mentally and emotionally abuse her with lies, manipulations and impossible expectations, then on December 7, things got physical. "Once we got married he acted as if gaining a wife meant gaining a slave. Right before Thanksgiving my mom called to tell me that a close friend of mine had died in a car accident, and the next day he told me he wanted a divorce. Since I didn't believe in divorce, I kept pouring 100 percent into a marriage that was tearing me apart. Then, on December 7, he threw me across the room."

Cheryl called the police, but the next day he returned with more violent threats. She finally decided to give him his divorce, and returned home to Bluffton in January, 2010. She slipped into a period of bitterness, depression, loneliness and alcoholism. She began looking for love in all the wrong places, then finally decided to give up on love all together.

One night, while at a bar, she thought about how a year ago she had rededicated her life to Christ. That night she went home and fell on her knees, praying to God to deliver her from her pain, depression and alcoholism.

After that, everything turned around. She shared her testimony in front of Lowcountry Community Church, which impacted many women and brought her friendships she had never expected. She also traveled to South Africa, where she once again shared her story, and impacted an entire community with her words and actions. "What I went through was meant to help other people, but I didn't see it at the time. I was sad, then I was bitter, and then I forgave, and once I forgave, God was able to use me to make a difference in other people's lives."

Another thing that changed for Cheryl was her belief in love, and the chance to still have her "Happily Ever After." In March, she began to have feelings for a co-worker named Camilo, but her fear of being hurt again caused her to push him away. "I probably stood him up ten times, because every time I made plans with him I got scared. The night [of our first date] he kissed me for the very first time and I remember thinking that if he was the only person to kiss me for the rest of my life then I would be 110 percent happy. Going on four months of being inseparable was when I realized that true love did exist and I was so madly, deeply, uncontrollably in love that I forgot about keeping a guard around my heart and I just kept falling."

At the end of October, Camilo proposed and Cheryl accepted. The couple is planning on marrying sometime in 2011. "I started thinking a few months ago how lucky I am to have found true love, but the truth is I'm not lucky, I'm blessed. If you don't believe that what Satan tries to destroy in your life God will take and turn around for good, you should. For all of the hurt that I've been through, all the neglect, the physical, mental, and emotional abuse, all the times I gave more of myself and never got anything in return, all the lonely nights, the hopeless nights, the drunk nights and the times I looked for love in all the wrong places - I went through it all because it led me to him. Camilo and I have put God at the center of our relationship, and He has blessed us in every way imaginable."

Where he proposed: At a Cuban restaurant in Charlotte, NC. When the waitress brought out dessert, the plate had the words "Will you marry me" written on it with a ring on the cake.
Their songs: "Smile" by Uncle Kracker and "Just the Way You Are" by Bruno Mars.
Most memorable date: "We walked on the beach, swung on swings in the moonlight and talked for hours­- getting to know everything about each other. It was so romantic, but for the first time, it was romantic and real."