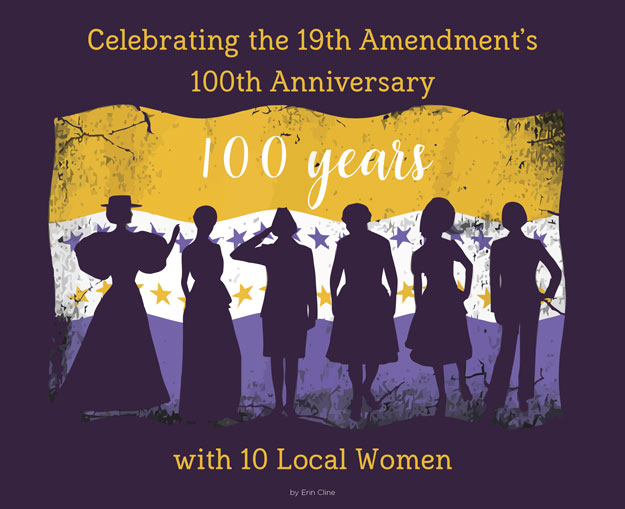 August 26, 1920 marks one of the most important, life-changing moments for women in the United States: it’s the day the 19th Amendment was adopted into the Constitution. With this amendment, females acquired the right to vote—the ability to have a say in how the country runs and evolves in the years to come. And since that day in 1920, women have been tirelessly unlocking and leaning into their potential to be more than just nurturing, subdued figures in society. That day, one hundred years ago, gave women the much-needed momentum for dissolving the socially conditioned view that they could never be equal to their male counterparts, nor have a place in politics.

Oh, how things have changed since then!

In celebration of this 100th anniversary of the 19th Amendment, we had the pleasure and honor of learning about the gratitude, thoughts, wishes and actions of 10 outstanding female voters.

As you read through the interviews below, I hope these words will inspire you—whether you’re female or male—to stand tall in what you believe, let your voice be heard and work towards a greater good for all. Let’s aim to never take our voting rights for granted and to never give up on using them for building, refining and fostering the American dream.

Here’s what your neighbors had to say:

What kind of world do you hope to create through voting?
Imelda G.
The kind of world I want to create through voting is a world that I want my brothers to live in, a world I want my mother to live in—and my daughter and son, if I have children one day. I want it to be a world where there is freedom and there is equality and justice. And I want it to be a world where people have choices. I want it to be the best world it can be. I have so many people I love, and I want them to experience a good one.
I’m a 26-year-old Mexican American and come from a family of immigrants and agricultural workers. I have two brothers with special needs. And I grew up in poverty and income based housing with food stamps. I was homeless at one point. It’s easy to grow up feeling like you don’t have a voice from seeing injustice, seeing unequal opportunities. But it was also easy seeing hard work and perseverance. So now I want to make this world the American dream my family envisions with greater opportunities, equality, safety and happiness. I want this world to be the one where the sacrifices they made were worth it. And I want to use the voice that I didn’t have when I was younger.

Stefanie B.
I would like to create a world of equality that is representative of all people who have been given the privilege to vote, and also to help strengthen the original values, faith, and hard work that the United States was founded upon in the Constitution.

The women’s suffrage movement—fueled by an unstoppable force of females and its own political press—crafted a powerful and effective social cause that was ultimately, and most importantly, non-violent. These women used clever political tactics, such as parades and protests, campaign buttons and clothing, and cause-related cartoons. They even did jail time instead of paying fines after publicly shining a light on their humanly right to vote.1

If you could meet one of these inspiring females, what would you ask or say to her, and why?

Jayne V.
Ida B. Wells-Barnett fascinates me. She understood the complex, common ideological relationships between racism and sexism long before her white suffragette counterparts. She was an outrageously brave journalist, penning criticisms and investigative reports paralleling the oppression of both women and blacks. She certainly knew her worth and wouldn’t allow anyone to place limitations on her or others who were oppressed. I think she knew that the truths she fought for transcended time and so, by golly, she was going to embody those truths and advocate for those truths as long as she was alive... which is exactly what she did.
If I could sit down and share some sweet tea with her today, I would thank Ida B. Wells for her commitment to human rights, her ability to stand strong for the truth against every form of discrimination and threat and her willingness to expose the ugliest, most vile human tendencies with hope for the generations to come. I’d tell her that her work was not in vain, and is ongoing still. I’d like to know how she synthesized her thoughts that fueled her actions for change... and how she remained so resilient and sure of herself when most people ostracized her. This was a woman who, through her own painful experiences, had the grace, wisdom and courage to transform discrimination into motivation and motivation into unapologetic, argumentative action for justice and equality. I admire her because she never questioned what she knew in her soul was the truth.

Iva W.
I would actually like to express a letter of gratitude to all those women because right now we get to use the fruits of their labor at a very important time in history—a time where we must choose the wisest, most knowledgeable, most caring leader to carry us through challenging times. It just blows me away that we’re celebrating 100 years of being able to vote at a time like this. It’s such an incredible thing to think about, and that those women made it possible for us to have a say in what’s currently going on. This is happening at a time like no other. With all that being said, here’s my letter:
Dear Women of 1920: How wise you were, how brave you were, how strong you were to persistently work toward giving us women the choice we have today to have a say in how our world operates. We now benefit from your dreams. I can only hope that you will see that our decisions now – with our votes – will indicate that your work was not in vain. I am so grateful for all that you did. I hope and pray that we will always use this right wisely, the one you fought so hard for, and not take it for granted. Thank you so much. Sincerely, Iva

As a female, what does voting mean to you?

Oatanisha D.
Being able to vote means my voice and perspective are being valued – that my worth is being recognized and sought out. Being able to vote means I’m able to voice what the needs are of my family and the community I’m connected with, and able to then address more needs on the horizon that are coming up. By voting, I’m looking to tomorrow. I’m also helping groups and individuals that may not have any information or input about issues and current events. By voting, I’m able to contribute input and insight towards creating solid plans for our goals.

How do you feel about voting as a female?
Say anything. Surprise us!

Libby R.
I am so appreciative to the women who sacrificed so much to guarantee my right to vote.  I take that responsibility very seriously, especially when I consider the consequences of not voting. I am a mother now, and my vote is meant to ensure a better tomorrow for my kids. I recognize democracy is not a given. It is a continued practice that requires steadfast attention and care.

Susan C.
I’m grateful to the women who walked before me and sacrificed so much to obtain my and other women’s right to vote. I’m exercising that hard fought right by taking responsibility that my vote always is well informed and always is for the good of all. Even if that means expanding what I’ve thought and believed in the past. Being open to research important issues and even change our minds if necessary is essential to our personal growth and our growth as a country.

How do you contribute to the history of so many women who have fought for our rights?

Lauren H.
I try to honor that legacy by supporting other women and their goals through respect, empathy, mentorship and advocacy, and by doing all I can to amplify their voices.

We’ve come a long way as women when it comes to our rights. With this in mind, what is your message to younger females as they begin voting?
Cynthia B.
Never miss the opportunity to cast your vote! Educate yourself, keep an open mind as you consider the issues and challenges on the local, state and national fronts. Be brave, form your own opinions based on valid evidence of personal rights, balanced by the common good. Remember this, voting is more than just a hard-earned right and responsibility as a citizen, voting is your superpower!

Inez W., 100 years old, Sprenger Health
We have come a long way as women. We are both independent and strong. No longer are we just seen as one to cook, clean and raise children. We are successful in every avenue from work to home and all in between. We as women can do it all, so empower yourself, respect your rights and vote!