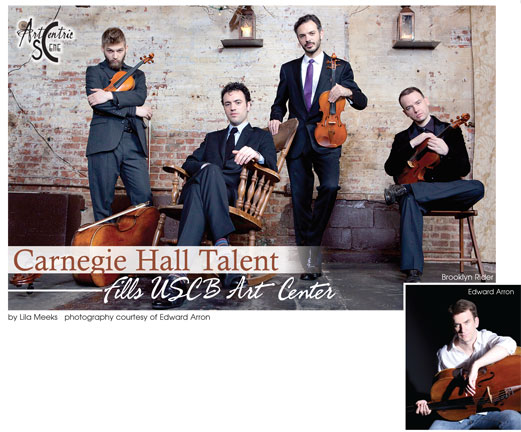 The University of South Carolina Beaufort Festival Series will open its 33rd season on November 6, 2011. The season will include five early evening concerts on Sundays from November through April at the USCB Arts Center.  Artistic Director and cellist Edward Arron will welcome new and returning talents to ensure the series' stellar reputation as one of the most distinguished musical offerings, not only in the Hilton Head/Bluffton/Beaufort region, but also in the Savannah and Charleston areas, as well.

Performing both classical and contemporary masterpieces, internationally acclaimed artists will arrive at the USCB Arts Center from major concert halls around the world. Great favorites with the lowcountry audiences will be returning, including violinists Jesse Mills, Kyung Sun Lee, and Yehonatan Berick; and pianists Jeewon Park, Gilles Vonsattel, and Rieko Aizawa. World-renown soprano Hyunah Yu will be introduced at the December concert, and the much-in-demand group Brooklyn Rider, a genre-defying string quartet known for their adventurous, cutting edge performances of chamber music, will bring a contemporary approach to this venerable art form in February. According to National Public Radio, they are "recreating the 300-year old form of string quartet as a vital and creative 21st-century ensemble." They will be debuting this season in Beijing, Hong Kong and Beaufort, S.C.

The variety and excellence of this year's composers will be as great as the variety and excellence of the artists. The season will include exquisitely crafted, classical period masterworks by Mozart, Beethoven, Boccherini, and Haydn, and more dramatic pieces by Richard Strauss, Schumann, Dvorak, and Prokofiev. More contemporary and less familiar composers such as Kreisler, Schickele, Novacek, and Sollima also have works that will be introduced during the year's program.

The site for these performances, the Arts Center on Carteret Street, is remarkable for its superb acoustics and Steinway concert grand piano. Concert dates are November 6th, December 11th, February 19th, March 25th, and April 29th. Complete program information is available at www.uscb.edu/festivalseries. Subscriptions and individual tickets can be ordered through Staci Breton at 843-208-8246/This email address is being protected from spambots. You need JavaScript enabled to view it..

Except for the pleasure it generates, the USC Beaufort Chamber Music Series is not a profit-making venture. Ticket-sales cover only part of the expenses. Through the years it has depended upon the kindness and generosity of its friends: the university, local corporate advertisers, and individual donors, who become Friends of the Festival with their donations.

This year, the Friends of the Festival will be holding three receptions with the artists. On the eve of the March concert, Mr. and Mrs. William Lortz will host a gala at their home on Bray's Island. Guests for this very special evening of chamber music, played in an intimate setting, will include all Friends at the Patron level or higher and artists Edward Arron, Jeewon Park, and Kyung Sun Lee. For information about the Friends and receptions, please call Lila Meeks at 843-522-0779.

From its founding in 1979 by USCB Professor Mary Whisonant, the Festival Series has presented internationally renowned artists such as pianists Jean Yves Thibaudet and Richard Goode, violinist Joshua Bell, flautist Paula Robison, cellist Carter Bray and the Emerson, Tokyo and St. Lawrence String Quartets. For several of the early years, performances were held at area banks and churches. In 1983 with the growth of membership and the opening of the USCB Performing Arts Center, the venue was moved to the Center.  After Professor Whisonant's retirement, Beaufortonian Harriet Keyserling prevailed upon Charles Wadsworth to assume directorship and bring to Beaufort the chamber music riches he had unearthed for New York's Lincoln Center and Charleston's Spoleto.  The quality of the music and the talents of the artists have surprised and delighted audiences throughout the Whisonant and Wadsworth tenures and have continued to do so under the leadership of Edward Arron, the 2011 Series Artistic Director and Host.

Cellist Edward Arron spent two years assisting Mr. Wadsworth with the USCB Series getting to know the Lowcountry audience, his artistry, and thoughtful commentary . He also gained respect for his connectivity to the most significant young artists playing and composing chamber music at this time. As one of those significant young artists himself, and the Artistic Director for the Metropolitan Museum's Artists in Concert Series for the past eight seasons, he is uniquely qualified to bring exceptional talent and exciting programming to the Lowcountry of South Carolina.