A New Phone for an Old User 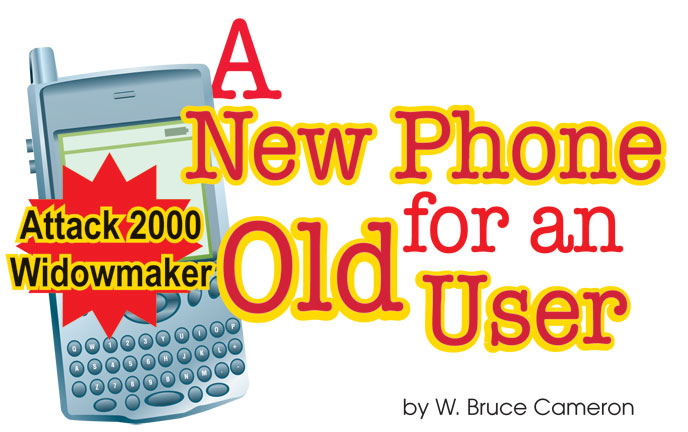 I recently upgraded my cell phone, a process that was as easy and painless as dental school. My old phone had a key go dead. When I was texting, I could no longer use the letter "p," which doesn't sound like it would be so difficult, but in my oinion is retty hard.

I had to laugh at some of the names of the cell phones out there, like "Interceptor" and "Penetrator." Do they think that just because I'm a guy I'm going to want a phone with an aggressive name? I picked up the "Attack 2000 Widowmaker." It has a lot of features I need, like "Nuclear-Tipped Dialing" and "Delta Force Wi-Fi."

The first cell phone I ever owned was hardly a slim, high-tech device -- it was more like a brick with buttons, only with worse reception. If you wanted to use your phone to give someone a message, you were better off throwing it at him and hoping you broke his car window. The phone had two functions: outgoing calls and incoming phone bills. The latter function worked remarkably well.

My new cell phone is more advanced than the first space shuttle. It runs an operating system called "Klingon." It includes a snakebite kit, a carpet cleaner and an application that warns you when Lindsay Lohan is driving. I can listen to music, sports and sports set to music. It will baby-sit the dog, call 911 if you are choking and analyze the fat content of your lasagna.

What I can't do is make a phone call -- my fingers are too fat for the touch screen. I can't even receive a call, because I haven't mastered "unlocking" the phone. The phone's ring sounds like a woman gasping combined with an electric toothbrush and a cat throwing up. When I hear it, I began frantically stroking the smooth face of the phone like a man hoping to get three wishes from a magic lamp. You have not unlocked your phone, a message tells me. Go lie face down in a ditch.

The user's manual says, "To unlock your phone, simply touch the 'unlock phone' icon." It doesn't say what to do when you've accidentally erased your unlock phone icon, which I apparently managed to do when I was attempting to run the hydrogen balloon simulator.

In attempting to restore the unlock phone icon by following the instructions in the user's manual, I deleted the user's manual. The good news, though, is that the water pik function was successfully restored and that my Bluetooth appliance application reports that the milk in my refrigerator is "happy."

In order to use the phone, I had to sign up for a new plan, though when I read the fine points I decided it was less a "plan" than a program to transfer funds to the phone company. I have Unlimited Text Messaging, which my son tells me is "not enough." I can also download massive amounts of data, which is ironic because I don't want any data. I already have too much data!

I can also store a lot of voice mail messages, which is good because all my calls roll to voice mail while the cat is still throwing up. It's a good thing to have voice mail, or at least it would be if my fingers weren't too fat to listen to it. I know I have a voice mail waiting because the phone makes a sound like an elf ringing a bell followed by a baby eating spinach.

There are a lot of sounds the phone makes that indicate something is happening, though I never know what. Throughout the day, my phone will variously chirp, burp and growl -- it's like living with a velociraptor. The last time I went to try to shut it off, the thing bit me.

So if you've been trying to call me, please know that I got your message, especially if the message is "your cat is sick." And I'll call you back when I get the Klingons to unlock the phone.

Call me. I won't be able to answer, but I'll know something has happened.

W. Bruce Cameron is a nationally syndicated columnist and the author of three books including "8 Simple Rules for Dating My Teenage Daughter" (Workman Publishing). To write Bruce Cameron, visit his website at www.wbrucecameron.com.