HomeFeaturesGet Centered and Just Be 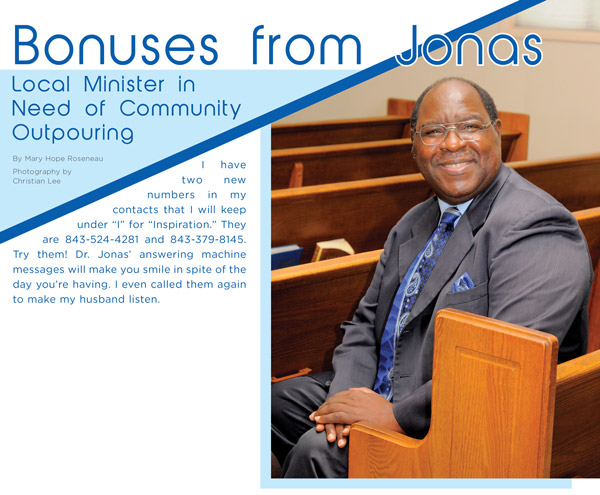 I met Dr. Gadson at his church, the Beaufort Church of Christ, on Highway 170 on a sweltering Monday in August. He met me cheerfully at the church door in an impeccable “Sunday” suit, and offered me a cold bottle of water. That sums up Dr. Gadson. He is positive, upbeat, on time and ready to serve his fellow human beings. I mentioned I liked his sign out front “Love One Another,” particularly after the terrible weekend in Charlottesville filled with hate. He agreed, and said he knows that we are living in terrible times, but he was chosen “for such a time as this.”

Dr. Gadson grew up on St. Helena Island and went to elementary through junior high there, and was in the first class that was transferred to Beaufort High for implementation of the integration law, albeit several years late. He graduated in 1971, and at age 17 he traveled to Rochester, N.Y. to live with a sister and began a job with Xerox. This led to a long career with Eastman Kodak as a leadership trainer and diversity coordinator. He returned home to the Lowcountry in 2005 to care for his sick mother until her death three years later. He was honored as a member of the Beaufort High School Alumni Hall of Fame in 2010 for “profession, leadership and service.”

He is an inspirational speaker, accomplished orator, always worked a full time job, and was never on the church payroll. All the work he has done in the ministry for 45 years has been voluntary, using his personal income to do the mission work in Beaufort.

As a member of Toastmasters International, Dr. Gadson achieved his “DTM” Distinguished Toastmaster designation in 1999, the highest level of accomplishment in this worldwide organization, focusing on leadership, communication and listening.

In 2015, he got the life changing moment in an instant: He was diagnosed with kidney disease, as well as finding out he had only one kidney. Unknown to him, a kidney was removed from him as a small child to save him from a serious infection. It took 50 years of living with one kidney, going full throttle—the only speed Dr. Gadson runs—to find out his remaining kidney was now failing. He began dialysis in October of 2015. When I asked him to describe what that’s like, he took a deep breath, and said simply, “It’s brutal.” I was startled at his honesty after such an upbeat, positive narrative.

He goes three times a week for a total of 11 hours to have all his blood re-circulated and cleaned. He thought he would read during this time, but found it’s impossible to turn pages with two needles in his left arm and a blood pressure cuff on his right. Recently he began listening to motivational messages on headphones, as well as ministering to the other dialysis patients nearby. Afterwards, he confesses, he is so exhausted that the rest of the day he just has to recover.

There is a page at www.GoFundMe.com/jonasbonuskidneyfund set up two months ago by friends to help Dr. Gadson with his huge medical bills, and hopefully, the cost for a kidney transplant. “I know that kidney’s out there waiting for me,” he said with a big smile and a faith that is strong.

BONUSES FROM JONAS
Dr. Gadson’s one sentence sermons are succinct, catchy, and stay with you. He likes to say, “He swings the bucket down low so that everyone can drink!” He calls them his “Bonuses from Jonas.”

• Don’t let anyone bury you until after you are dead. You are bigger than that, you are better than that and the best is still in you!

• When you’re running out of time, it’s time to start running.

• Dr. Gadson’s favorite: “Beloved, I wish above all things that you may prosper and be in health, even as your soul prospers.” III John 1:12