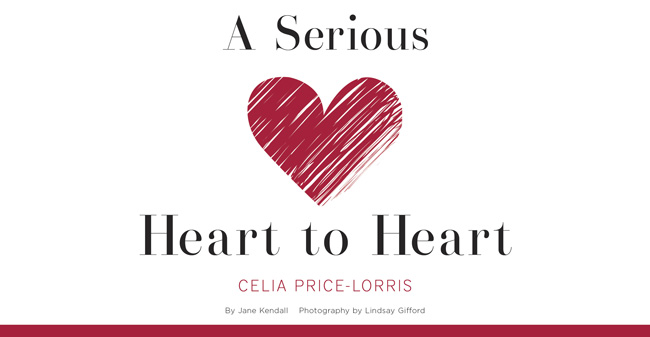 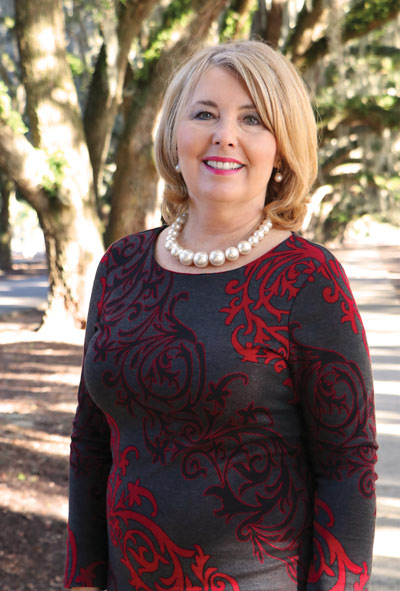 2012 was a tumultuous year for Celia Price-Lorris. Her life on the outside appeared enviable. She had a high paying job, a beautiful home, a husband, and three grown children who were established in their own lives. Then it all fell apart: Separation and divorce, despite earnest attempts at healing the relationship. Celia lost her home and her job, as well. She moved away from Bluffton to live near her daughter in Murrells Inlet and stayed with friends, taking a series of temporary jobs to support herself. For the next three years, she struggled, trying to find and redefine herself.
She spent lots of time journaling and in reflective prayer, asking God for help and direction. This was the beginning of her inward journey.

Fast forward to 2014: Serendipitously, Celia met Gregory Lorris, a kind and gentle man, who became instantly infatuated with her. They married two years later on April 9, 2016, intending to live a fairy tale existence. It wasn’t long after that life threw them two giant curve balls. In late 2016, Celia’s son revealed to her that he had an addiction to heroin. He had lost his job, his home, his marriage and connection to his toddler son. Celia and Gregory decided to open their home for her son temporarily, until he could get back on his feet. Gregory had been single for 16 years and never had children, so this was an extraordinary challenge for him. In January 2017, upon returning from a cruise, Celia learned that her son had been hospitalized for treatment of a heroin overdose. Celia and Gregory prayed constantly for help to get through this. Her son entered an inpatient drug treatment program and has since turned his life around.

In March of 2017, Celia, who had never been ill a day in her life, contracted a sinus infection that persisted, despite antibiotic therapy. She didn’t feel well for weeks and became weaker and weaker. Her heart was racing, and she was having difficulty breathing. Finally, at the urging of friends, she sought medical care.

The diagnosis was not pretty: The organism that had caused the sinus infection had traveled to Celia’s heart and caused congestive heart failure.

On April 9, 2017, their first wedding anniversary, Celia asked Gregory, “Do we celebrate or separate?” Gregory chose to celebrate! Celia sings Gregory’s praises: “I was filled with such despair with my son’s addiction, a heart that was sick, and the depression from marrying a man who had to endure all I had brought with me to a marriage that was only one year young! Gregory’s endurance and prayers for me and my son proved to set the groundwork for a foundation of love I feel will last our lifetime.”

Celia has learned to
slow down, take life easier,
and live in the moment.

A few months later Celia had to undergo surgery for the placement of a pacemaker/defibrillator, which would become part of her anatomy for the rest of her life. An enthusiastic volunteer for the American Heart Association for many years, Celia never dreamed she would become a direct beneficiary of AHA lifesaving research and technology. Thanks to Gregory, their commitment to each other, and abiding faith, they are both now doing well. Celia has learned to slow down, take life easier, and live in the moment. She is accepting the simplicity that this life change has afforded her. She doesn’t take anything for granted. Gratitude is her daily mantra. Her goal is to live a life filled with peace and tranquility. Celia is a firm believer of prayer, releasing it to God, and accepting the outcome, even if it is not what she had hoped for. She knows that He always has the right plan for every situation, regardless of how it may seem from the outside. One of her favorite songs is Carrie Underwood’s “Jesus, Take the Wheel. Jesus, take the wheel. Take it from my hands. Cause I can’t do this on my own. I’m letting go.” 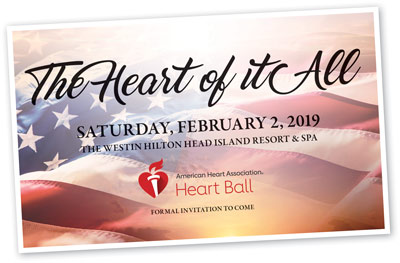 The American Heart Association has been saving lives in communities since 1924, working with schools, hospitals and community centers. Their educational and cutting-edge research programs are critical to helping people live stronger, healthier, and longer lives.

Hilton Head’s annual Southern Coast Heart Ball celebrates these efforts to build a foundation of health in our community. The 2019 Southern Coast Heart Ball will be held on February 2 at the Westin Hilton Head Island Resort and Spa. The evening's festivities will include a silent and live auction, dinner, dancing, and an opportunity to Open Your Heart and further support the mission of the American Heart Association.

American Heart Association Volunteer Opportunities:
Contact Carla Raines: This email address is being protected from spambots. You need JavaScript enabled to view it.