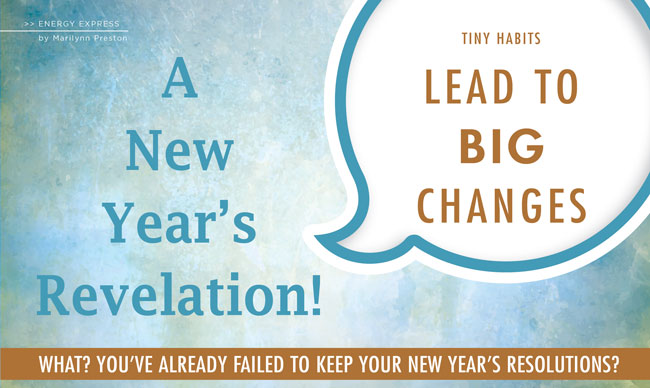 What? You’ve already failed to keep your New Year’s resolutions?

Of course you have. Welcome to human nature. And don’t feel badly. Zillions of your fellow Americans are also failing to give up nachos, sleep seven hours a night, bicycle to work, defend their souls against time-sucking small-screen devices. Great intentions, depressing results.

Why is the new-habit failure rate so high? Because changing behavior—as in developing new habits—is a skill.

Like shoeing a horse. It’s something you need to learn how to do, so when you decide to do it, your chance of success will skyrocket.

That’s what happened to Christine Carter, Ph.D., a sociologist and senior fellow with the Greater Good Science Center at the University of California, Berkeley. Carter struggled for years to get into the much-admired habit of exercising every morning. (Well, almost every morning.)

Carter knew—as we all do—that if she could do some exercise every day, it would bring more ease and power into her busy life, not to mention more physical, emotional and intellectual strength.

And still she failed... and failed again... until she did the research and rethinking necessary to set herself up for success.

Now when her alarm goes off in the morning, Carter is up and out of bed, meditating for seven to 20 minutes, and by 6:20-ish most mornings she’s doing her “better than nothing” daily exercise routine that began with a set of 15 pushups, 30 situps and 25 squats and has now evolved into a seven-minute circuit of 12 different high-intensity exercises. Plus, she runs for some minutes, stretches and, most Sundays, goes on a 3-mile hike with friends.

“After a year of habitually doing at least some exercise every morning, I woke up one day to realize that I was in the best shape of my life,” she writes in her latest book, an easy and inspiring read called The Sweet Spot: How To Accomplish More By Doing Less.

Christine cracked what she calls the “Habit Code,” and so can you, if you start small and proceed with knowledge and enthusiasm. Here are four of her best tips for happier habit-forming. You’ll find lots more on her website: http://www.christinecarter.com.

START WITH A TINY HABIT. You probably have many new habits you’d like to begin, but based on her research, Carter wants you to choose just one habit that is “ridiculously easy to do.” It should take less than 30 seconds and require very little physical effort or money, and—no exceptions—it must be something you do at least once a day. Some tiny habit suggestions: “After I put my head on the pillow, I will think of one good thing from the day,” or “After I hear my phone ring, I will exhale and relax for two seconds.” Once you have your ridiculously easy habit, write it down, and perform it every day. “Tiny habits are about skill building and about inching your way toward lifelong routines, and ease,” writes Carter, who cherishes ease.

THROW AMBITION OUT. Carter believes the most important thing you can do when you are creating a new habit is to “ditch your ambition to do everything impressively.” Carter was overambitious when she set a half-marathon as her running goal. Better to train for a 5K and succeed.

START SMALL, AND BUILD SLOWLY. Carter wanted a morning meditation habit. Her first goal? Just 30 seconds on the cushion. Thirty seconds is ridiculous—which is just the point. The trick is to do something that requires so little effort that your brain won’t put up any resistance. A new neural pathway will begin... and eventually it will build into an unshakable habit. It takes the time it takes. Be patient. Now Carter is a regular practitioner and forgives herself when she misses a day.

SEE RELAPSE AS AN OPPORTUNITY TO BEGIN AGAIN, STRONGER.
Failure happens. Happiness experts such as Carter know that setbacks are part of the process of making new habits. I like her image of “an upward spiral that has circled back to where it began but now one level higher.”

“It may feel like you are back at square one,” Carter writes, “but neurologically you aren’t. You’re actually in a better place”—armed with new knowledge, more likely to succeed the next time.

ENERGY EXPRESS-O!
WHAT NEW HABIT DO YOU WANT FOR YOURSELF?
“A journey of a thousand miles begins with a single step.”
— Lao-Tzu —

Marilynn Preston is the author of Energy Express, America’s longest-running healthy lifestyle column. Her new book All Is Well: The Art {and Science} of Personal Well-Being is available now on Amazon and elsewhere. Visit Creators Publishing at creators.com/books/all-is-well to learn more. For more on personal well-being, visit www.MarilynnPreston.com. © 2017 ENERGY EXPRESS LTD