HomeFeaturesWhat Can Yoga Teach Us

How This Family Took Control and Founded the Arrhythmia Alliance

One morning, 9-month-old Francesca Lobban was playing with her older sister as their mother stood nearby. Francesca was just learning to walk and, as all toddlers do, she lost her balance, gently plopped onto her bottom on the carpeted floor … and lost consciousness.

Alarmed, Trudie Lobban rushed her daughter to the hospital, but by the time they were seen by a doctor, her daughter was alert and behaving normally. For three years, the attacks continued—up to eight per day—each one triggered by circumstances as benign as a game of peek-a-boo, or stepping on a Lego piece. Doctors offered up possible explanations ranging from lack of sleep to temper tantrums to epilepsy, but all tests came back negative.

Desperate for answers, Trudie took her daughter from their home in England to see Dr. John Stephenson, a pediatric neurologist practicing in Scotland. That day, as Trudie held her three-year-old in her arms, Dr. Stephenson triggered an attack by ocular compression, causing Francesca’s heart to stop for 28 seconds. The test confirmed his suspicions, and Francesca was diagnosed with Reflex Anoxic Seizures (RAS).

RAS is a condition caused by an oversensitive Vagus nerve, which controls reflexive actions such as blinking, breathing, and heart rate. Any unexpected shock to the system causes the Vagus nerve to shut down, resulting in cardiac arrest and syncope (a temporary loss of consciousness). While the heart automatically ‘reboots’ within 30 seconds, for parents who must stand helplessly by, waiting for their child’s heart to start beating again, it can seem like hours.

That diagnosis changed everything. Not only did it identify the cause of Francesca’s attacks, but it marked the beginning of Trudie’s lifelong advocacy for families like hers struggling with the condition. Trudie still remembers her response when Dr. Stephenson asked her to organize a support group for RAS families in the UK. “I told him: I’ll do this, but I am not a nurse, I’m not a doctor. I am a mother of a child that keeps losing consciousness, and I don’t know why.”

That year, STARS (Syncope Trust And Reflex Anoxic Seizures) was born, starting at Trudie’s kitchen table and eventually expanding into the garage and beyond. Trudie’s daughters, Charlotte and Francesca, were put to work stuffing envelopes and drawing pictures for newsletter covers. However, instead of a “few phone calls” as Dr. Stephenson had predicted, there have been hundreds of thousands over the years. 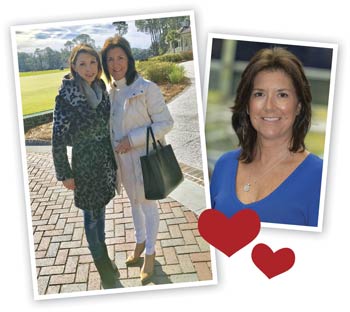 When speaking with parents of recently diagnosed children, Trudie offers this advice: “Do not wrap your child in cotton wool,” she says. “Let them experience the normal things in life but prepare them ahead of time about what might happen.” Good advice for all parents, but even more so with this population since attacks are triggered by the unexpected.

One day at school, Francesca’s class was to receive their vaccinations. When it was Francesca’s turn, Trudie, who had accompanied her, calmly explained that it would hurt and that she wanted her to watch the needle as it went in. “The nurse looked at her like she was the worst mother in the world,” Francesca remembers with a smile, but the advice worked. She got through the procedure without a hitch.

In the early 1990s, the Lobban family began vacationing on Hilton Head Island. During one visit, an older man sitting on the beach overheard Trudie’s repeated warnings to her daughter and asked her about it. Trudie calmly explained about Francesca’s condition. The next day, the man—a local pediatrician—returned and thanked her. It turned out that the symptoms Trudie had described to him were identical to those of his colleague’s daughter. Because of their conversation, the child’s mystery condition was finally diagnosed.

Now an adult, Francesca has learned to manage her condition, averaging 2-3 attacks per year. Some believe that children naturally grow out of this condition, but Francesca believes that it’s more a matter of learning to better anticipate the consequences of their actions (and avoiding unnecessary surprises) as they mature.

In truth, RAS can occur across all age groups. Actor Roger Moore, who once fainted while on stage, was later found to have this condition. Trudie tracked down his phone number and left him a message explaining that his syncope might be caused by RAS. To her astonishment, he called her back, confiding that he’d had fainting episodes since childhood. Soon after, Moore became a STARS supporter.

Eventually, Trudie founded Arrhythmia Alliance, a coalition of charities, patients, caregivers, and medical professionals working together to improve the diagnosis, treatment, and quality of life for those affected by arrhythmias, including RAS and Atrial Fibrillation. Their motto, “There is no such thing as a simple faint,” stresses the importance of taking fainting seriously, as it might signal serious underlying—and potentially fatal—heart rhythm problems.

Tragically, in 2008, Trudy’s husband Charles died from sudden cardiac arrest. “He had just brought me breakfast,” Trudie recalls. “As he was walking out of the room, he said, ‘Trudie, I think I’m going to faint.’” He collapsed and couldn’t be revived. Trudie still finds a painful irony in his last words.

Francesca took time off from university after her father’s death, but eventually returned and graduated with a degree in Property and Business Management. While she considered staying in London after graduation, the pull of family was too strong. “I just wanted to give something back,” she says, joining Arrhythmia Alliance in the UK and eventually becoming executive manager for the U.S. headquarters.
The U.S. office, based in Hilton Head, is not far from the Sea Pines home where the Lobbans spend time. Through its ‘Defibs Save Lives’ program, her office is working to place automatic external defibrillators (AEDs) in public places throughout the U.S. They also offer regular “Check your pulse” programs to teach individuals how to detect irregularities in their heart rate and heart rhythm.

It has been a remarkable journey, more than 25 years in the making. Trudie is now recognized as a world expert in the care and treatment for those affected by cardiac arrhythmias. She has been named a Member of the British Empire—a high honor bestowed personally by the Queen at Buckingham Palace, as well as an honorary Fellow of the Royal College of Physicians. Her daughter Charlotte has gone on to practice medicine. And Francesca, the little girl who inspired them all with her resilience and strength, continues the work her mother started, ensuring that those affected by heart arrhythmias will always have the support and answers they need.

Get Involved With Arrhythmia Alliance!

Saturday, February 16th
Hearts and Soles 5k Run/Walk in collaboration with Hardeeville Fire Department. All proceeds from the race will be used to purchase and place additional AEDs throughout the Hardeeville community.

Tuesday, February 19th • 9:30 a.m.
Know Your Pulse at Hilton Head Library
For more information on the Arrhythmia Alliance, contact Francesca Lobban at 843-415-1886 or go to www.heartrhythmalliance.org/aa/us.